A summer rite in the NFL: training camp holdouts 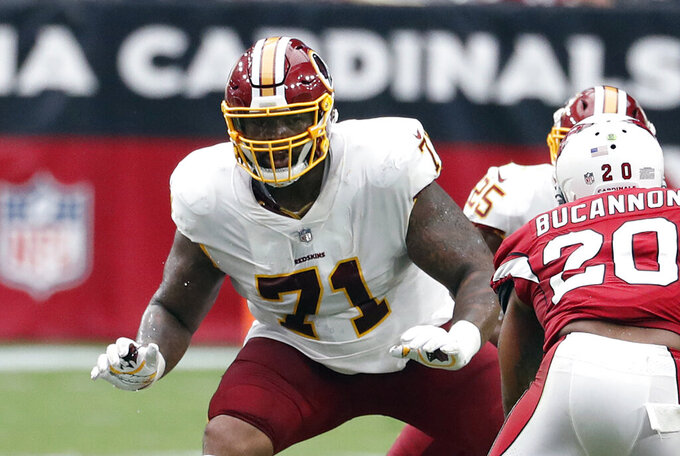 Teammates shrug and go about their work.

Coaches say they can deal only with the players on hand.

Fans worry that this summer rite in the NFL, training camp holdouts, won't hurt their team's chances for a championship.

This year's crop of no-shows includes an All-Pro receiver, the Saints' Michael Thomas ; a versatile and rugged running back, the Cowboys' Ezekiel Elliott; a standout offensive tackle who might be the key to the Redskins' offense, Trent Williams ; and budding stars: defensive ends Jadeveon Clowney of the Texans and Yannick Ngakoue of the Jaguars, and running back Melvin Gordon of the Chargers.

Elliott was not on the Cowboys' charter plane to training camp in California, and Friday team owner Jerry Jones confirmed that his star back was "late." How late Elliott might wind up being is mere projection, but he has proved to be an irreplaceable part in Dallas.

He is due to make $3.9 million in the fourth year of his rookie contract and $9.1 million in the final year, which is a team option. The fourth overall pick from the 2016 draft has won two rushing titles in his three seasons.

"Everybody is under contract," Jones said. "It's a part of what goes on in football. Football is business. It's pro football, you know where you are on every contract. Every contract we have an agreement."

The common denominator in all of this is, naturally, money.

The common approach is for teams to publicly say nothing but nice things about the missing-in-action players while taking a hard line in negotiations.

"I can tell you unequivocally that we want Jadeveon Clowney here," Houston coach Bill O'Brien said. "He's a part of this team. We want him here. There's always a difference when you're talking about money relative to wanting him on the team. That's something that the agent and our organization are working on, but ... we would love to have him here. He's a really talented football player that's made a lot of good plays for us in the past."

While money always is an issue, the dynamics of the holdouts are dissimilar for Williams and Clowney compared to Elliott, Thomas, Gordon and Ngakoue.

Both are veterans, Williams heading into his 10th season, Clowney his sixth. The others are on rookie deals and believe they have far outperformed those wage-scaled contracts.

Williams, while injury prone, is considered a leader in Washington and, even at less than full strength, the Redskins' best blocker. He is upset with the team's handling of his health, including the removal of a growth on his head earlier this year. His beef is as much about trust as dollars and cents.

Clowney has not signed his franchise tag, which is tendered at $16 million, preferring a long-term deal. Le'Veon Bell set a precedent last season when the then-Steelers running back sat out rather than sign. He's now with the Jets. But it's more likely Clowney will reach an agreement by September, or take the $16 million for 2019.

Another pass rusher, Ngakoue, comes off a career-best year and is entering his fourth season. As a third-round draftee in 2016, he isn't making top dollar yet, set to be paid just over $2 million this year. Considering his numbers are as good or better than several other defensive end who cashed in recently (Frank Clark, Demarcus Lawrence), it's hardly surprising Ngakoue is idle.

But he must report to the Jaguars 30 days before their first game to accrue his fourth season and have a shot at unrestricted free agency in 2020. So Aug. 9 would seem to be a firm deadline for him to show up.

Thomas is the focal point for Drew Brees' passes in New Orleans' high-wire offense. Talk about numbers, try 125 receptions, 1,405 yards and nine touchdowns as, by far, the only proven Saints wideout.

In the final year of his rookie contract, Thomas would make more than $1.14 million as a 2016 second-rounder. So there's nothing surprising about his holdout when the likes of Odell Beckham Jr., Sammy Watkins and Nike Evans have cashed in.

Saints coach Sean Payton says he's not surprised by Thomas' holdout, which the receiver foreshadowed on social media by writing: "I want every penny that's mine. I don't want a penny more or a penny less."