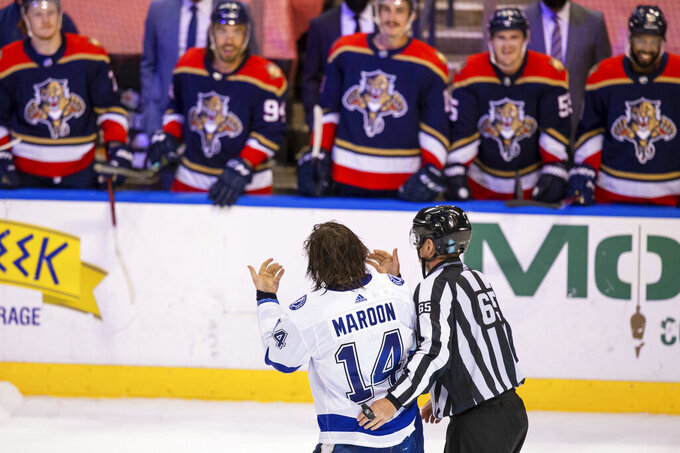 Tampa Bay Lightning left wing Pat Maroon (14) exchanges words with the Florida Panthers bench as he is led off the ice for fighting during the third period of an NHL hockey game on Saturday, May 8, 2021, in Sunrise, Fla. (AP Photo/Mary Holt)

There used to be a thing called the Governor’s Cup, a trophy presented to whichever team won the annual regular season series between the Florida Panthers and Tampa Bay Lightning. It was supposed to be a way of drumming up hockey interest around the Sunshine State.

It never really caught on.

Besides, there are far better things to win than some crystal vase.

The defending Stanley Cup champion Lightning and the upstart Panthers are about to meet in the postseason for the first time. Game 1 of their Central Division opening-round series is Sunday night on the Panthers’ home ice in Sunrise, Florida.

Florida was second in the Central Division, Tampa Bay third.

“I think we made giant strides over the course of the year, from this year to last year,” Panthers coach Joel Quenneville said. “But it doesn’t matter. It’s what we do now going forward.”

The Panthers went 5-2-1 against the Lightning in the regular season, though that seems most irrelevant now given that Tampa Bay’s lineup will be considerably different in this series.

The Lightning are getting forward Nikita Kucherov — whose last game was Sept. 28, which just happened to be the night Tampa Bay hoisted the Stanley Cup. He missed the entire regular season with a hip injury.

“The big thing for me is to not sit here and say ‘Kucherov is coming back, like all problems are solved,’” Tampa Bay coach Jon Cooper said. “That would be the absolute wrong way to look at it. I don’t think anybody should be looking at it that way. He’s an exceptional player in this league and he can make things happen. ... But we have to also be careful in the fact that he hasn’t played a game in eight months, and there’s something to be said for that.”

It’s not just Kucherov returning: The Lightning are also expecting Steven Stamkos back for this series. He hasn’t played since April 8 with a lower-body injury.

They do now. So, all the principals on both sides, except for Florida defenseman Aaron Ekblad, seem as if they will be ready for Game 1.

“This is all I play for, the playoffs,” Florida’s Patric Hornqvist said. “I don’t care about the regular season. I want to win a Cup.”

And he didn’t mean a Governor’s Cup, either.

This is the first time that Tampa Bay gets to defend the Cup a year after winning it; the first Lightning title in 2004 preceded the season that was lost because of a lockout. Since Pittsburgh went back-to-back in 1991 and 1992, only two franchises have successfully defended the Cup -- Detroit won in 1997 and 1998, and Pittsburgh did it again in 2016 and 2017.

Florida’s Alex Wennberg had five goals against the Lightning in the regular season, more than anyone else had in the eight head-to-head meetings. Tyler Johnson and Brayden Point each had four for Tampa Bay; Frank Vatrano had four for the Panthers. Florida’s Aleksander Barkov and Wennberg each had eight points, and Jonathan Huberdeau added seven for the Panthers. Stamkos has 68 points in 34 career games against Florida; no skater has played in more Panthers-Lightning games than he has.

Florida’s Sergei Bobrovsky swept the Lightning out of the playoffs in 2019 when he was in Columbus and will get the Game 1 start for the Panthers. Tampa Bay is going with Andrei Vasilevskiy, who backstopped the Lightning on their way to the title last year and capped it with a Cup-clinching shutout against Dallas in Game 6. But the Panthers scored nine goals off Vasilevskiy in the final two games of the regular season.

Quenneville has won three Stanley Cups as a coach, all with Chicago, and that’s more than any active coach in these playoffs. “His guys play really hard,” Cooper said. “He knows what he wants in a player (and) knows how to get it out of them.” The Tampa Bay-Florida series is one of two first-round matchups featuring two Cup-winning coaches. The other is Pittsburgh against the New York Islanders, with Penguins coach Mike Sullivan facing off against the Isles’ Barry Trotz.

Florida will join California, New York and Pennsylvania as states that have had an in-state NHL playoff series. There have been Sunshine State playoff showdowns in other sports — the Miami Dolphins lost to the Jacksonville Jaguars in the NFL playoffs after the 1999 season, and the Miami Heat beat the Orlando Magic in the first round of the 1997 NBA playoffs.