Super Bowl 55: A Viewer's Guide to get you through Sunday 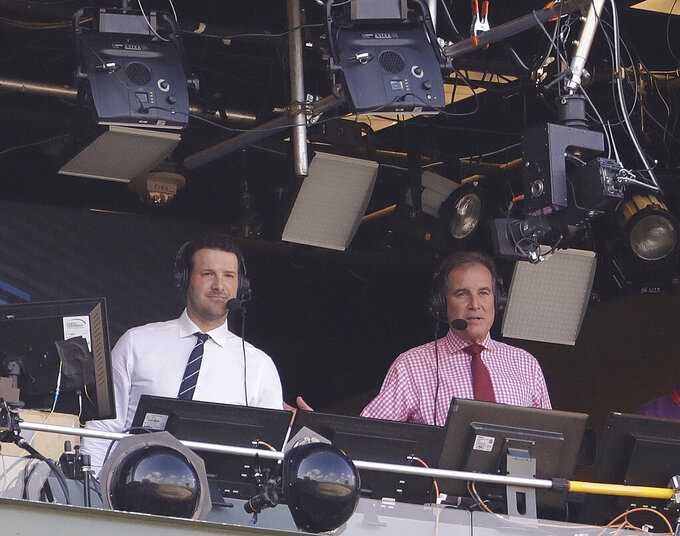 FILE - In this Sept. 24, 2017, file photo, Tony Romo and Jim Nantz work in the broadcast booth before an NFL football game between the Green Bay Packers and the Cincinnati Bengals in Green Bay, Wis. Nantz and Romo were inseparable when CBS broadcast the Super Bowl two years ago. Next week, they won't see each other until they are in the broadcast booth a couple hours prior to kickoff. Keeping announcers separated until game day has been standard practice this season due to the Coronavirus pandemic. (AP Photo/Morry Gash, File)

Here are some things to know about the CBS coverage as well as Super Bowl-related programming on other networks:

This marks the 21st Super Bowl broadcast for CBS, which is the most among all networks. NBC is next with 19 followed by Fox (9) and ABC (7). CBS and NBC both aired the first Super Bowl.

CBS is doing the big game for the second time in three years after agreeing to a trade with NBC, which originally had the rights. NBC will do next year’s game from Los Angeles, If it remains on Feb. 6, will coincide with the first weekend of the network's coverage of the Beijing Winter Games.

Jim Nantz and Tony Romo team for their second Super Bowl. Nantz is handling the play by play for the sixth time. Gene Steratore will be the rules analyst for the second time. Reporters Tracy Wolfson, Evan Washburn and special teams analyst Jay Feely are on their third Super Bowl.

CBS will use 120 cameras, including a trolley cam. It will be positioned to provide the viewing angle of a fan in the eighth row of the stands and can speed from one end of the stadium to the other by ziplining. That camera, as well as others, can be positioned throughout Raymond James Stadium because of crowd restrictions due to COVID-19. By comparison, CBS’ broadcast of the Super Bowl in 1984, which was also in Tampa, had 20 cameras.

Jim Rikhoff is the lead producer for the second time and working his seventh Super Bowl on CBS. Mike Arnold is the lead director for the sixth time.

“The Super Bowl Today” comes on at 2 p.m., leading into pregame ceremonies at 6 p.m. and kickoff at 6:30 p.m. This will be a record 10th Super Bowl pregame host assignment for James Brown and his sixth for CBS.

A look at Kenny Washington, the man who reintegrated the NFL when he signed with the Los Angeles Rams in 1946.

The impact of Whitney Houston's national anthem performance during Super Bowl 25 in Tampa in 1991.

A musically driven piece honoring the doctors, nurses, grocery workers, delivery drivers, restaurateurs and other essential workers for their work during the coronavirus pandemic.

A feature on the role of women in this year's game, including down judge Sarah Thomas, the first female to be on an officiating crew in a Super Bowl.

ESPN’s “Postseason NFL Countdown” will go on the air at 10 a.m. for four hours.

For those with pregame fatigue, the Puppy Bowl kicks off on Animal Planet at 2 p.m., and the Shaq Bowl on Facebook Live at 3 p.m.

FOR THE CORD CUTTERS

The CBS streaming coverage will be available for those who don’t have a subscription on CBSSports.com and the CBS Sports app for OTT devices and services, smart TVs and mobile devices. It will also be available for free on the NFL website/apps as well as Yahoo Sports.

ESPN Deportes will have the Spanish-language broadcast. It will also be streamed on the ESPN App.

Sirius XM will have four channels dedicated to the game. Besides the Westwood One national feed as well as the Kansas City and Tampa Bay broadcasts, the satellite radio service will broadcast the game in Spanish.

After CBS’ broadcast ends, the CBS Sports Network will have an expanded version of “The Super Bowl Today Postgame Show.” ESPN and NFL Network will also have postgame shows.