Super Bowl could be farewell for several pending free agents 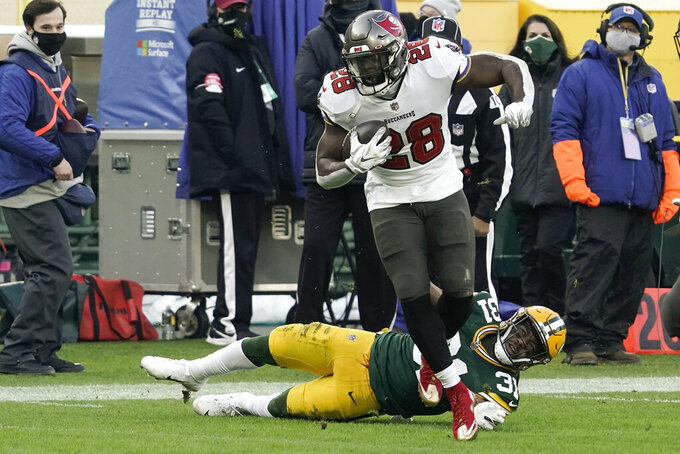 It’s unlikely Patrick Mahomes and Tom Brady will have their same receiving corps next season.

Kansas City and Tampa Bay have several starters, including some notable pass catchers, scheduled to become free agents next month. With the NFL salary cap going down for the first time since 2011 — it’s projected to decrease by more than $20 million because of COVID-19 repercussions — teams will have difficult decisions to make in the coming weeks.

So the Super Bowl between the Chiefs and Buccaneers will serve as a farewell for several players with their current team. Here’s a look at some of the game’s most prominent names slated to hit the open market (in alphabetical order):

—Bucs pass rusher Shaq Barrett, who led the NFL with 19½ sacks in 2019, played under a one-year, $15.9 million franchise tag in 2020. He has 11 sacks this season, including three in the NFC championship game against Green Bay. Tampa is close to $30 million under the estimated salary cap and might spend a good chunk of it on the 28-year-old linebacker.

“I’m not expecting that I would be going anywhere else,” said Barrett, who rented a home the last two years and wants to “start laying roots" in Tampa.

—Chiefs running back LeVeon Bell made nearly $14 million in 2020, with most of that being paid by the New York Jets. He considered signing with Buffalo and Miami before landing in Kansas City, which is unlikely to bring him back. The Chiefs are an estimated $20 million over the projected cap.

—Bucs receiver Antonio Brown might be out of the league if not for Brady. Brown signed a one-year, $1.6 million contract with Tampa in late October and has been a model citizen since. Although he might want to test free agency, it’s unclear if anyone would take a chance on him.

—Bucs linebacker Lavonte David has been a mainstay in Tampa’s lineup for nine years. He’s wrapping up a five-year, $50.25 million deal, but no one would be surprised to see the 31-year-old defensive leader remain in his home state (maybe even at a discounted rate) for the rest of his pro career.

—Tampa Bay running back Leonard Fournette was cut by Jacksonville days before the regular season and landed in Tampa on a one-year, $2.5 million deal. He has provided a nice 1-2 punch with Ronald Jones, but likely will head elsewhere in hopes of becoming a featured back again.

“When I’m healthy, the sky’s the limit,” Fournette said.

—Bucs receiver Chris Godwin missed several games early this season, but the 2017 third-round draft pick from Penn State has proven his worth with five touchdown catches in the last six games. General manager Jason Licht insists Godwin is in the team's long-term plans.

“I’m very much aware off all those different possibilities, but what I’ve done this whole season is to not focus on it,” Godwin said. “At this point, all of those things are out of my control.”

—Veteran tight end Rob Gronkowski came out of retirement to join Brady in Tampa and be close to his mom in Fort Myers. He started every game for the first time since 2011. He has 45 receptions for 623 yards and seven touchdowns after signing a one-year, $9 million deal. If he wants to play another season, the Bucs will find a way to make it work.

—Bucs running back LeSean McCoy has a chance to become the ninth player in NFL history to collect consecutive Super Bowl rings with different teams, joining an exclusive club that includes Deion Sanders and LeGarrette Blount. He’s already weighing his future: whether to stick around a little longer as a backup or retire at age 32.

“If I get a second championship, with everything I’ve accomplished, it might be over,” he said. “You never know. I’ll revisit that later.”

—Chiefs receiver Demarcus Robinson is third on the team with a career-high 45 catches after signing a one-year deal to remain in Kansas City. He hasn’t missed a game in five seasons, but the Chiefs wouldn’t miss him much if he walked.

—Chiefs safety Daniel Sorensen is having a career year. He led the team with 91 tackles in the regular season to go along with three interceptions. He’s on the wrong side of 30, but he would be a bargain at $4 million a year.

—Bucs defensive lineman Ndamukong Suh made six sacks while starting every game for the ninth consecutive season. He turned 34 last month and might be willing to sign another one-year deal to stay in Tampa.

—Chiefs receiver Sammy Watkins has missed 14 games in three years with Kansas City, raising questions about his durability. He took a pay cut to remain with the Chiefs in 2020, but at $9 million, he was far from a bargain. Would be take less to fit around Mahomes’ ballooning contract?

“I want to win,” Watkins said. “Early in my career, I was not like that. I always wanted the ball. I still want the ball, but I understand now it is team goals. The three years I have been here, we have had the opportunities to play in the Super Bowl, and that is what it is about.