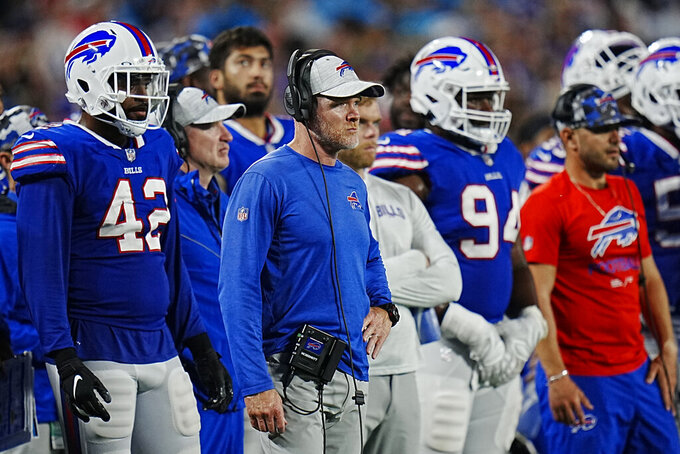 Buffalo Bills head coach Sean McDermott watches during the second half of an NFL preseason football game against the Carolina Panthers on Friday, Aug. 26, 2022, in Charlotte, N.C. (AP Photo/Rusty Jones)

INGLEWOOD, Calif. (AP) — For nearly seven months, Sean McVay has told the Los Angeles Rams their Super Bowl championship guarantees them nothing in this new season except a banner.

“It feels like it was a long time ago,” said McVay, the youngest coach in NFL history to win it all. “It’s one that I’ll always cherish, but I think if you live in the past, you’re going to get exposed in the present. So we’re not going to do that.”

The Rams will unveil that banner Thursday night at SoFi Stadium before they get another reminder of just how little their championship victory on that same field last winter will mean this fall.

The NFL chose Von Miller and the powerhouse Buffalo Bills as the Rams' opponent in their season opener, practically ensuring a difficult start to a season in which they're widely perceived to have the league's toughest schedule. The Rams know they'll get every opponent's best shot this year, starting with a visit from a team holding serious championship aspirations of its own.

“Going in to play the defending Super Bowl champs and watching them raise their banner, that’ll be an interesting feeling, for sure,” Buffalo quarterback Josh Allen said. “I’ve talked to a few people that have played and coached in this game before, and just really the unanimous thing that they were talking about was it feels like playoff atmosphere.”

The Rams are Vegas underdogs in their first game since winning their franchise's second Super Bowl title. In fact, the Bills could send Los Angeles to a place it has never been with McVay — below .500.

The Rams have never lost a season opener or had a losing record at any point in the tenure of McVay, who took over in 2017 and immediately built a perennial winner with general manager Les Snead.

Sean McDermott got his job in Buffalo one week before McVay, and the still-young coaches already have the sixth- and seventh-longest tenures in the league. But while McVay got the ultimate validation last season, McDermott is hoping this will be the year for the Bills' first Super Bowl trip since the 1993 season.

The Rams already did it all in a season filled with superlatives, including the spectacular statistical campaign by Super Bowl MVP Cooper Kupp.

“The question we’re always trying to answer is, how can 2022 be better for the LA Rams?” Kupp said. “What can we do better? Who can we put on the field to stack blocks and build on this thing? Feels good to be back playing a meaningful game.”

Ken Dorsey first made his name in football by going 38-2 as the University of Miami's quarterback from 1999-2002, a stint which included a national championship in 2001. Dorsey now makes his debut as an offensive coordinator, running one of the league's most productive groups after being promoted to replace Brian Daboll.

“Whether you’re a position coach or a play-caller or a head coach, I really feel like you’ve got to go earn it," Dorsey said. "No one’s going to hand you anything. When you get to the point where I’ve been fortunate enough to get to right now, you don’t take it for granted, because you realize how hard it is to get there.”

While Los Angeles lost Miller to a more lucrative offer in Buffalo, it added two key veterans in free agency. Inside linebacker Bobby Wagner debuts as the defensive signal-caller for his hometown team after a decade in Seattle, while receiver Allen Robinson takes over as Kupp's counterpart.

The biggest question mark looming for Buffalo's defense is which rookie — Kaiir Elam or Christian Benford — will start at cornerback opposite Dane Jackson in their vaunted pass defense with Tre’Davious White sidelined by a left knee injury and Levi Wallace gone in free agency.

Elam is Buffalo’s first-round pick out of Florida, while Benford was a sixth-round selection out of Villanova. Both were locked in competition through the preseason.

“We’re still working through that,” McDermott said. “Everything we try and do is to give our team the best advantage to win, and do right by the players on our team, and make sure that they’re in the right headspace to play their best football, particularly for these two rookies.”

Donald enjoyed his brief chance to play with another fellow Hall of Fame-caliber defender last season, but the seven-time All-Pro said he hasn't spoken to Miller this week.

“If anything, we had conversations more about leadership things, being more of a vocal guy,” Donald said. “I give a lot of credit (to Miller) definitely for that playoff run. Having conversations with Von, I feel like he challenged me with some things as a vocal leader, and I stepped in when I needed to. Always respect and love Von for that. We created some special things, so we miss him.

"But he’s on the opposite side now, so he is the enemy.”

Miller has too much respect for Donald to even begin to suggest there's a way to contain him.

“There is no weakness,” Miller said.

“I’d be setting them up for failure if I tell them, like, 'If you just do this, you’ll be all right.′ Like, he’s good at everything,” he added. “Aaron Donald’s going to make plays, and we just got to find ways to make just one more play than those guys.”