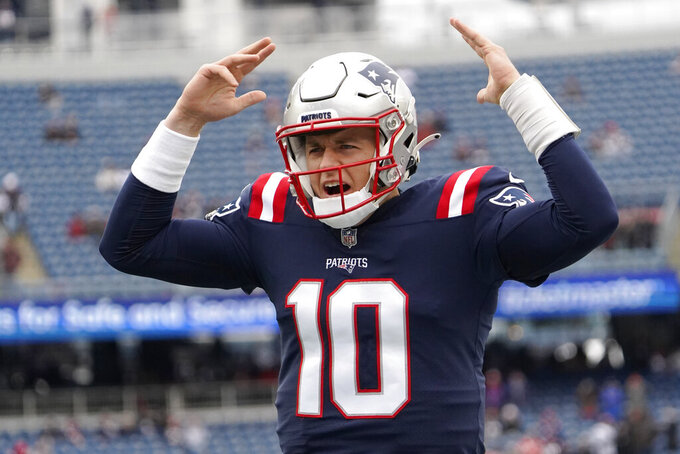 BETTING LINE: New England by 2 1/2, according to FanDuel SportsBook.

TURNOVER DIFFERENTIAL: Patriots plus-10, Bills plus-9.

PATRIOTS PLAYER TO WATCH: QB Mac Jones. He enters Monday leading rookie quarterbacks with 2,850 passing yards and 16 touchdowns. He’s also completed 70% of his attempts in eight of his first 12 starts. He can tie Dallas QB Dak Prescott’s record of nine such games this week. With a victory he’ll also join Prescott (2016) and Ben Roethlisberger (2004 with Pittsburgh) as the only rookie quarterbacks to win each of his first six road games.

KEY INJURIES: Patriots S Kyle Dugger, who leads the team with 75 tackles, was added to the reserve/COVID-19 list Dec. 1 and could be unavailable. LB Jamie Collins could be active for the first time in three games. He returned to practice Wednesday after spending the past three weeks on injured reserve with an ankle issue. ... Aside from losing White to a season-ending knee injury, the Bills are getting healthier. Starting DT Star Lotulelei and starting RT Spencer Brown returned to practice this week after being cleared from the reserve/COVID-19 list. G Jon Feliciano is also eligible to return after missing four games with a calf injury.

SERIES NOTES: The Bills last year swept the season-series against the Patriots for the first time since 1999. From 2000 to 2019, New England had a 35-5 record against Buffalo. ... The Bills haven’t swept the Pats in consecutive seasons since doing so in 1992 and ’93. ... The Patriots' 76 wins (including one postseason) are their most against one opponent.

STATS AND STUFF: The Patriots had an 11-year run of winning the AFC East end last year, when they finished third, and Buffalo claimed its first division title since 1995. ... New England has won six straight, the team’s best streak since opening the 2019 season 8-0. The Patriots have won six or more in a row 15 times since 2001, which marks the most in the NFL over that span. Green Bay is second in that category with eight runs of six or more wins. ... The Patriots are 5-0 on the road this season, and have finished undefeated on the road twice in franchise history (2007 and 2016). … New England’s defense enters the week allowing a league-low 15.8 points per game. Since 2001, the Patriots have allowed 20 points per game or fewer 13 times, tied for the second most in the NFL over that span. … The Patriots lead the NFL with 19 interceptions. They also have returned three of them for touchdowns, tied with Dallas for the league lead. The Patriots have four takeaways in each of their past two games. … RB Damien Harris leads the Patriots with a career-high eight rushing TDs. He has three 100-yard rushing games. … TE Hunter Henry has seven touchdown receptions and needs one more to match the eight he had as a rookie with the Chargers in 2016. Rob Gronkowski is the only Patriots tight end to reach 10 TD receptions in a season. … WR Kendrick Bourne has 42 catches for 623 yards and five TDs. He needs eight more receptions and 45 more yards to set single-season personal highs in both categories. … LB Matt Judon has a team-leading 11 1/2 sacks. With his next sack he’ll join Chandler Jones (12 1/2 in 2015) and Mike Vrabel (12 1/2 in 2007) for the most sacks in a season by a player under Bill Belichick. … K Nick Folk enters the week with an NFL-leading 31 field goals. Since the 1970 merger, the Patriots have had a player finish first in the NFL in field goals five times. Stephen Gostkowski was the last in 2014. ... The Bills haven’t won consecutive games since winning four in a row with a 38-20 victory at Kansas City on Oct. 10. ... Allen has eight TDs and eight turnovers (seven interceptions, one lost fumble) in his past four outings. ... With two interceptions against New Orleans, Allen improved his career record to 18-15 in the regular season when committing a turnover. ... WR Stefon Diggs has four TDs receiving in the past three outings, and has never had a four-game TD streak in his seven-year career. Diggs had nine catches for 145 yards and three TDs in Buffalo’s last meeting with New England. ... RB Matt Breida has combined for 17 carries for 105 yards and a TD, and six catches for 67 yards and two scores in his past three games after being inactive in six straight. ... Dawson Knox is tied with New England’s Henry for the NFL lead with seven TDs among tight ends, and tied for second overall in TDs receiving. ... S Jordan Poyer has five interceptions including two in his past three outings.

FANTASY TIP: Difficult to trust Jones against a Bills defense which, since the start of the 2019 season, has gone 13-1 against opposing quarterbacks with 16 or fewer starts. Buffalo's only loss came against Jacksonville’s Trey Lawrence four weeks ago. In those 14 games, the Bills have allowed 10 TDs passing and combined for 22 interceptions and 34 sacks.