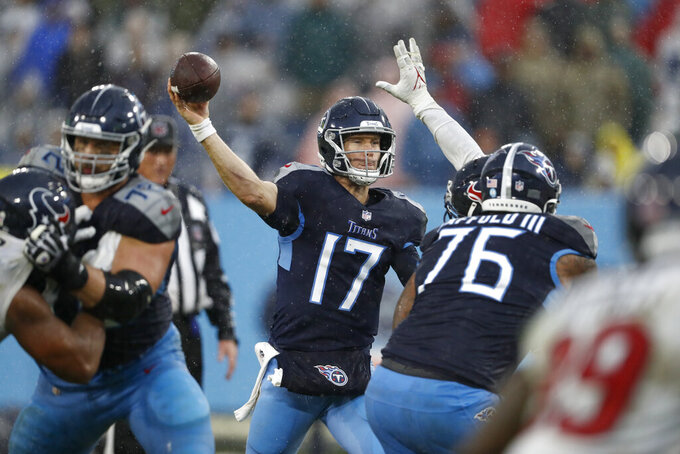 BETTING LINE: Patriots by 6, according to FanDuel SportsBook.

TURNOVER DIFFERENTIAL: Titans minus-3; Patriots plus-6.

TITANS PLAYER TO WATCH: QB Ryan Tannehill. He's coming off the first four-interception game of his career and his 12 interceptions are worst in the NFL. He also has been sacked 31 times, tied for most in the league. With a banged-up receiving corps, Tannehill is going to have to be precise with his passes.

PATRIOTS PLAYER TO WATCH: S Kyle Dugger. He leads the Patriots with 66 tackles (52 unassisted) to go along with three interceptions. In just his second season out of Division II Lenior-Rhyne, Dugger is showing exactly why New England used a second-round draft pick on him.

KEY MATCHUP: Titans' defense against rookie QB Mac Jones. Tennessee has a tradition of struggling against rookie quarterbacks, including a loss to the Jets earlier this season. The Titans did not get a sack last week for the first time in 2021 and also didn't force a turnover.

KEY INJURIES: Titans WR A.J. Brown was among nine Titans who did not practice Wednesday on an injury report featuring 15 players for a team with 17 on injured reserve. Starting RG Nate Davis has missed two of the last three games (concussion); LB Rashaan Evans the last four (ankle); starting LB David Long the last two games (injured hamstring); and starting DL Teair Tart (ankle) was out two of the past four games. Pats leading rusher Damien Harris now is dealing with a neck injury after missing a game with a concussion. TE Jonnu Smith (shoulder) missed a game two weeks ago with the same injury. RT Trent Brown now has an injured calf two weeks after returning from injured reserve.

SERIES NOTES: The Patriots have dominated this series over the years, winning 10 of 12 before Tennessee hired Mike Vrabel as head coach. Now the Titans with Vrabel have won two straight, including a wild-card game that was Tom Brady's last performance in a Patriots uniform.

STATS AND STUFF: The Titans are 4-1 on the road this season and 13-3 over their last 16 road games. ... The Patriots (5-1) and Titans (5-2) have the best conference records in the AFC. ... The Titans have used an NFL-high 82 players who've played in at least one game this season, eight more than the next-closest team, the Jets with 74. Their 46 starters used trail only the 47 starters used by the Saints. ... The Titans are tied with Buffalo for most different players with 100-yard receiving games with four, two of them now on injured reserve. ... The Titans rank ninth in the NFL with 27 sacks. OLB Harold Landry has a career-high 10 sacks, and DT Jeffery Simmons has a career-high 7 1/2. ... Tannehill threw for 323 yards last week and needs 319 yards passing for his sixth career 3,000-yard season. ... Titans RB Dontrell Hilliard had a career-high 82 yards from scrimmage last week. ... Titans WR Nick Westbrook-Ikhine set career highs with seven catches for 107 yards last week. ... The Patriots are allowing a league-low 16.1 points per game on defense. They have finished in top 10 in fewest points allowed in each of the last nine seasons, the longest current streak. … The Patriots lead the NFL with a plus-123 point differential in 2021. Buffalo is second with plus-119 point differential. … Jones has completed over 70% of his passes in seven of his first 11 NFL games. The rookie record is nine games by Dak Prescott. The NFL record is 13 games by Drew Brees in 2017. ... Jones leads all rookie quarterbacks in passing yards (2,540), completions (245), completion percentage (70.2) and touchdown passes (14). Only three rookie quarterbacks have ever passed for at least 4,000 yards. … TE Hunter Henry has seven touchdown receptions and needs one more to match the eight he had as a rookie with the Chargers in 2016. Rob Gronkowski is the only Patriots tight end to reach 10 TD receptions in a season. … CB J.C. Jackson (23) leads the NFL in interceptions since entering the league in 2018. … LB Matt Judon leads the Patriots with 10 1/2 sacks and is tied for third in the NFL. With his next sack he will join Tony McGee, Andre Tippett, Chandler Jones, Vrabel, Willie McGinest and Garin Veris as the only Patriots players to reach at least 11 sacks in a season. … PR/KR Gunner Olszewski is second in the NFL with a 12.6-yard punt return average. He led the NFL with a 17.13-yard average in 2020. … K Nick Folk leads the NFL with 26 field goals. ... The Patriots have scored in the first half in 97 consecutive games (regular season and playoffs), an NFL record.

FANTASY TIP: Patriots RB Damien Harris has rushed for a touchdown in five of his last six games and has 100-yard efforts in his last two home games.