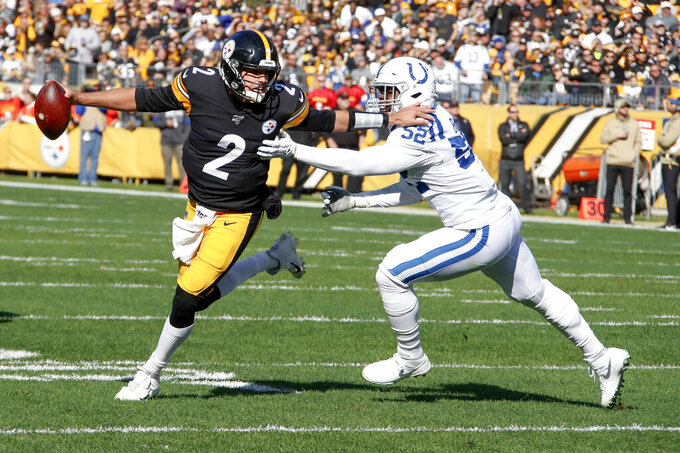 PITTSBURGH (AP) — The franchise quarterback hasn't taken a snap since the middle of Week 2 and has essentially become the highest-paid assistant coach in the NFL. The guy tasked with taking over left his third career start after getting knocked unconscious. The running game is a bit of a mess. The wide receivers have struggled to find any sort of identity or consistency.

And yet the Pittsburgh Steelers reached the midpoint of a chaotic season very much alive following a 26-24 victory over Indianapolis on Sunday. Their third straight win pushed them to 4-4.

"We will work forever trying to get that September stench off of us," coach Mike Tomlin said. "But that is life in this thing, and I appreciate the effort and fight."

Pittsburgh's resurgence has been led by a defense that's regained its swagger behind the kind of "splash" plays it missed so desperately in 2018. The Steelers managed just 15 takeaways last season, next-to-last in the NFL. They've already produced 22 in 2018, including safety Minkah Fitzpatrick's 96-yard pick six in the second quarter against the Colts, his fourth interception since arriving in a trade with Miami in mid-September.

Pittsburgh raised eyebrows when it sent a 2020 first-round pick to the Dolphins in exchange for Fitzpatrick, a move made just hours after a right elbow injury ended Ben Roethilsberger's season. The message was clear: The Steelers had no intention of bailing on 2019 with Mason Rudolph taking over. Tomlin stressed the team's standards wouldn't change regardless of the personnel and while the offense remains a work in progress, Pittsburgh has found a way to survive.

Maybe, but Pittsburgh's remaining schedule is decidedly user-friendly. Only two of the Steelers' remaining opponents currently have a winning record. Then again, the margin for error is slim. Five of Pittsburgh's eight games have been decided by a touchdown or less, and if Colts kicker Adam Vinatieri hadn't snap-hooked his go-ahead 43-yard attempt in the final minute on Sunday, the Steelers could be two games under .500 and fading.

But Vinatieri missed. And the Steelers survived.

"Four-and-four is a good spot to be at," Fitzpatrick said. "Could be better. It's not where we want to be at, but it's all we could be right now. It's a good spot for us. We've just got to keep fighting."

Fitzpatrick's arrival gave the Steelers eighth first-round picks on the starting defense. The group is playing up to its pedigree. It's not just the turnovers. Pittsburgh has already collected 29 sacks, including five on Sunday against an Indianapolis line that had allowed 11 all season coming in. The Steelers did it without defensive end Stephon Tuitt, lost for the season after tearing a pectoral muscle against the Los Angeles Chargers on Oct. 13. Even with Tuitt out, the Steelers have been able to consistently generate pressure, particularly the outside linebacker tandem of Bud Dupree and T.J. Watt, who have combined for 13.5 sacks.

"When you draft them in Round 1, that is what they're supposed to look like in their mid-20s," Tomlin said.

Rudolph has been steady if not spectacular since replacing Roethlisberger, completing 66% of his passes with 10 touchdowns and three interceptions. He also hasn't been much of a difference maker in the red zone. The Steelers converted just 1 of 4 red-zone possessions into touchdowns against Indianapolis. Pittsburgh is in the bottom quarter of the league in red-zone touchdown percentage (38, a number that needs to change if the Steelers want to take some of the pressure off the defense.

"We're looking to do our part more," Rudolph said.

The Steelers exercised their fifth-year option on Dupree for 2019 but chose not to sign him to a contract extension. Dupree said he was fine with the decision because it gave him an opportunity to bet on himself. He's already matched his career high in sacks (six) and has become more effective against the run. He shed two blockers to tackle Colts running back Marlon Mack for a 3-yard loss on third down with less than 2 minutes to go on Sunday, a stop that pushed Indianapolis back and assured the Steelers they would get the ball back if Vinatieri's kick had split the uprights.

A consistent running game would take some of the pressure off Rudolph. The Steelers are averaging just 3.8 yards per carry and have done little in short-yardage situations, including near the goal line.

The seriousness of running back James Conner's shoulder injury is uncertain. Rookie Benny Snell is also out with a knee injury. Roethlisberger's injury could have been catastrophic but instead became a rallying point for a team that believes it is far more than Roethlisberger's supporting cast.

33: Receptions for JuJu Smith-Schuster a year after had 111 catches and emerged as a star. Defenses are keying on Smith-Schuster with Antonio Brown gone. Offensive coordinator Randy Fichtner needs to find ways to create more 1-on-1 matchups.

The Steelers hope Rudolph can shake off the early game issues that have cropped up since the second-year quarterback's return from a concussion.