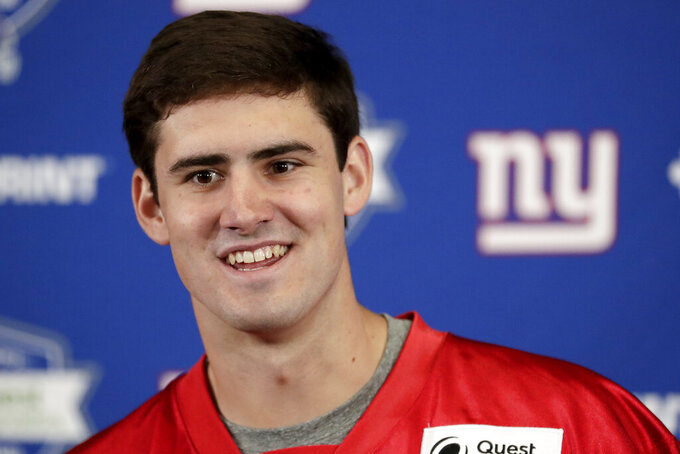 EAST RUTHERFORD, N.J. (AP) — Getting a chance to watch Taysom Hill do his thing as the New Orleans Saints' multi-faceted third-string quarterback was enough to convince coach Pat Shurmur the New York Giants needed someone who could do that all this season.

Shurmur may a found a possible solution in Syracuse quarterback Eric Dungey, who was not drafted last week.

The Giants signed Dungey to their 90-man roster Thursday as draft picks and rookies reported for a short minicamp.

Having a Hill-type player is quickly becoming an NFL fad. The former BYU product was used as a runner, a passer, a receiver, a returner and a special teams' guy this past season in helping the Saints reach the NFC title game.

Against the Giants in a 33-18 win last season, Hill ran four times for 28 yards, threw a fourth-down pass out of a punt formation for 10 yards and a first down and handed off to Alvin Kamara out of a shotgun formation on a 9-yard touchdown run. His passing and running also contributed two field goals.

"That was one of the things he talked to me about," Dungey said Friday of his conversation with Shurmur after the draft.

Dungey has a lot to offer. In 39 games for the Orange over the past four seasons, the Lake Oswego, Oregon, resident threw for 9,340 yards with 58 touchdowns and 30 interceptions. He also ran for 1,993 yards and 35 touchdowns.

When the Giants released their roster for the camp, it wasn't surprising the 6-foot-4, 226 pound Dungey was listed as a quarterback/tight end.

Winning the quarterback job will be tough. Two-time Super Bowl MVP Eli Manning is back, and New York chose Daniel Jones of Duke with the No. 6 pick overall last week. Kyle Lauletta, a fourth-round pick last year, also is on the roster along with veteran Alex Tanney.

Dungey would have to start at No. 5 on the depth chart.

"I just want to be able to compete, that's what makes me the best," Dungey said. "Daniel is a great quarterback but like I said, coach offered me an opportunity to play multiple positions and a chance to play quarterback. If I can do that and learn the offense to the best of my ability, I am looking forward to doing everything I can to help out."

While excited about the opportunity, Dungey's heart was torn Friday. He was thinking of his father, Tim.

"He was just diagnosed with cancer yesterday," Dungey said. "It's been rough. We are just hoping for the best. I know he is a strong guy, so he is going to pull through."

Dungey said doctors found something in his father's kidney and need to conduct more tests.

"He is a huge part of my life," Dungey said. "He has just made me the man I am today, and my mom. I always looked up to my dad growing up. He was someone who played football, basketball and baseball. He has just been a great role model. No matter what adversity he faces he always just cares about us and pushes through it."

Eric Dungey is taking a similar approach to the NFL. He knows as a free agent he can be cut at any time. He has to give it his best every second.

""I'm just kind of living in the moment," Dungey said. "I am just kind of putting my nose down. I feel when I can look back on it I may be able to embrace it more. Right now, it's just a job and I am trying to make a name for myself."