Tale of Two Seasons: Falcons turn it around after 1-7 start 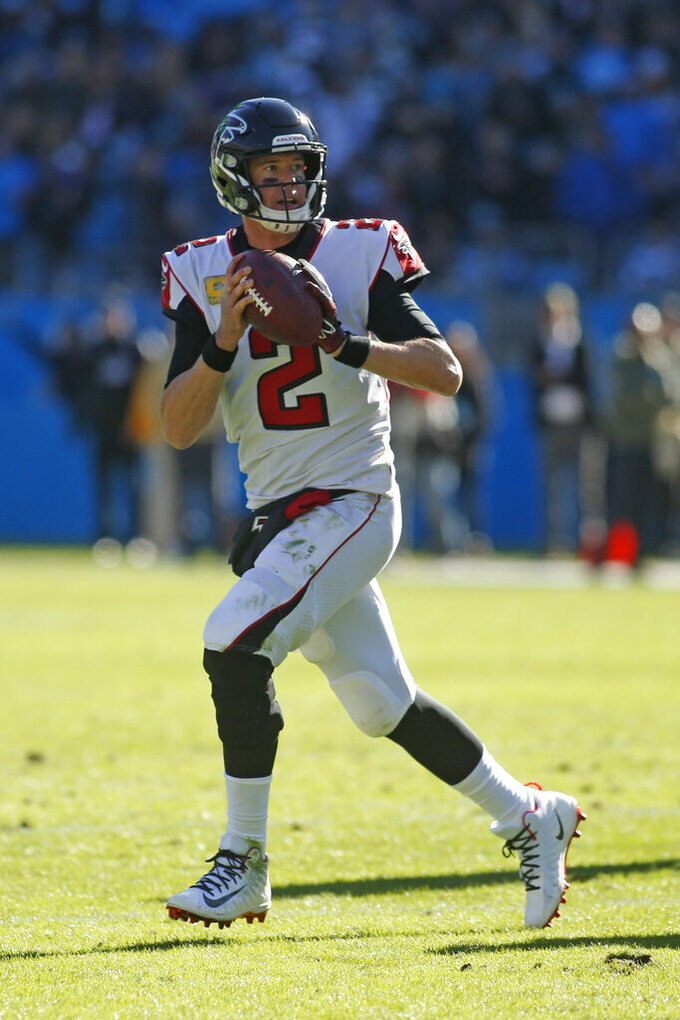 Atlanta Falcons quarterback Matt Ryan (2) looks to pass against the Carolina Panthers during the first half of an NFL football game in Charlotte, N.C., Sunday, Nov. 17, 2019. (AP Photo/Brian Blanco)

They’ll try to come up with this reason or that, but the perplexed looks betray that they’re just as baffled as everyone else.

In a tale of two seasons, Atlanta suddenly looks like the team the Falcons were expected to be all along.

Unfortunately, they only showed that form after a 1-7 start, which likely left too deep a hole and not enough time to pull off an improbable playoff run.

Still, the mood is a whole lot sunnier around Flowery Branch.

Two straight dominating road wins over division opponents will do that to a team.

“This is what I hoped we would look like,” coach Dan Quinn said.

After romping past first-place New Orleans 27-9 in perhaps the most surprising result of the season, the Falcons (3-7) followed up with a 29-3 rout at Carolina last weekend.

Atlanta will try to stretch its out-of-nowhere winning streak to three in a row against the Tampa Bay Buccaneers (3-7) on Sunday, the first of three straight home games and a chance to vacate last place in the NFC South.

“It’s a question that I’ve obviously been struggling with the first part of the season,” Quinn said. “You looked under the hood and everything looked right, but it just wasn’t running like you’d hoped it would.”

After the Falcons’ sixth straight loss, Quinn took advantage of a bye week to thoroughly assess his team.

The biggest change was a shake-up of the coaching staff, with Raheem Morris moving over to work with the secondary after serving as receivers coach. Also, while Quinn remains the defensive coordinator, he has largely turned over the responsibility for callings plays to Morris and linebackers coach Jeff Ulbrich.

The results have been striking. The Falcons did not allow a touchdown in the last two games, a streak that actually stretches back 10 quarters to their Week 8 loss to Seattle. They’re suddenly getting pressure on opposing quarterbacks, registering 11 sacks against the Saints and Panthers after managing just seven over their first eight games. They had four interceptions against Carolina, further fueling the turnaround.

“For whatever reason, our focus has been up and down,” Quinn said. “But what I can say is the players are the ones — man, they really ramped up their focus, their communication, their cohesiveness and their chemistry. When all those things are happening, that’s when the powerful stuff happens.”

Safety Ricardo Allen was all smiles after practice Wednesday.

Some players are still toying with the idea of making the playoffs, though that seems highly unlikely.

The best the Falcons can finish is 9-7, which means the Saints (8-2) only have to win two more games to ensure they can’t be caught by Atlanta in the division race. The wild-card picture is the same, with Seattle (8-2) and Minnesota (8-3) both comfortably ahead of the Falcons.

“As a player, as an athlete, as a competitor, absolutely, you’re trying to look at every way,” running back Kenjon Barner said, glancing at his phone to mimic going through all the various scenarios. “OK, if they lose and we win ... yeah, we’ve had those conversations.”

Jerome Henderson, the passing game defensive coordinator, credited the players for taking ownership of their predicament.

“It’s guys just saying, ‘This isn’t us,’” Henderson said. “A lot more player-led meetings. A lot more getting together and talking through issues and just saying, ‘We’re not going to leave the practice field with any gray.’”

In their quieter moments, the coaches and players are surely frustrated that it took so long to find a winning formula.

They’re doing their best not to look back.

The present — and the future — suddenly looks so much more promising.

“I wish you could change the past, but you can’t,” Quinn said. “Now, can we throw everything we have into this moment?”

Notes: P Matt Bosher was back at practice, beginning his 21-day window to return from injured reserve. Bosher went on IR after Week 4 with a groin ailment. He is eligible to return to the active roster for the Dec. 8 game against Carolina. ... S Kemal Ishmael (concussion) has already been ruled out and will miss his second straight game. ... The Falcons claimed their second straight NFC special teams player of the week award. Barner was honored after returning a punt 78 yards for a touchdown.