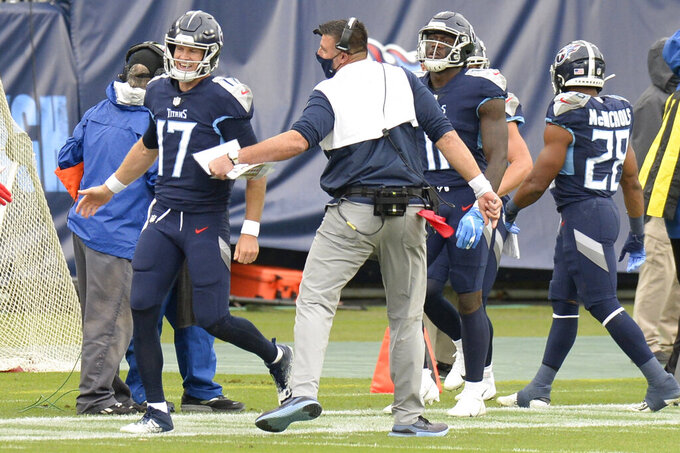 Tennessee Titans head coach Mike Vrabel celebrates with quarterback Ryan Tannehill (17) after a touchdown against the Houston Texans in the first half of an NFL football game Sunday, Oct. 18, 2020, in Nashville, Tenn. (AP Photo/Mark Zaleski) 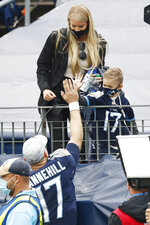 NASHVILLE, Tenn. (AP) — Tennessee now has had a full 16 regular season games with Ryan Tannehill as its starting quarterback over the last year and a half, and the Titans are 12-4 during that span.

Tannehill has thrown 37 touchdowns with only seven interceptions while running for five more TDs during the stretch. The player who led the NFL in passer rating in 2019 at 117.5 has a league-best 116.5 passer rating over those 16 games.

Only Russell Wilson has thrown more TDs with 39 in the stretch.

Not bad for someone who was discarded and traded away as a backup before becoming a starter again. Tannehill's making the case to part of conversations debating the NFL's best quarterbacks.

“It’s been a growing year and a half from being traded here as a backup, starting the season off as a backup, getting opportunity, kind of jumping into that role, trying not to look back in and just growing and learning,” Tannehill said Wednesday.

The Titans rewarded Tannehill for going 7-3 after being moved into the starting lineup in mid-October 2019, signing him to a four-year, $118 million deal in March. It's a deal that almost looks cheap now with Tennessee off to a 5-1 start — the franchise's best since 2008.

Pittsburgh coach Mike Tomlin noted last week that what Tannehill is doing in Tennessee is different than what the Miami Dolphins asked.

“Obviously, the presence of (Derrick) Henry and his impact on the game and the way it reduces you and limits you, in terms of the variety of things that you can show in an offense, probably changes the nature of his job as well,” Tomlin said. “It’s just a lot of differences. One’s Miami, one’s Tennessee.”

The quarterback said the Titans are a special team with a great organization, good coaches and players.

“You put all those things together, and it adds up to better results on the field,” Tannehill said. "So thankful for the opportunity to be a part of this organization, part of this team. And thankful for the teammates that I have around me that make going out there and playing each and every day a ton of fun, and obviously winning is a lot of fun as well.”

After an offseason to hone both chemistry and the offense, there's been little drop-off in Tannehill's performance. He is tied for sixth with 15 TD passes this season, and he's eighth completing 68.5% of his passes. Tannehill is fourth with a 112.3 passer rating, trailing only Wilson, Aaron Rodgers and Derek Carr.

As a result, the Titans rank fourth scoring 31.3 points a game as they prepare to visit Cincinnati (1-5-1) on Sunday.

“Some changes we’ve made have paid off in big ways for us,” Tannehill said. "So we’re just constantly trying to look to evolve and and keep pressure on the defense. So, you know, personally, it’s not really a time to reflect too much. It’s time to get ready and and try to go win our game in Cincinnati.”

Tannehill won over Titans coach Mike Vrabel and his Tennessee teammates with toughness and decisiveness with the ball. Tannehill also isn't afraid to tell teammates exactly what he's looking for, making communication clear.

With Tannehill as starter, the Titans rallied to win three times on game-winning drives in the final two minutes or overtime last season. He led them to four such comebacks in their first five games this season and just missed a fifth last week in a loss to Pittsburgh.

“We got a lot of confidence in him, a lot of trust, and he’s one of those guys that continues to improve and try to get better and continue to work within the offense," Vrabel said.

Tight end Jonnu Smith has a career-high five TD catches after working out with Tannehill in south Florida during the offseason. He sees Tannehill being a man of his word and taking accountability as one of the biggest traits he admires about his quarterback.

Notes: The Titans designated RB Senorise Perry to return from injured reserve, opening up the three-week window for practice.