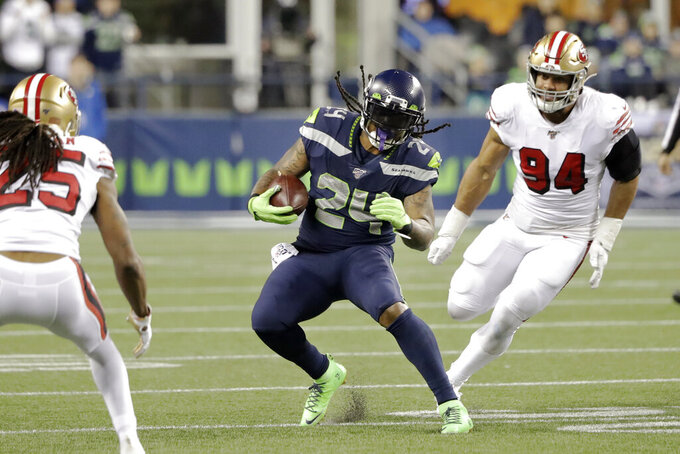 NFL teams playing this weekend have a tough road to Miami for the Super Bowl.

How difficult is it for the teams seeded Nos. 3-6?

Since 1990, when the current 12-team playoff format was introduced, it's happened only 12 times and none since the 2012 Ravens.

Meanwhile, teams with a first-round bye have reached the Super Bowl 46 times in that span. Only two No. 3 seeds, seven No. 4s, one No. 5 and two No. 6s have advanced.

There's even more reason to think the teams playing wild-card weekend won't make it to February.

Since the league instituted a seeding system in 1975, the No. 1 or No. 2 seeds have reached the Super Bowl 71 times while all other seeds got there 17 times. Only 10 of the 44 champions in that span were seeded Nos. 3-6.

Six playoff teams won at least 12 games, tied for the most such teams in a single postseason in NFL history. It also happened in 2011 and 2003. The combined winning percentage of this season's field is .708, the highest since it was .719 in 2005.

Five of the 12 teams to qualify for the playoffs didn't make it last season. Buffalo, Green Bay, Minnesota, San Francisco and Tennessee extended the streak to 30 consecutive seasons at least four teams have qualified for the playoffs after missing out the year before.

The Patriots won the AFC East for the 11th straight season but are playing a wild-card game for the first time since losing to Baltimore in January 2010. A loss at home to Miami cost New England the No. 2 seed. The six-time Super Bowl champions now must win two games to reach their ninth consecutive AFC title game.

Ryan Tannehill will make his playoff debut with the Titans after seven non-winning seasons in Miami. He replaced Marcus Mariota and went 7-3 as a starter to help Tennessee secure a wild-card berth. Tannehill led the NFL with a career-best 117.5 passer rating that is the fourth-highest in a single season among qualified passers in league history. He'll try to beat Tom Brady and the Patriots on the road.

The injury-riddled Eagles won their last four games to clinch the NFC East title. They finished Week 17 with seven injured offensive starters out of the lineup. They used five players they promoted from the practice squad at skill positions. Those five have been cut 18 times in their NFL careers.

Saints quarterback Drew Brees has at least three touchdown passes and zero interceptions in his last four games. He recorded a 74.3 completion percentage, just shy of breaking his record of 74.4 set last season.

Buffalo's Josh Allen (nine) led the league in rushing TDs by a quarterback and Houston's Deshaun Watson (seven) tied for second. Watson joined Steve Young as the only quarterbacks ever with 25-or-more TD passes and five-plus rushing TDs in multiple seasons.

Vikings quarterback Kirk Cousins is the only quarterback with at least 25 TD passes in each of the past five seasons. He'll seek his first postseason win in his second career playoff start when Minnesota visits the Saints.