Tepper says no decision yet on future of QB Cam Newton 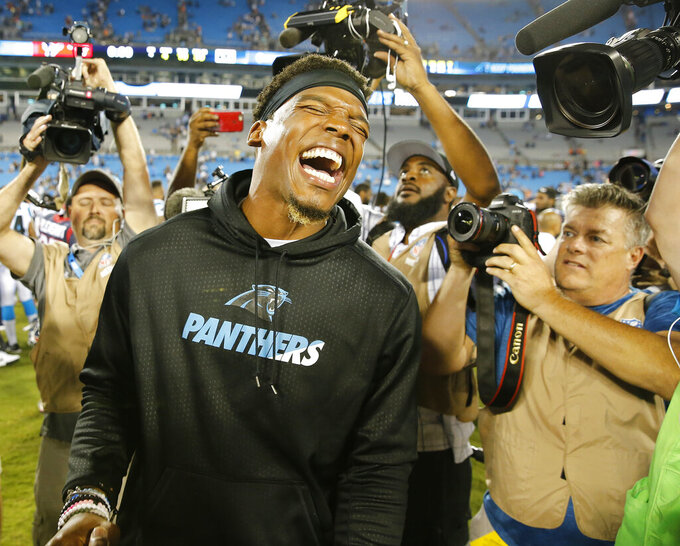 FILE - In this Aug. 9, 2017, file photo, Carolina Panthers quarterback Cam Newton laughs after the second half of an NFL preseason football game against the Houston Texans, in Charlotte, N.C. Cam Newton is a former league MVP and the long-time face of the Panthers franchise. But it's hard not to wonder if his future in Carolina is coming to an end following his recent spate of injuries. (AP Photo/Jason E. Miczek, File)

CHARLOTTE, N.C. (AP) — Cam Newton’s future in Carolina will depend on how well he recovers from a foot injury.

Panthers owner David Tepper said in a meeting with reporters Monday the organization won’t decide on Newton’s long-term future until after they determine if the quarterback has fully healed from a Lisfranc injury in his left foot, one that resulted in him being placed on injured reserve earlier this season.

Tepper said he does not know if Newton plans to have surgery.

Newton, 30, played only two games for the Panthers this season before the team decided to shut him down.

The 2015 league MVP is slated to cost $21.1 million under next year’s salary cap, but the team could save $19 million if they cut him or trade him.

But he said it is impossible to evaluate Newton right now given the uncertainty of his recovery.

Ideally, Tepper said Newton makes a full recovery, remains with the Panthers and leads the organization to a Super Bowl title.

Tepper spoke to reporters Monday on the condition he was not directly quoted, but that everything he said could be attributed to him.

Tepper, who bought the team in 2018, said he is pleased with the development of second-year quarterback Kyle Allen, who is 5-3 as the team’s starting quarterback this season despite his recent struggles with turnovers. Allen has nine interceptions in the past four games, three of which the Panthers have lost.

According to Tepper, the team did not attend the workout for free agent Colin Kaepernick because they aren’t interested in bringing in a veteran quarterback at this time. He likes what the team has now with Allen and rookie Will Grier, the team’s third-round draft pick.

He said bringing in a quarterback right now doesn’t make any sense.

Tepper also addressed several other topics related to the team:

— He reiterated he wants to build a new football stadium within the next five to 10 years in Charlotte with help from city and county funding. The team’s existing stadium is 25 years old.

— He still wants to bring an expansion Major League Soccer franchise team to the city and hopes the league would allow the team to use its current football stadium for games.

— He said the plan is for the team’s new practice facility and headquarters in Rock Hill, South Carolina to be completed by August 2022, in time for that season’s training camp.

— He said the Panthers will make a decision on whether to continue to have training camp at Wofford College by February. The other option would be hosting training camp in Charlotte, where he recently built a practice bubble.