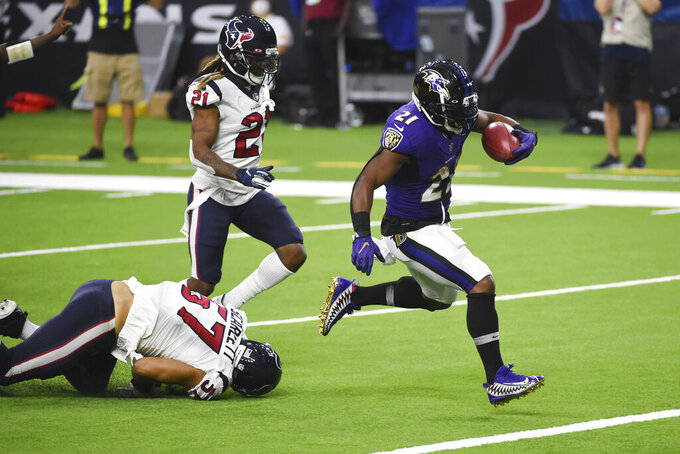 Baltimore Ravens running back Mark Ingram (21) runs for a touchdown against the Houston Texans during the second half of an NFL football game Sunday, Sept. 20, 2020, in Houston. (AP Photo/Eric Christian Smith)

HOUSTON (AP) — The Houston Texans have been terrible against the run to start this season and it has left them in an 0-2 hole with a trip to Pittsburgh looming on Sunday.

Houston allowed the Ravens to rush for 230 yards in a 33-16 loss this weekend after the Chiefs ran for 166 yards in their season-opening victory. The Texans rank 31st in the NFL in yards rushing allowed this season and are searching for ways to turn things around before the season gets away from them.

“We’re not playing very well, we’re not coaching very well, and we’ve got to really get improved here this week in a real hurry,” coach Bill O’Brien said.

The Texans were disappointed that they allowed the Ravens ran all over them in the second half after limiting their potent running game to just 44 yards before halftime. They know that everyone needs to do better to turn things around.

“It’s not necessarily one guy, it’s 11 guys, it takes a village,” defensive tackle Brandon Dunn said. “So, we got to figure out what our mistakes are and fix them and so we can win a game.”

The Texans are also struggling to run the ball and rank 29th in the league in yards rushing a game with 84.5. David Johnson, in his first season with the Texans after being traded from Arizona for DeAndre Hopkins, managed 34 yards rushing on Sunday.

Houston finished with 51 yards rushing in a game in which they played without backup running back Duke Johnson, who sat out with an ankle injury.

Quarterback Deshaun Watson has been solid in the first two games and has 528 yards passing with two touchdowns entering Week 3. The fourth-year player believes he’s done some things well but is looking to do more. He’s disappointed they’ve gotten down early in both games and is focused on changing that against the Steelers.

“We've just got to keep pushing forward and that’s the biggest thing we can do," Watson said. “And that’s what I’m going to do, find ways to continue to get better and keep trusting all my guys that are in that locker room."

The Texans want to improve their turnover differential after losing the ball three times combined in their first two games and not forcing any turnovers.

Their minus-3 turnover differential is tied with Minnesota for second worst in the NFL.

“It’s a massive, massive key to the game,” defensive end J.J. Watt said. “You have to be able to take the ball away and you have to be able to protect the ball on offense. So... we have to get it done and that’s, when we get back to the quarterback making it even more of an emphasis than we already do on stripping it out or getting the picks, catching the ones that come to us or finding ways to create opportunities.”

Watt had his first multi-sack game in almost a year by taking down Lamar Jackson two times on Sunday. It was the 26th multi-sack game of his career, the most in the NFL since 2011. The three-time NFL Defensive Player of the Year also hit Jackson three other times and batted down one of his passes in the fourth quarter. Watt has 98 career sacks, which ranks second in the NFL since 2011.

Rookie defensive tackle Ross Blacklock received an unnecessary roughness penalty late in the fourth quarter and was ejected after officials told O’Brien that he threw a punch. His behavior drew admonishment from Watt, who called it selfish and stupid.

FB Cullen Gillaspia left in the second half to be evaluated for a concussion and didn’t return. O’Brien said Monday that he would know more about his condition later in the week.

0 - WR Will Fuller had zero yards receiving on Sunday after finishing with 112 yards in the opener. He appeared to struggle while running some routes. But O’Brien would not say if he was injured after the game and was cagey about it when questioned again on Monday.

The Texans must limit their mistakes and shore up their run defense if they hope to avoid starting 0-3 for the second time in three years. It will be a big task against the Steelers, who improved to 2-0 with a 26-21 win over the Broncos on Sunday.

“Everybody has got to do a better job,” O’Brien said. “When you’re 0-2 you have to improve in every area.”