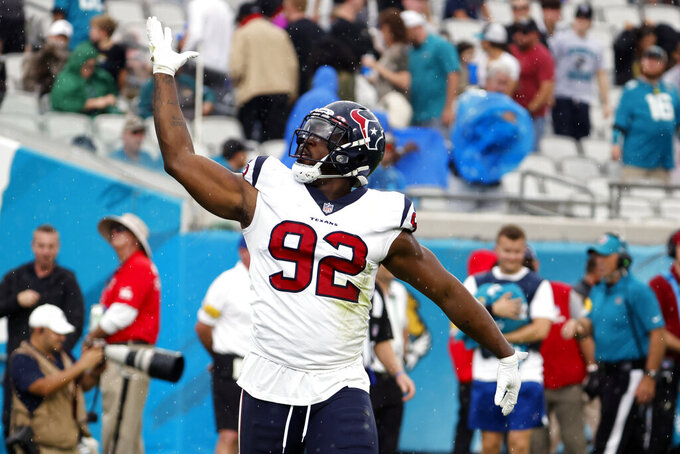 Houston Texans linebacker Chris Smith (92) celebrates after making a play against the Jacksonville Jaguars during the first half of an NFL football game, Sunday, Dec. 19, 2021, in Jacksonville, Fla. (AP Photo/Stephen B. Morton) 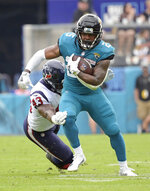 Smith returned a kickoff 98 yards for a touchdown, ending the longest drought in the NFL, and the undermanned Houston Texans beat woeful Jacksonville 30-16 on Sunday to end a three-game skid and extend their dominance in the series.

Smith somehow escaped five defenders near the 30-yard line – Jaguars safety Rayshawn Jenkins broke his right ankle trying to make the tackle — before coasting the rest of the way. It was Houston’s first kickoff return for a score since Oct. 4, 2009, and it helped Smith end haunting memories of getting tackled at the 3-yard line as a rookie with Kansas City in 2018.

“Everybody still brings it up," he said. "I think it’s done for right now. I think they can leave it in the past.”

Texans rookie quarterback Davis Mills won for the first time in eight starts. He connected with Brandin Cooks twice for touchdowns, once early and again late. The second one was a 43-yarder that sealed yet another Houston victory against Jacksonville.

“That was the dagger,” Mills said.

The Texans (3-11) won their eighth straight against the Jaguars (2-12) and swept the AFC South series for the ninth time in the last 11 years. Houston won despite playing without seven starters, including five defenders.

The Jags, playing their first game since firing coach Urban Meyer, dropped their sixth consecutive game and 10th straight in AFC South play. Thanks to Detroit's victory, the Jaguars now are in line to have the No. 1 draft pick for the second straight year.

Especially on special teams, where mistakes and missed tackles led to 17 points. Smith's return was the highlight.

“It was the perfect kick. It was just like we practiced it all week,” Smith said. “I definitely owe them all something. I haven’t came up with it yet. But I’m going to get them something nice for just setting that up for me. I couldn’t do it without my blockers.”

The Jaguars refused to blame their latest lackluster performance on a tumultuous week that included firing Meyer early Thursday to end one of the worst coaching tenures in NFL history.

Jacksonville had three special teams breakdowns, five dropped passes and two chances in the fourth quarter in a one-score game.

“It’s definitely frustrating,” Jaguars quarterback Trevor Lawrence said. “All the guys are frustrated. We want to be more consistent. We want to win. ... We all have to play better. That’s the thing: You've just got to look yourself in the mirror and figure out how to get better, and I think we’ll do that, but got to really do that this week.”

Cooks continued his success against Jacksonville. He finished with seven receptions for 102 yards and two scores and improved to 6-0 against the Jags, getting wins with New Orleans, New England and Houston. He now has five 100-yard games in those six outings.

He has 34 catches for 701 yards and five touchdowns against Jacksonville.

A fan wearing a No. 16 Jaguars jersey and a blond wig ran into the end zone just before James Robinson scored from 1 yard early in the second quarter. The fan was jumping up and down – he was indeed wide open – when the real No. 16, quarterback Trevor Lawrence, snapped the ball and handed it to Robinson.

The fan was quickly met by security, taken into a tunnel and later arrested for trespassing.

Jenkins was placed in an air cast and carted off the field in the first quarter. His season is likely done. … Jaguars left tackle Cam Robinson (neck) left in the second half and was replaced by rookie Walker Little.

Jaguars: play at the New York Jets next Sunday. It’s a matchup of the top two picks in the 2021 NFL draft: Lawrence and Jets quarterback Zach Wilson.