Texans, Jaguars try to end skids in meeting without Meyer 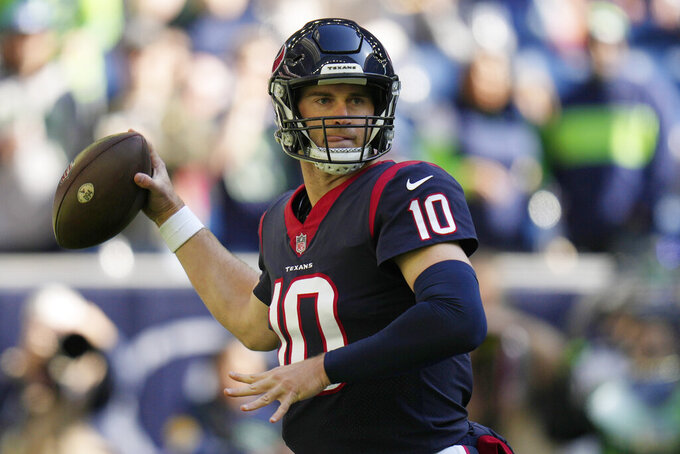 Houston Texans quarterback Davis Mills (10) looks to pass against the Seattle Seahawks during the first half of an NFL football game, Sunday, Dec. 12, 2021, in Houston. (AP Photo/Eric Christian Smith) 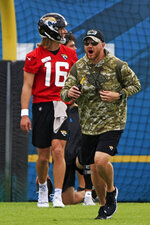 Ward and his teammates have a chance to show whether Meyer’s sudden dismissal three days before a game will pull them together or tear them apart.

The skidding Jaguars (2-11) host reeling AFC South rival Houston (2-11) in a matchup that has more bearing on next season than this one. The winner gets some much-needed momentum down the stretch while the loser will have the inside track to the No. 2 pick in next April’s draft.

Jacksonville has lost five consecutive games, the longest current skid in the NFL, and has dropped seven in a row and 13 of 15 in the series. The Jags also have lost nine straight in the division. Ending those streaks would normally have been a primary topic during the week. Instead, the spotlight was on Meyer — once again.

The three-time national championship-winning coach was under the microscope following another week of dysfunction that included accusations he kicked a player during practice in August, had a heated argument with a receiver and called his assistants losers. Those were the latest and last missteps for Meyer, who failed miserably to make a smooth transition to the NFL.

“It’s really just full steam ahead on football,” Bevell said. “There’s not going to be these side conversations or anything just like, ‘Hey, what’d you think?’ I mean, we’re going and that’s what the cool thing is about these guys: They come to work ready to go. At some point when you need to reflect, there’s probably a chance to reflect, but right now it’s all eyes on the Houston Texans.”

The Texans have to think this is their chance to end a three-game slide in which they’ve scored just 27 points.

Rookie quarterback Davis Mills will make his eighth start and is coming off throwing for a career-high 331 yards. Mills completed his first 14 passes to set a franchise record last week against Seattle but faded in the second half of a 33-13 loss.

“Just finding ways to get the ball in the end zone, scoring a lot more points,” he said. “In certain scenarios, it’s tough where you kind of get stuck in passing scenarios where the defense knows what you need to do.”

Houston ranks last in the NFL in rushing, averaging 77.5 yards a game, and will be without Rex Burkhead (hip). That leaves David Johnson and Royce Freeman to try and get the ground game going. The Texans managed 63 yards rushing last week with Johnson on the reserve/COVID-19 list and Burkhead sitting out most of the second half with the injury.

The Texans had a season-high 160 yards rushing in a season-opening win over the Jaguars, but that was led by Mark Ingram, who is now in New Orleans.

Bevell will move from the coaching booth to the sideline to call plays. He’s been upstairs all season. It could give him a different perspective on rookie quarterback Trevor Lawrence, who is coming off a four-interception performance at Tennessee.

“That’s what I’m familiar with,” Bevell said. “The last however many years, that’s what I’ve been doing. There is something about being down there — the energy, the juice. Being able to look them in the eye, how they’re doing and some of the other communications that you’d have, I’m excited about.”

“It’s just later in the week than it normally would be so we’re going to do status quo,” Bevell said. “We’re going to keep everything the same this week and then over the weekend we’ll mull over some things and probably have some conversations.”

Jaguars running back James Robinson has been bottled up most of the season and was benched twice in the last three weeks under Meyer. He might get a chance to shine against the Texans, who rank last in the NFL in run defense. Houston is giving up nearly 150 yards a game on the ground.

“James Robinson is our starting running back and he will be played as such,” Bevell said enthusiastically.