Texans look to build on momentum after big win over Patriots 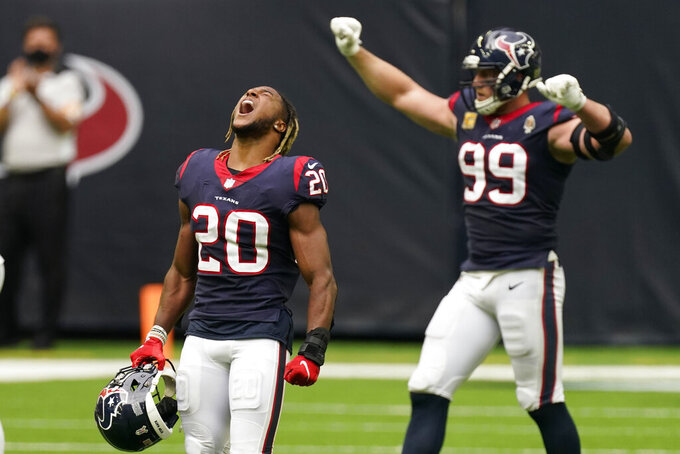 HOUSTON (AP) — The Houston Texans played their most complete game of the season on Sunday to beat the New England Patriots 27-20.

Quarterback Deshaun Watson made plays with his arms and his legs and J.J. Watt was a force on defense to help the Texans to their first win against a team other than struggling division rival Jacksonville.

Now the Texans (3-7) will have to move on quickly with a game at Detroit on Thanksgiving.

“This is of course a big win, but we’ve just got to continue to keep pushing forward and enjoy this one for the next however many hours,” Watson said. “But (Monday) when we wake up, we’ve got to get ready for Detroit because it’s a short week on the road and we’ve got to go up there and try to get another one.”

Watson threw for 344 yards for his fifth 300-yard passing game this season. He led the team with 36 yards rushing and had a scoring run. Watson added two touchdown passes to give him 11 TD passes with no interceptions in his past five games.

“He’s a really good player and he helps make our offense go,” interim coach Romeo Crennel said. “Sometimes when you’ve got a guy like that who can make the plays that he can make, sometimes you don’t have to have a ground game.”

It was a much-needed performance that helped boost a defense which has struggled all season.

“It’s no secret that our defense hasn’t been playing at the level that we expect to play at or that we want to play at, so we’re obviously trying to, every single week, trying to turn that around,” Watt said. “I think (Sunday) was a good step to doing that, and now we have a short week to come back on Thursday and we have a chance to take another step in doing that.”

The Texans were able to limit New England’s potent running game to 86 yards after they had struggled against the run all season and had given up 346 yards rushing combined in their previous two games. Crennel was encouraged by the improvement on Sunday and said it came from the players being more consistent.

“Consistency of technique and guys doing their job and doing their job first and then trying to help out,” he said. “A lot of times it comes to toughness and leverage, playing against double teams and not guessing.”

Houston’s running game remains one of the team’s biggest weaknesses. The Texans had just 55 yards rushing against New England and only 19 of those yards came from Houston’s running backs with Watson’s scrambling accounting for the rest of the yards.

WR Keke Coutee entered Sunday having appeared in just one game this season and not playing since fumbling in that game on Sept. 20. On Sunday, the third-year player got another chance when two receivers were injured, and he had his first touchdown catch since his rookie season.

“Keke got an opportunity, he took advantage of it and now he'll try to hold onto it," Crennel said.

RB Duke Johnson continued to struggle in his second start with David Johnson out indefinitely after sustaining a concussion on Nov. 8. Duke Johnson had just 15 yards rushing on 10 carries.

WR Randall Cobb has an injured foot. ... WR Kenny Stills has an injured leg. ... LT Laremy Tunsil missed Sunday’s game because of an undisclosed illness that the team said wasn’t COVID-19 related and Crennel said he wasn’t sure if he would return on Thursday.

170 — Long snapper Jon Weeks set the franchise record for most games played by appearing in his 170th game on Sunday. Weeks, who has been with the team since 2010, passed retired receiver Andre Johnson, who played in 169 games for Houston from 2003-14.

The Texans will try to build on the momentum from Sunday’s victory as they attempt to win consecutive games for the first time this season when they meet a Detroit team that has lost three of four and was shut out by the Panthers on Sunday. It could be a chance for another big game from Watson as the Lions rank 25th in the NFL by allowing 258.4 yards passing a game.