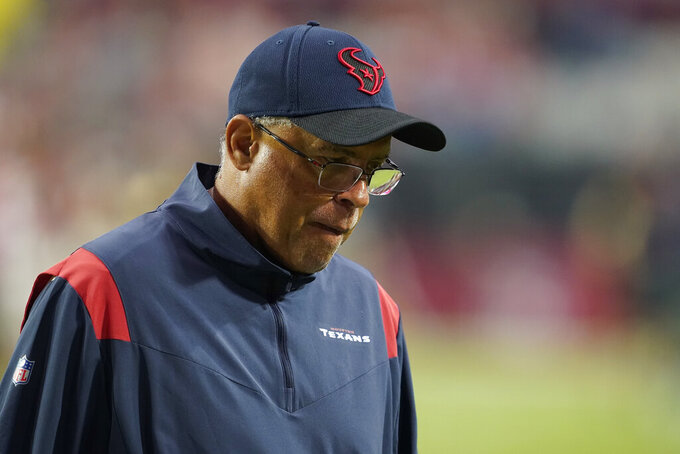 GLENDALE, Ariz. (AP) — Houston had Kyler Murray holding his head after big hits, shaking it after tripping him up several times.

The Cardinals' crafty quarterback kept getting up and getting away, leaving Texans flailing in his wake.

Unable to contain Murray or generate anything on offense, the Texans stretched their losing streak to six games with an ugly 31-5 loss to the Arizona Cardinals on Sunday.

“It's like chasing a rabbit, pretty much,” Texans defensive end Jonathan Greenard said. “That dude’s change of direction is crazy and he still can throw a dot. Like playing a video game.”

Houston (1-6) had Murray's number — and his helmet — early on Sunday, looking as if it might be able to knock off the NFL's last undefeated team as huge underdogs.

The Texans shut down Arizona's first drive and had a safety on the second when defensive end Jacob Martin tackled Murray by the back of the helmet — no flag was thrown — in the end zone. Murray was slow to get up and got checked out in the medical tent before returning the next series.

Murray took a shot to the head in the first quarter and was frustrated a couple of times when Houston tripped him up from behind. He wobbled again late in the first half when Martin buried him on a sack.

Unfortunately for Houston, Martin was called for roughing the passer on the play, setting up Matt Prater's 31-yard field goal on the last play of the half.

Murray spent the rest of the afternoon darting and dancing in the desert, extending plays with his legs, picking the Texans apart with his arm.

He found DeAndre Hopkins on a 1-yard TD pass and threw on the run after scrambling and connected on a 5-yard scoring pass to Christian Kirk in the second quarter. He also hooked up with new tight end Zach Ertz on a 47-yard TD in the third quarter and led Arizona down the field to set up James Conner's 18-yard run that made it 31-5 in the fourth.

Murray finished with 261 yards on 20 of 28 passing and the Cardinals scored 31 straight points to complete their first 7-0 start since 1974.

“They came out and played hard, got after us,” Murray said. “They took some shots today.”

Houston had even more of a problem on offense.

The Texans used good field position to set up Ka'imi Fairbairn's 53-yard field goal late in the first quarter to take a 5-0 lead. They couldn't get much going after that, appearing to be stuck in the desert sand much of the afternoon.

Houston finished with 160 yards — 42 on 15 carries rushing after falling behind — and failed to score a touchdown for the third time in four games.

Rookie quarterback Davis Mills, who said he had been improving through the first four games as a starter, could not hit anything downfield, finishing with 135 yards on 23 of 32 passing. He also lost a fumble.

“There is a process we are going through,” Texans coach David Culley said. “We don’t like where we are right now. We watch the video and look at things and see what is happening that is putting us in this situation. As coaches, we’ve got to make sure we correct those.”

At least they don't have to face Murray again. No more chasing rabbits.