Texans not scheduled to pick until third round of draft 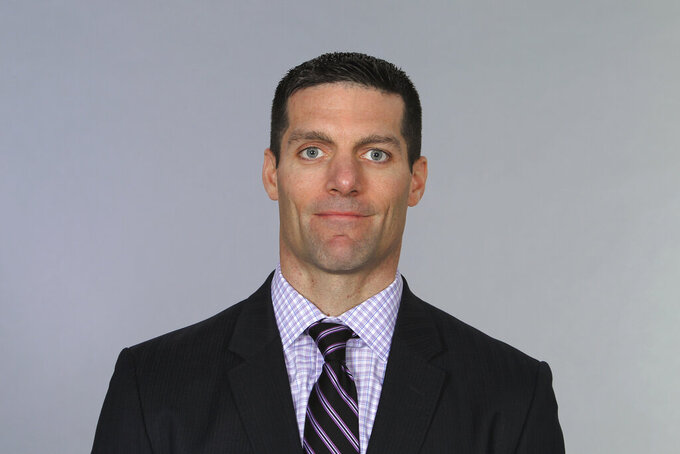 FILE - In this 2014 file photo, Nick Caserio, of the New England Patriots NFL football team, poses in Foxborough, Mass. Caserio enters his first draft as the general manager of the Houston Texans with the unique challenge of trying to improve a team that went 4-12 last season without the benefit of a first- or second-round pick. (AP Photo/File)

HOUSTON (AP) — Nick Caserio enters his first draft as the general manager of the Houston Texans with the unique challenge of trying to improve a team that went 4-12 last season without the benefit of a first- or second-round pick.

The Texans’ first pick in the draft isn’t until the third round at 67 overall after they traded away their picks in the first and second rounds for this season in the 2019 deal with Miami that brought left tackle Laremy Tunsil to Houston.

Caserio is a general manager for the first time after being hired by the Texans in January following almost two decades as an executive with the New England Patriots. He took over for Bill O’Brien, who was the team’s coach and general manager until he was fired following last year’s 0-4 start. David Culley was hired to be the team’s new coach.

Without a pick in the first two rounds, Caserio looked to improve the team through free agency. He was very active this season, signing 19 players led by running backs Mark Ingram and Phillip Lindsay and quarterback Tyrod Taylor.

Houston has eight picks in this year’s draft. Along with the third-round pick, the Texans have one in the fourth, two in the fifth, three sixth-round picks and one in the seventh round.

Considering that they don’t have any high draft picks this year, it would be difficult for them to trade back into the first two rounds, but Caserio and his staff will be open to all options on draft night.

“Preparation is to look at different scenarios, how far could we actually move relative to the resources that we currently have in place,” he said. “So the most important thing is always being prepared to pick whenever you’re scheduled to pick, and if there’s an opportunity to move up or down, we’ll be flexible, we’ll be open-minded and we’ll just try to make best use of the resources that we have.”

The Texans enter the draft with uncertainty at quarterback after 22 women have filed lawsuits since March 16 alleging that they were sexually assaulted or harassed by Deshaun Watson. Houston police and the NFL have said they are investigating the allegations, leaving his future with the team up in the air.

Watson’s future in Houston was already in question before his legal issues after he became unhappy with the direction of the team and requested a trade early this year. Caserio wouldn’t comment on the possibility of Watson being traded, but it would seem unlikely that he could be moved while his legal issues are pending.

A decade after the Texans picked J.J. Watt with the 11th overall pick in the 2011 draft, Houston could be looking to add a defensive end in this draft now that he’s in Arizona. Watt asked for and was granted his release in February before joining fellow former Texan DeAndre Hopkins with the Cardinals.

The departure of the three-time NFL Defensive Player of the Year and franchise leader in sacks leaves a huge hole in Houston’s defense. It will be difficult for the Texans to find a starter at the position in the third round or later. But they could add some depth with a late-round pick that they could develop while new acquisitions Shaq Lawson or DeMarcus Walker move into Watt’s spot.

The signing of Taylor gives the Texans an insurance policy at quarterback if Watson can’t or won’t play for them next season. Taylor signed a one-year deal with Houston after spending the past two seasons with the Chargers. He backed up Philip Rivers in his first year with the team before moving into the starting role last season.

He only started one game before being sidelined when a team doctor accidentally punctured his lung when giving a painkilling injection for a rib injury. By the time he recovered he had lost his starting job to Justin Herbert, who was the AP Offensive Rookie of the Year.

“What we try to do at all positions with the entire team is try to identify players that we ... liked that may have had some experience with our staff and that were looking for an opportunity to compete, to be in a good situation and that wanted to be in Houston,” Caserio said. “He certainly fell into that category.”