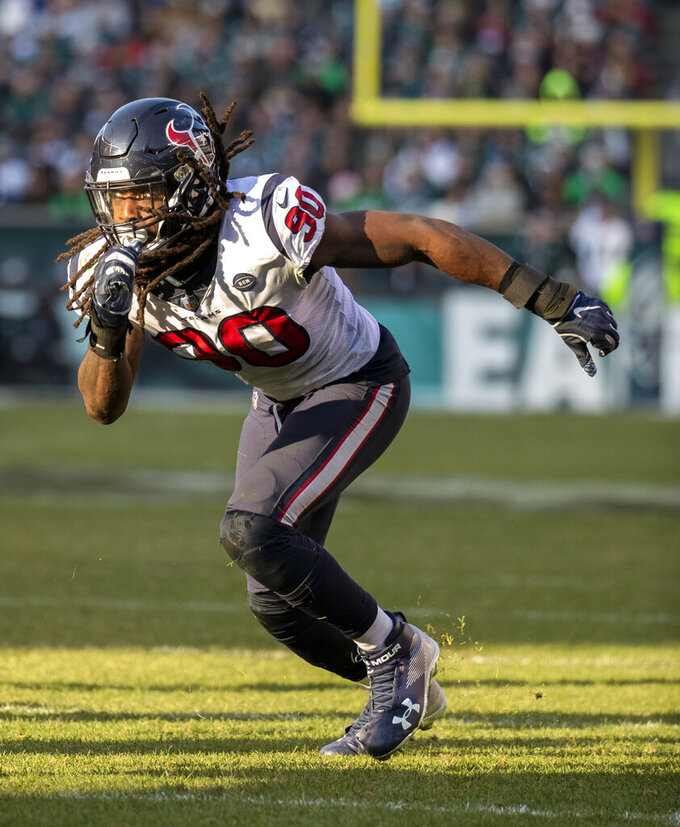 The move doesn't close the door for the Texans to sign the edge rusher to a long-term deal. General manager Brian Gaine says: "Our goal is to continue to work with his representation on a long-term contract. This gives us both an opportunity to continue to do so."

Houston will offer Clowney, the first overall pick in the 2014 draft, a one-year guaranteed contract for an amount based on position. Because Houston used the non-exclusive tag on Clowney, he can sign immediately or attempt to get an offer sheet from another team. If he is given an offer sheet, the Texans would have the chance to match it.

In that scenario, if the Texans did not match the offer, the new team would have to give up two first-round picks as compensation for taking the franchise player.

Clowney has said repeatedly he'd like to remain a Texan and after Houston lost 21-7 to the Colts in the wild-card round in January he reiterated that sentiment.

Coach Bill O'Brien wouldn't speculate on Clowney's future last week at the NFL combine, but he did talk about his time coaching him.

"I've had a really good experience with JD," O'Brien said. "He's played good football for us. He's a good person. I've enjoyed coaching him ... I'll leave (contract discussions) to Brian ... but I have nothing but good things to say about JD."

After missing all but four games as a rookie because of a knee injury, Clowney has steadily improved each year and developed into one of the top defenders in the league, making the Pro Bowl in each of the last three seasons.

The 26-year-old played 13 games and had 4 1/2 sacks in his second season, but some still questioned if he could replicate the success he had in college in the NFL.

He started to quiet the doubters in 2016 when he started 14 games and had 52 tackles, six sacks and forced a fumble. But it wasn't until 2017 when he took his game to the next level. The 6-foot-5, 265-pound Clowney had 59 tackles and 9 1/2 sacks, forced two fumbles and recovered three, including one for his first NFL touchdown.

Clowney built on that success last season when J.J. Watt returned after missing most of the previous two seasons with injuries. The two became one of the most fearsome pass rushing duos in the league. Clowney finished with 47 tackles, nine sacks, a forced fumbles and three fumble recoveries, with one for another touchdown.