Texans rested and ready to start playoffs against Bills 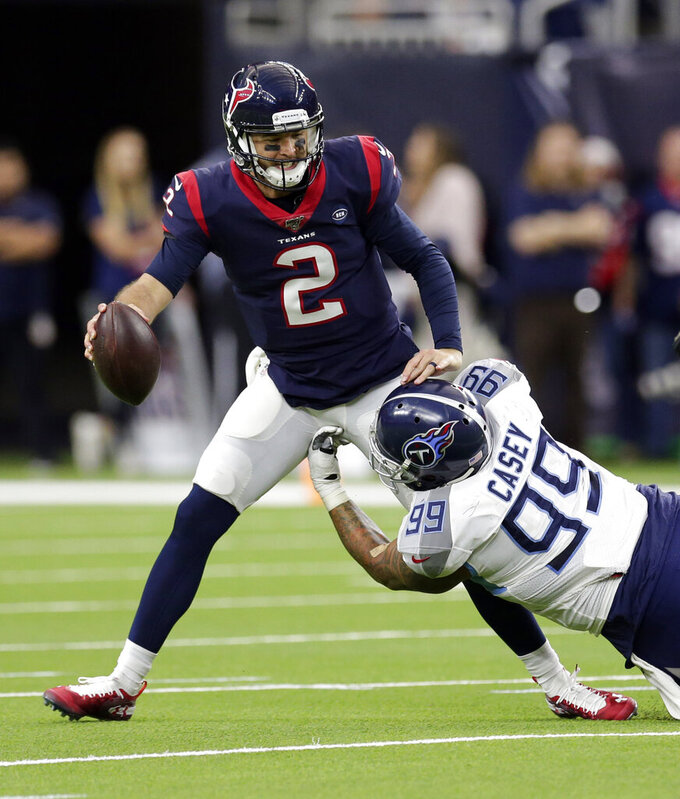 HOUSTON (AP) — The Houston Texans got a bit of a break this weekend before Saturday's playoff game against the Buffalo Bills as several key starters rested against Tennessee with the team's playoff spot already secured.

After winning the AFC South in Week 16, Houston lost to the Titans 35-14 on Sunday in a game where Tennessee clinched a playoff berth.

Quarterback Deshaun Watson was active on Sunday, but coach Bill O'Brien started AJ McCarron instead. Watson was listed as questionable with a back injury this week but said he was OK. Receiver DeAndre Hopkins (illness) was also active, but did not play and several starters, including receiver Kenny Stills (knee), left tackle Laremy Tunsil (ankle) and nose tackle D.J. Reader, were inactive.

O'Brien said deciding to rest players on Sunday wasn't an easy decision, but he decided to do it after the earlier games were finished and he knew the Texans were locked into the No. 4 seed.

"Hopefully it's valuable, but it was a tough situation because there were guys that wanted to play," he said. "We always try to make decisions in the best interest of the team and once we saw what was going on with the earlier games we basically knew where we were and we wanted to give other guys an opportunity to play."

The Texans won the AFC South title for the second straight year and the fourth time in five seasons. The Colts beat Houston 21-7 in the first round last season.

O'Brien said he doesn't think what happened in that game has any bearing on Saturday's playoff game.

"We're a much different team," he said. "Anytime you play in a game like that obviously that's part of our memory but at the end of the day this is a very different team, a whole different year."

O'Brien was then asked if this is the best team he's had.

With so many people resting on Sunday it was tough to get a gauge of where the Texans are as they enter the playoffs. But O'Brien said on Monday that his team is about as healthy as any team can be at this time of year, which is a good sign to start the postseason.

The Texans have given up some long runs in the past two games, including a 53-yard touchdown dash by Derrick Henry on Sunday in a game where he finished with a season-high 211 yards rushing.

"We have to do a better job of setting the edge and building a wall tackling," O'Brien said. "That's going to be a big point of emphasis this week. We've got to be able to do that. We've done a good job of that at times throughout the year, most of the time, but over the last few games, it's been inconsistent."

DeAndre Carter had six catches for a career-high 65 yards against the Titans with many of Houston's receivers sitting out. Carter could give the Texans another option in the postseason as Watson looks to spread the ball around.

LB Brennan Scarlett had two penalties on Sunday, including a 15-yarder for a horse collar tackle. The starter will need to avoid such errors against the Bills.

WR Will Fuller sat out on Sunday with a hamstring injury after he was hurt in Week 16. O'Brien said he's progressing, but that it was too early to say if he'll play on Saturday. O'Brien added that he wasn't sure when they'll activate DE J.J. Watt to the active roster. The three-time Defensive Player of the Year returned to practice last week after sitting out since October after tearing a pectoral muscle.

1 — The Texans have won just one of three playoff games under O'Brien.

After getting a week to rest and recover, Watson will need to limit his mistakes and help the Texans move the ball consistently against the Bills. It's unclear how much Watt will be able to play on Saturday, but his return will be a boost to a team which has had trouble pressuring quarterbacks this season.