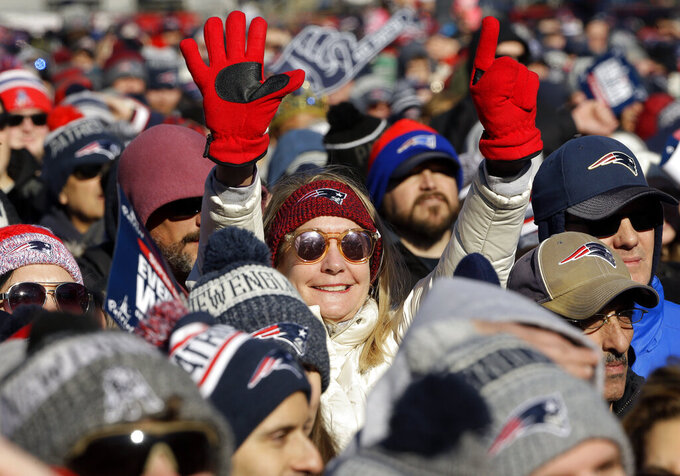 A New England Patriots fan gestures during an NFL football Super Bowl send-off rally for the team, Sunday, Jan. 27, 2019, in Foxborough, Mass. The Los Angeles Rams are to play the Patriots in Super Bowl 53 on Feb. 3, in Atlanta, Ga. (AP Photo/Steven Senne)

Break out the "Super Bowl Bound" banner. Queue up the highlight video. Take a few shots at those loser cities that don't have annual championship pep rallies. And round up the usual suspects: owner Robert Kraft, coach Bill Belichick, quarterback Tom Brady and the rest of the team captains.

"We're not at the end yet," Brady told a sea of fans that covered the entire field at Gillette Stadium and filled most of one side of the lower seating bowl. "We've got one more to go."

The five-time Super Bowl champion then led the crowd in a chant of "We're still here!" before tossing the microphone aside to more cheers, and the Patriots headed off for buses that will start them on their way to Atlanta. They'll play the Los Angeles Rams on Sunday seeking their sixth NFL title since the 2001 season.

A host wearing a sweatshirt reading "New England vs. Everyone" set the tone, taking shots at the previous playoff opponents, Kansas City and the Los Angeles Chargers. Looking out at the crowd, which the team estimated at 35,000, he said, "The Chargers consider this a sellout."

"This is the biggest send-off we've ever had," Belichick said.

Brady jerseys were everywhere, and many fans held up signs that were distributed saying that the GOAT — Greatest Of All Time — is better than a Ram. Center David Andrews, who grew up near Atlanta, went to Georgia and wore a Braves cap to the rally, told the crowd, "Can't wait to see y'all there (and) show them what a real fan base is."

Defensive Back Patrick Chung took a video with the crowd chanting "Beat LA!" in the background. Special teams captain Matthew Slater, whose father played 20 years for the Rams and is a member of the team's Hall of Fame, said he grew up rooting for the team he will face when he tries for his third Super Bowl victory.

"But on Sunday, I don't know nothing about no Rams," he said.