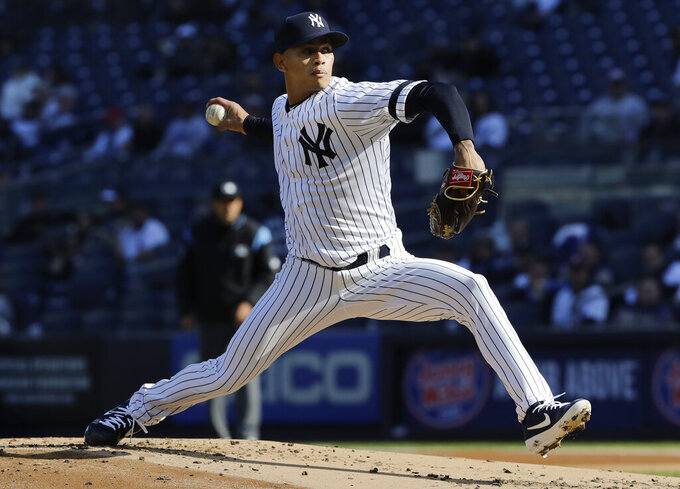 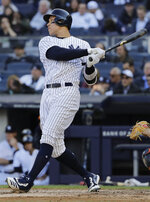 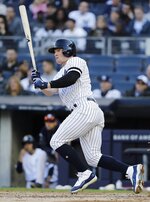 Even when New York connected, the damage mostly blew back in the wrong direction.

Boyd junk-balled through afternoon shadows for a career-high 13 strikeouts, Gordon Beckham hit a tiebreaking solo homer in the eighth inning and the Detroit Tigers beat the hobbled Yankees 2-1 on Wednesday.

The Yankees struck out 18 times overall, a team record for a nine-inning game. Many of those came on breaking pitches against Boyd , a left-hander who became the first Tigers pitcher to open a season with consecutive double-digit strikeout games since at least 1908.

"He had all of his stuff going," Detroit manager Ron Gardenhire said. "His fastball going, his slider and everything.

"It's not about just the shadows, but that made it tough for everybody. You use it. You use what you can as a pitcher."

A year after winning 100 games, New York has opened by dropping two of three to both the Baltimore Orioles and Tigers, teams that combined for 213 losses last season. New York already has 10 players on the injured list and expects to soon add another — shortstop Troy Tulowitzki was pulled with a strained left calf, apparently injured hitting a popup in the second inning.

Beckham connected off reliever Chad Green (0-1), his first homer since Aug. 28, 2016, while with the Atlanta Braves. It was Detroit's third and final hit of the game.

Beckham almost didn't make the club out of spring training.

"It's been awesome," Beckham said. "These guys are a lot of fun to play with."

Shane Greene got his fourth save with a perfect ninth, completing Detroit's five-hitter.

Boyd (1-1) baffled the Yankees with an offspeed-heavy arsenal. He went to his slider often, getting 13 swinging strikes while throwing the pitch 41 times. Just 45 of his 98 pitches were fastballs. He walked three and allowed five hits in 6 1/3 innings.

"It was good today," Boyd said. "The main point was to find out what works on a given day and just attack with that."

Yankees hitters have 65 punchouts through six games, a franchise first.

"Sometimes that breaking ball, that can be a tough pitch when you're dealing with shadows," manager Aaron Boone said. "Makes it a little trickier."

"I wasn't hitting but I can tell you how hard it was to see the ball from both teams," Gardenhire said. "The ball, the spin, the whole package with that shadow. That's a nightmare."

Boyd's strikeouts were the most by a visiting pitcher against the Yankees since San Francisco's Jason Schmidt fanned 13 in 2002 at the previous version of Yankee Stadium.

Tulowitzki left prior to the fourth inning and further testing revealed a low-grade strain. The five-time All-Star popped up in his only at-bat in the second inning, and then told backup Tyler Wade to get loose, although Tulowitzki showed no other signs of injury even to teammates. Tulowitzki played one more inning in the field before leaving. Gleyber Torres moved to shortstop and Wade entered at second.

Signed as a free agent to fill in for injured Didi Gregorius, Tulowitzki is hitting .182 in five games. Boone says Tulowitzki is "almost certainly" headed to the injured list.

A week into the season, the Yankees lead the majors in players on the IL. That includes eight players who combined for 26.5 wins above replacement (WAR) for New York last season, more than half of their 56 total, per Fangraphs.

Yankees slugger Aaron Judge was called out after being struck by Torres' hard grounder running between second and third base during the third inning, ending what proved to be New York's best threat.

"I get hit in the foot and that kills the momentum," Judge said. "We lost it right there."

Boone isn't worried about the Yankees bouncing back from a 2-4 homestand.

"Very easy," Boone said. "Because we're a resilient group. We'll get on that plane and go get after it."

Jonathan Loaisiga allowed a run over four innings of one-hit ball in his 2019 debut for New York. The rookie right-hander was sharp early, ending the first inning by freezing two-time AL MVP Miguel Cabrera with a 98 mph fastball on the outside corner. He struggled through the fourth, walking three and allowing a sacrifice fly to Christin Stewart.

Yankees leadoff man DJ LeMahieu doubled and Judge drove him in with a single in the third.

Yankees: Slugger Luke Voit wore extra padding on his left hand a day after being hit there by a pitch. X-rays were negative, and Voit said the bruising wouldn't limit him. ... LHP CC Sabathia was reinstated from the suspended list and moved to the 10-day injured list. Boone hops Sabathia will rejoin the rotation during a homestand beginning April 12.

Yankees: LHP James Paxton (0-1, 1.59) pitches against the Orioles at Baltimore's home opener. RHP Alex Cobb will make his first start of the season for the O's after opening the season on the IL.