"Time to be an athlete." Flexibility key for Steeler rookies 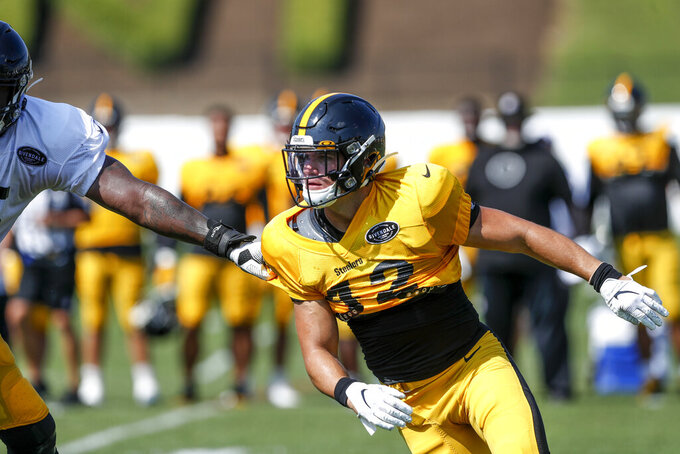 FILE - This Aug. 1, 2019, file photo shows Pittsburgh Steelers linebacker Sutton Smith (42) as he tries to evade offensive tackle Jerald Hawkins during practice at their NFL football training camp in Latrobe, Pa. Smith is learning how to play linebacker and fullback while Zach Gentry figured he'd be an NFL quarterback, not a tight end. Justin Layne began his college career as a wide receiver, not a cornerback. All three offer proof of Pittsburgh's emphasis in finding adaptable young players who can do a little bit of everything. (AP Photo/Keith Srakocic, File) 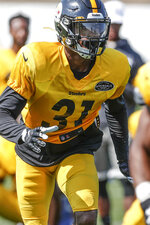 LATROBE, Pa. (AP) — The message couldn't have been clearer when the Pittsburgh Steelers called Sutton Smith on the final day of the NFL draft.

Yes, the Steelers liked Smith's production at defensive end at Northern Illinois. His 15 sacks as a senior were kind of hard to miss, particularly for a 6-foot, 233-pound guy who doesn't exactly fit the physical profile of an elite pass rusher.

None of it mattered, however, once the Steelers took a flyer on Smith in the sixth round. Asked what he remembers about his first conversation with the coaching staff, Smith laughed.

"'Time to be an athlete,'" Smith said with a laugh.

They weren't kidding. The star high school running back who scored 32 touchdowns as a senior before transitioning to a defensive end in college is getting a crash course at outside linebacker and fullback in the NFL, often in the same practice.

"It's a slow work in progress right now," Smith said. "Just trying to figure out the kinks and do what's best for me and the organization right now."

Smith is up for whatever, which is a good thing because there's a decent chance head coach Mike Tomlin might ask Smith to do. The 23-year-old is among a handful of rookies who arrived at their first training camp being asked to do a job far different than the one they were recruited to do in college.

"Young guys with versatility, young guys that are capable to do multiple jobs is an asset," Tomlin said.

Third-round pick Justin Layne signed with Michigan State as a highly coveted wide receiver prospect. Now he's a defensive back. Fifth-round selection Zach Gentry was the first splashy signing for Jim Harbaugh at Michigan, a big-armed quarterback who figured if he ever reached the pros, he'd do it heaving passes to the end zone. Instead, he evolved into a 6-foot-8 tight end long on athleticism if admittedly a little short in the finer points of run blocking.

"It's a little surreal," Gentry said.

Not that Gentry is complaining. At least, not now anyway. That wasn't exactly the case during Gentry's freshman year. He remembers rolling out on a bootleg shortly after joining the Wolverines and juking a defender, maybe a little too well. Harbaugh asked Gentry to play scout team wide receiver to mimic a player from BYU, Michigan's next opponent. When he excelled at that too, Harbaugh approached Gentry and asked him if he'd consider switching positions.

"I was upset," Gentry said. "I was really upset. I tried to transfer. Coach Harbaugh kind of sat me down a handful of times and explained that if I stick it out, do his regiment and do what I'm supposed to do, I'd go to the NFL as a tight end. I didn't want to believe him because I wanted to play quarterback. But I believe in him and his record with tight ends. I just stuck it out and luckily everything happened the way it did."

That perseverance is one of the reasons Gentry found himself stretching to make a leaping grab at the goal line at Saint Vincent College on Thursday. His fingertip catch drew a nod of approval from Tomlin and a roar from the crowd nestled in the shade behind the end zone.

OK, so it's not as glamorous as quarterback. But it'll do. Gentry admits he can still "sling it around" and yeah, there's a part of him that wouldn't mind standing next to starting quarterback Ben Roethlisberger to see just how he measures up.

"He'd probably school me there," Gentry said. "I haven't been working like that."

Not that an extensive work history is required to get a look at a position. Smith never played a down of fullback in his life until the Steelers started having him moonlight at the position during organized team activities. Smith knows the odds of earning a fullback job over starter Roosevelt Nix — himself a former college defensive lineman — are slim. He also knows nothing is guaranteed for players taken with the 175th overall pick.

If he wants to carve out a spot on an NFL roster, be it in Pittsburgh or elsewhere, he can't get picky about where he lines up. Besides, proving himself is half the fun.

"I'm not going to really have anybody tell me that I can't do something," Smith said. "That's just not who I am and that's not my mentality in this sport. I want to show I can do anything."