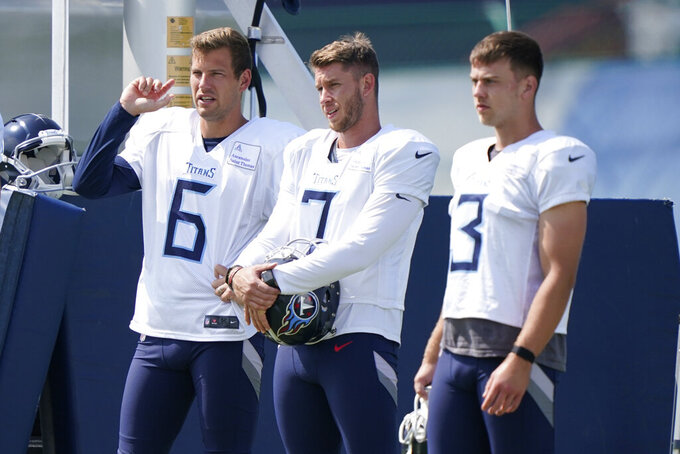 NASHVILLE, Tenn. (AP) — Mike Vrabel insists signing Stephen Gostkowski is all about what the three-time Super Bowl champ can do for the Titans this season, not about the kicker's New England ties to the Tennessee coach and general manager.

Vrabel was a teammate of Gostkowski for the kicker's first three seasons in New England, while Titans general manager Jon Robinson worked in the Patriots' scouting department. Vrabel stressed that a reunion was not the reason for changing out kickers.

“I think that a lot is going to be made about the our history with Stephen," Vrabel said Thursday. "But in the end, that doesn’t really mean anything. It’s a decision that we thought as a team would help solidify the position.”

The Titans made the switch Thursday, agreeing to terms with the four-time Pro Bowler Gostkowski and waiving Greg Joseph. Gostkowski was not at practice later Thursday as he works through the COVID-19 testing protocol.

Tennessee signed a kicker who won three Super Bowls in his 14 seasons with the Patriots. He has made 87.4% or 374 of 428 of his kicks in his career. His field goal percentage ranks fifth-best in NFL history.

Having a healthy and successful kicker on the roster before the start of the season is a lesson the Titans learned only too well a year ago. They thought they would have veteran Ryan Succop ready for the season opener after offseason surgery on his knee only to have to sign a replacement Sept. 4.

That was the start of a dreadful season for Tennessee's kicking game as the Titans wound up with the NFL's worst field goal unit as their first four kickers combined to connect on 44.4% of field goals (8 of 18). Joseph was the Titans' fifth kicker last season, and he made the only field goal he attempted, which came in the playoffs.

Tennessee signed Tucker McCann as an undrafted free agent out of Missouri to compete with Joseph. But Joseph had been missing kicks in training camp, prompting the Titans not to wait until opening week to address the position this time around. Tennessee opens the season Sept. 14 at Denver.

“We got some time before a game, and that's when we decided to do it,” Vrabel said.

Gostkowski turned 36 in January. He left New England as the team's leading scorer with 1,775 points over 204 games. He's also second in NFL history with 205 postseason points. His career long kick of 62 yards came in 2017.

He missed a career-high four extra points last season after not missing more than three in any of his previous 13 NFL seasons. He was placed on injured reserve in October and underwent season-ending hip surgery. The Patriots released Gostkowski in late March.

Gostkowski impressed the Titans during his workout.

“Looked like the kickoffs were deep and in the position where (special teams coordinator) Craig (Aukerman) wanted them," Vrabel said. "I’m not going to try to make too much out of this. We had a workout, and we signed a player. And we’ll try to get him in here and get him going when he passes through the protocol.”

Only Tom Brady (41), Vinatieri (32) and Jerry Rice (29) have played in more playoff games. His six Super Bowl appearances are tied for second behind Brady.

The Patriots drafted him in the fourth round in 2006 out of Memphis.

NOTES: Vrabel worked on a side field with LB Vic Beasley Jr. on Thursday during the portion of practice open to media. Beasley remains on the non-footbal linjury list, but Vrabel said this is part of the return to play protocol. ... RB Darrynton Evans and CB Kristian Fulton returned to practice after missing the past week. RG Nate Davis also practiced after leaving Tuesday's practice on a cart.