Titans' comeback magic runs out in 27-24 loss to Steelers 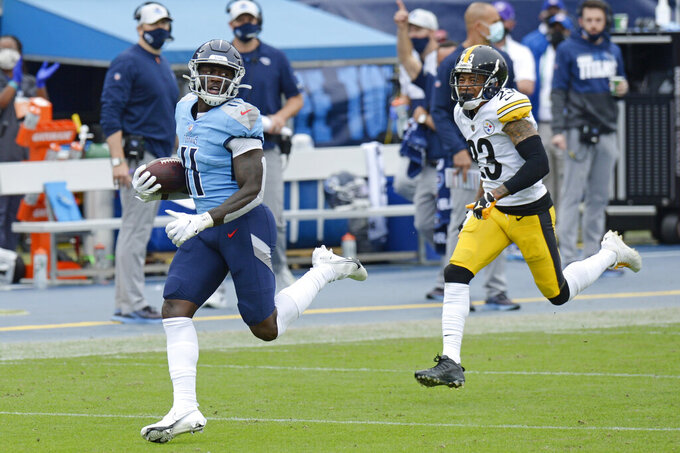 NASHVILLE, Tenn. (AP) — The Tennessee Titans had grown so used to rallying late in winning four of their first five games that they expected to do just that once again.

In a matchup of the AFC's remaining undefeated teams Sunday, the Pittsburgh Steelers made the Titans pay for their reliance on late-game theatrics by holding on for a 27-24 win in a game pushed back three weeks while the Titans dealt with the NFL's first COVID-19 outbreak during the season.

Pittsburgh (6-0) converted its first seven third downs of the game, chewing through the Tennessee defense that came in last in the NFL in that area. The Titans (5-1) allowed the Steelers to convert 13 of 18 on third down, and Pittsburgh scored on five of its first six drives.

The offense provided little help either.

Tennessee came in No. 2 in the NFL in both total offense and points scored. The Titans hadn't scored fewer than 31 points since rallying for a 16-14 win to open the season in Denver.

They opened the game with a three-and-out and three other such drives. They also turned it over on downs late in the first half when a bad snap resulted in an incomplete pass by punter Brett Kern. At one point, Pittsburgh had a 161-1 edge in total offense as the Titan struggled with too many penalties and mistakes.

“We have to be cleaner earlier in the game,” Titans quarterback Ryan Tannehill said.

Derrick Henry, the NFL rushing leader coming into the game, was held to 75 yards on 20 carries. He did key Tennessee's final scoring drive that he finished off with a 1-yard run. Henry said the heart of the Titans can't be questioned when they fight back.

“We knew that wasn’t us in the first half, the type of game we played,” Henry said. "It was time for us to battle back and see what kind of resiliency we have and what type of team we are. I thought we gave ourselves a great chance at the end.”

The Steelers led 24-7 at halftime and pushed that to 27-7 after their first possession of the third quarter.

That's when Tennessee finally showed signs of life. Tannehill found A.J. Brown across the middle, and the second-year receiver outran defenders for a 73-yard touchdown.

“We’re just trying to win,” Brown said. "That’s our mindset and today we fell short, but it was a play away. That’s a good team, and you can’t spot a good team (20) points and expect to win. I think we’re OK.”

The Titans came up with three interceptions, the last with 2:35 left by Amani Hooker in the end zone.

Tannehill was driving the Titans down the field when he was flagged for intentional grounding on first-and-10 at the Pittsburgh 25. Tannehill said he was trying to throw over Corey Davis' head to avoid being sacked by Cam Heyward.

The Titans quarterback couldn't connect with Davis on the next two plays, and coach Mike Vrabel sent Gostkowski out to try and tie it up.

“It’s unfortunate,” Vrabel said. “I fully expected him to make it, he expected to make it, and it didn’t turn out that way. We all have a lot to improve on."