Titans' gamble hiring Vrabel as coach close to paying off 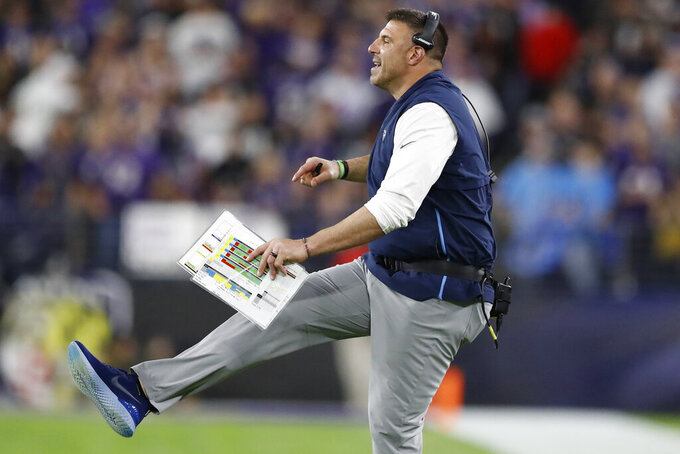 FILE - In this Jan. 11, 2020, file photo, Tennessee Titans head coach Mike Vrabel works against the Baltimore Ravens during the first half an NFL divisional playoff football game, in Baltimore. It’s taken first-time head coach Mike Vrabel two seasons, but the hands’ on former linebacker with three Super Bowl rings himself has them a win away from the franchise’s second Super Bowl berth. (AP Photo/Julio Cortez, File)

NASHVILLE, Tenn. (AP) — Titans safety Kenny Vaccaro listened to how coach Mike Vrabel praised his performance in Tennessee's wild-card win with the hint of a smile.

“I know how Vrabel is,” Vaccaro said. “He's tough. He wants you to be physical, gritty, grindy, and he just likes guys that are going to hit. I was hitting people like I've always hit people. I appreciate the compliment because he doesn't really give out too many.”

No, the second-year head coach doesn't waste much time with praise.

That's not why the Titans fired Mike Mularkey two years ago after losing in the divisional round of the playoffs, preferring to gamble on hiring a coach who could push them to compete for championships. They chose Vrabel as a first-time head coach, and the former 14-year linebacker with three Super Bowl rings has the Titans a win away from the franchise's second Super Bowl berth and first since the 1999 season.

Vrabel's message since mid-April has been pushing the Titans to find a way to go from good to great after three straight 9-7 seasons. Tennessee went 9-7 again during the regular season, but Vrabel isn't ready to grade his team yet, not before the AFC championship game Sunday at Kansas City (13-4). It will be the Titans' first time playing for the conference title since the 2002 season.

“Well, I think that we have certainly improved,” Vrabel said. “I think we've made progress. Something that we focused on a while back is just trying to continue to improve each and every week. So, how close we are, I don't know that. I know that we're going to do what we've done for a long time, and what we know is to prepare to try to go in and play with confidence and execute.”

That focus on improvement has endeared him to the Titans. He has a hands-on approach whether he's banging away at a football being carried by Derrick Henry during a running back drill or wearing a blocking pad to work on technique with linebackers and defensive linemen. Four-time Pro Bowl defensive lineman Jurrell Casey loves how Vrabel and all his coaches are involved and detail-oriented at practice.

But it's Vrabel's mindset that Casey appreciates most.

Vrabel dealt with numerous injuries during his first season, including starting quarterback Marcus Mariota missing the regular-season finale, which the Titans lost with a playoff berth on the line.

His biggest challenge came in mid-October this season. The Titans had scored only one touchdown in a 10-quarter stretch capped by a 16-0 loss at Denver that dropped Tennessee to 2-4. At that point, Vrabel benched Mariota for veteran Ryan Tannehill, who had been acquired in a trade with Miami to upgrade the backup position.

The Titans (11-7) are 9-3 since then, including winning their last three on the road. They clinched the AFC's No. 6 seed in the regular-season finale against AFC South champ Houston, beat the defending Super Bowl champion Patriots in New England and then knocked off the top-seeded Ravens in Baltimore. Vrabel is the Titans' first coach to win his first two postseason games since Jeff Fisher after the 1999 season.

Vrabel, who greets each player outside the locker room door after games, says he's made clear that everyone should be held accountable. That includes himself as he works to improve as a coach.

His approach has helped build a locker room where teammates hold each other responsible for their preparation and play.

“I ain't going say the guy is perfect, but he damn near understands football better than anybody in this building, outside this building,” Casey said. “ The guy, he's an intelligent dude. It's not really too much you can question that man.”

Safety Kevin Byard credits Vrabel for a culture change he calls “nothing short of incredible."

“Not only having the communication open with the players but actually getting on the field,” Byard said. “Not necessarily practicing with them but actually getting in the drills. I think that he really has done something special to the players as far as really being able to trust him and trust what he's trying to get us to do week in and week out."

With the Titans a win away from the franchise's second Super Bowl berth, Vrabel is continuing to push his team to be better than it was last week.

“That’s going to be the message,” Vrabel said.