Titans insist they can clean up some of their defensive woes 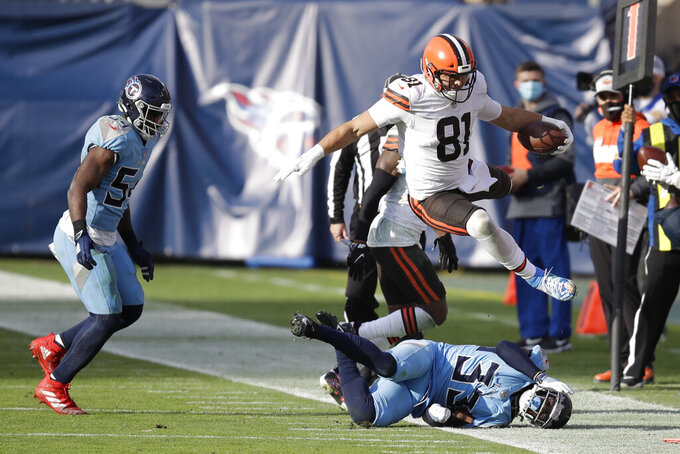 NASHVILLE, Tenn. (AP) — Vic Beasley Jr. is long gone, and Jadeveon Clowney is on injured reserve with an injured knee that limited him to eight games this season. Not a sack between them despite about $21 million combined in salary.

The Tennessee Titans rank next to last in the NFL in sacks and dead last on third downs, allowing opponents to convert 53.5%.

And they just gave up five touchdowns in the first half of a 41-35 loss to Cleveland.

“It's frustrating that we can't be consistent and get the job done like we do all week in practice,” Titans defensive tackle DaQuan Jones said Wednesday. “We've got to take what we do in practice to game day and go out there and execute. If we just do that, we go out there and communicate ... we’ll be doing so much better.”

The Titans (8-4) have covered their defensive issues by forcing turnovers, taking good care of the ball themselves, and have an offense scoring 29.9 points a game — third best in the NFL.

After the loss to the Browns, the Titans blamed communication issues and a lack of execution. Jones said they shot themselves in the foot. Coach Mike Vrabel, who didn't hire a defensive coordinator after Dean Pees retired, said Wednesday that talking to each other wasn't as big an issue as a lack of players doing their job.

“We didn’t have miscommunication amongst the players," Vrabel said. “We’ve got guys running in the same gap after somebody says, ‘Hey, this is where I’m coming,’ and then we get two guys in the same gap. I just label that, that’s a huge focus for us defensively this week, is not only communicating but doing our job.”

The Titans have only 14 sacks, one better than Cincinnati. Outside linebacker Harold Landry III leads the team with 4 1/2 sacks in his third season, and Jones said they are moving forward with the players they've got when asked about not having Clowney, who started eight of the first nine games.

“Whoever is out there has to execute at the high level that we hold ourselves to, and we’re not executing right now,” Byard said. “That’s just the bottom line.”

The Titans visit Jacksonville (1-11) on Sunday. They gave up 102 yards rushing to rookie James Robinson in Week 2 and followed that by allowing Dalvin Cook to run for 181 yards a week later. Since then, they've held opponents to 95 yards or less in five games and haven't allowed a 100-yard rusher.

As bad as they've been on third downs, the Titans had held four straight opponents to 41.6% or less before allowing Cleveland to convert 10 of 16 (62.5%) on third downs. It's an indication that yes, the Titans can execute better.

NOTES: Starting CB Adoree Jackson, who has yet to play this season, returned to practice Wednesday and was limited.