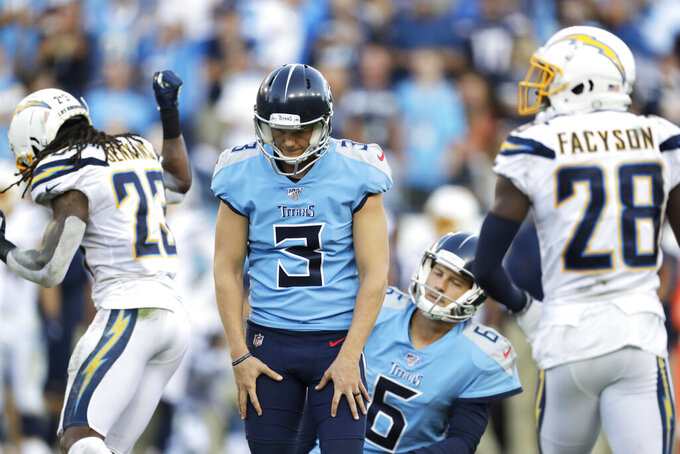 Tennessee Titans kicker Cody Parkey (3) reacts to missing an extra point by hitting the right upright in the second half of an NFL football game against the Los Angeles Chargers Sunday, Oct. 20, 2019, in Nashville, Tenn. (AP Photo/James Kenney)

NASHVILLE, Tenn. (AP) — Tennessee kicker Ryan Succop has been designated to return from injured reserve, allowing him to return to practice with the Titans.

Succop was put on injured reserve Sept. 4, needing more time to recover from offseason surgery on his right, kicking leg. Succop went through his usual pregame kicking routine last weekend. He cannot be added to the active roster until Monday at the earliest.

The Titans now are on their second kicker to replace Succop, having released Cairo Santos after he missed three field goals and had a fourth blocked in a 14-7 loss to Buffalo.

Cody Parkey made a 45-yarder in his first chance at a field goal in two games with the Titans (3-4), though he hit the right upright with an extra point in a 23-20 win over the Chargers last weekend.

Tennessee also signed outside linebacker Derick Roberson to the practice squad after waiving him from the active roster Tuesday.