Titans' Lewan: Bad day due to worrying more about messing up 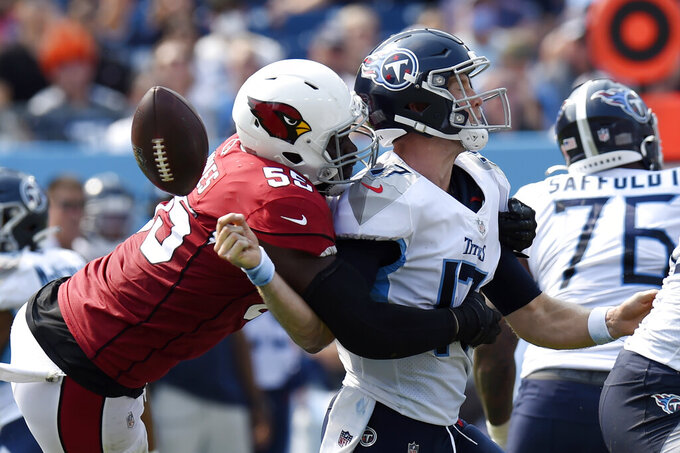 NASHVILLE, Tenn. (AP) — Tennessee Titans left tackle Taylor Lewan says he didn't deal well with his first game back after the first injury of his career, getting so amped up the three-time Pro Bowler was drained by kickoff.

That led to one of the worst performances of his career.

“I was more worried about messing up than I was being better,” Lewan said Thursday.

Lewan was victimized repeatedly by Arizona linebacker Chandler Jones, who finished with five sacks and two forced fumbles. The Titans gave up six sacks overall in a 38-13 loss to Arizona. Lewan was booed when he returned to the game in the third quarter after receiving intravenous fluids for cramping.

“It hurt,” Lewan said of the boos. “But at the same time, the way I was playing I don’t blame them. They want the team to do well. They're not just rooting for me, so I’m sorry for letting them down.”

Lewan tore his right ACL in mid-October last season. This was his first game since then, and Lewan said it was the first surgery other than having his tonsils removed when he was 21. He compared his performance to a game his second season in the league when Whitney Mercilus had 3 1/2 sacks in 2015.

The left tackle said he wound up more worried about messing up than being better.

“I got in a big panic mode in the first quarter and just trying to figure out what should I change, and that's not usually the route I go,” Lewan said. “It’s like, ‘Hey, let me keep working what I’m good at, what are my strengths as a football player and I wasn’t doing those things. So definitely one to learn from.”

“We know the type of player Taylor is,” Henry said. “I know he will come out, have a great week, and respond well on Sunday. He has a little adversity, it comes with the game, and it is all about how you come back from it.”

The Titans (0-1) now visit Seattle (1-0) on Sunday in the first game before fans since 2019. Lewan said he doesn't want to go through another game like his last and is working hard in practice to correct his issues.