Titans look to rebound from OT loss as they host Broncos 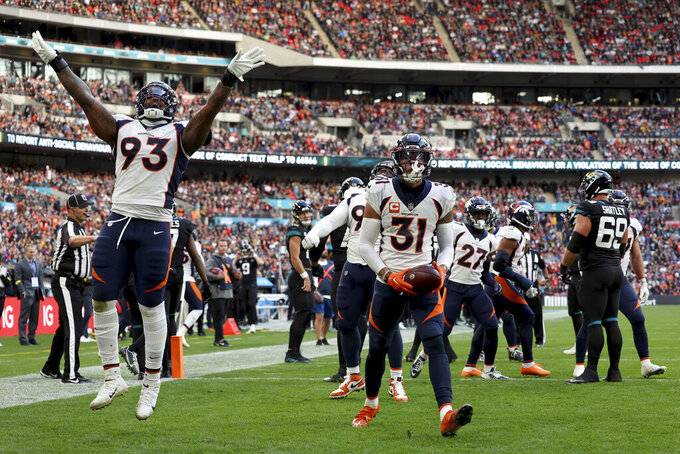 TURNOVER DIFFERENTIAL: Broncos even; Titans plus-3

BRONCOS PLAYER TO WATCH: DE Dre’Mont Jones has 5½ sacks, one shy of his career high and is having a breakout year in his fourth NFL season. The Broncos’ trade of OLB Bradley Chubb opens the path for him to be even more productive and to cash in with a contract extension. He’ll be especially counted upon this week with the Broncos facing RB Derrick Henry. As Titans coach Mike Vrabel told Denver reporters, “I don’t know if anyone’s playing better than Dre’Mont Jones.”

TITANS PLAYER TO WATCH: Henry. The two-time NFL rushing leader is back on top of the league once again with 870 yards. He just set the franchise's career rushing mark with 74 touchdowns, topping Earl Campbell's previous mark of 73. He also has 77 total career TDs, topping Eddie George's mark of 74 in Week 8. He's the biggest reason Tennessee has only 100 fewer yards rushing than passing this season.

KEY MATCHUP: Denver's run defense against Henry. The Broncos rank second in fewest points allowed and have the NFL's second-stingiest defense against the pass. But they give up an average of 122.6 yards rushing per game, and Henry has topped 100 yards in five straight games by himself.

SERIES NOTES: The Titans have won three of the past five games in this series. They're also 35-16 since losing at Denver on Oct. 13, 2019. That puts them fourth in the NFL with a .686 winning percentage in that span.

STATS AND STUFF: QB Russell Wilson is two touchdown passes shy of 300 for his career. He only has six TD throws in seven games so far. ... In three starts against the Titans, Wilson has thrown for 973 yards with six TDs and no interceptions. ... Denver RB Melvin Gordon has averaged 125 yards rushing in three games against Tennessee. ... RB Latavius Murray has rushed for a TD in two of the three games he’s played for Denver this year after being signed off the Saints practice squad. ... Denver WR Jerry Jeudy had six catches for 63 yards and a TD against the Jaguars in Week 8. All three of his TD receptions have come on the road this season. ... WR Courtland Sutton has been held to six catches for 50 yards and no touchdowns over his past three games as the offense has featured Jeudy, KJ Hamler and rookie TE Greg Dulcich instead. Sutton had 76 yards receiving in his previous game against the Titans. ... Dulcich led the team with 87 receiving yards in Week 8. ... Titans DL Denico Autry has six sacks in the past five games. ... The Titans have used 20 different starters on defense. ... Titans rookie P Ryan Stonehouse leads the NFL in averaging 53 yards per punt. ... The Titans lead the NFL in scoring TDs on 78.9% of their trips inside the red zone with 15 on 19 chances. ... The Titans rank second in allowing 87.6 yards rushing per game. ... The Titans have had at least three sacks in five straight games, one off the franchise's longest streak since 1979. ... The Titans also have had at least one interception in six straight games, one off the stretch of eight straight in 2010 for longest in team history. ... TE Chigoziem Okonkwo led the Titans with a season-high 48 yards receiving last week. ... Two-time All-Pro S Kevin Byard led the Titans with 12 tackles last week.

FANTASY TIP: Henry. The man not only has topped 100 yards in five straight games, Henry also has run for two TDs in the past two games with six over his past seven games.