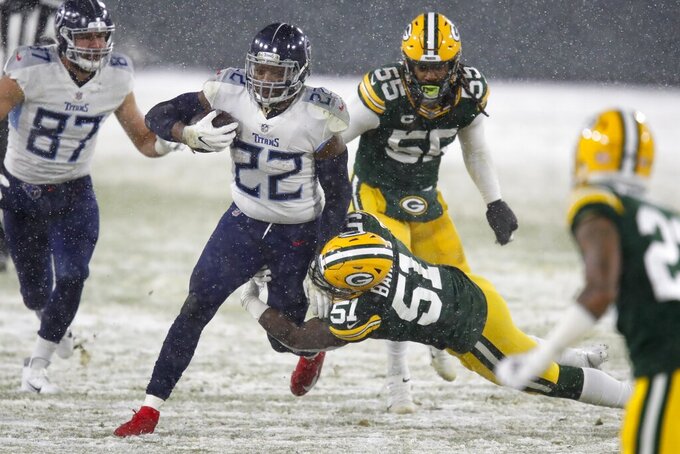 GREEN BAY, Wis. (AP) — The Tennessee Titans still have a direct path to their second straight postseason berth even after wasting an opportunity to clinch their first AFC South title since 2008 on Sunday.

But it’s hard to imagine Tennessee lasting long in the playoffs if its offense ever sputters again the way it did in a 40-14 loss to the Green Bay Packers (12-3) on a snow-covered Lambeau Field. The Packers scored the game’s first 19 points and last 21 points.

“I don’t think you can do that against anybody, with the mistakes that we made and the start that we had,” Titans coach Mike Vrabel said. ”(It’s) just not going to be good enough and just too inconsistent.”

Tennessee (10-5) posted its lowest point total of the season and squandered a chance to clinch its first AFC South championship since 2008. The Titans still can clinch a division title by winning at Houston (4-11) next week.

“Our season ain’t over,” Titans defensive tackle DaQuan Jones said. “We have a huge game next week and we have to come ready to play, so the fastest we can shrug this off and get back to the drawing board and get ready for Houston, the better. We cannot let this deter us, knowing where we are right now in our division and knowing the opportunity coming up. It’d be dumb to sit there and let this game weigh heavy on your mind and stop you from preparing for next week.”

The Titans have gotten to this point by winning a number of shootouts, as they had entered Sunday as the NFL's highest-scoring team.

Tennessee’s defense has struggled to such an extent all season that the Titans need their high-powered offense to be in peak form.

For most of the year, that offense has delivered. Not this time, though.

Ryan Tannehill went 11 of 24 for 121 yards with a pair of interceptions. Tannehill had a touchdown run and a touchdown pass in a span of about 3 ½ minutes midway through the game to cut a 19-0 deficit to 19-14, but those were all the points Tennessee would produce all night.

“Those two drives were really all we had going the whole day,” Tannehill said.

“We expect to go get points,” Tannehill said. “We face a good offense, a good team, you’re going to have to score points. We knew that going in, and we didn’t get it done.”

Tennessee’s Derrick Henry rushed for 98 yards on 23 carries, ending his streak of nine consecutive road games in which he’d run for at least 100 yards. Henry was one off the NFL record held by Barry Sanders, who reached the century mark in 10 straight road games during his Hall of Fame career.

The bigger warning sign for Tennessee may be that Henry was outrushed by Packers rookie A.J. Dillon, who had spent over a month on the COVID-19 reserve list and entered Sunday with just 115 yards rushing all season. Dillon ran for 124 yards and two touchdowns, including a 30-yarder on a fourth-and-1 play.

“They played better than us, and they won,” Henry said. “It’s plain and simple. They were the better team tonight.”

Green Bay outrushed Tennessee 234-156. That’s certainly no fault of Henry, but it reflects the Titans’ season-long struggles on defense. Tennessee has done a better job of defending the run than stopping the pass this season, but the Titans struggled on Sunday.

The Titans have given up 173 points in their five losses. They’ve yielded at least 27 points in each of those defeats.

It’s probably unrealistic to expect that defense to suddenly make dramatic improvements this late in the season. That means the offense must get back to the level it’s played at virtually all season.

If the offense keeps playing the way it did Sunday, the Titans won’t have a long postseason run. If that offense doesn’t bounce back in Houston next week, the Titans might not even get to the playoffs at all.

“We expect to go get points,” Tannehill said. “We face a good offense, a good team, you’re going to have to score points. We knew that going in, and we didn’t get it done.”