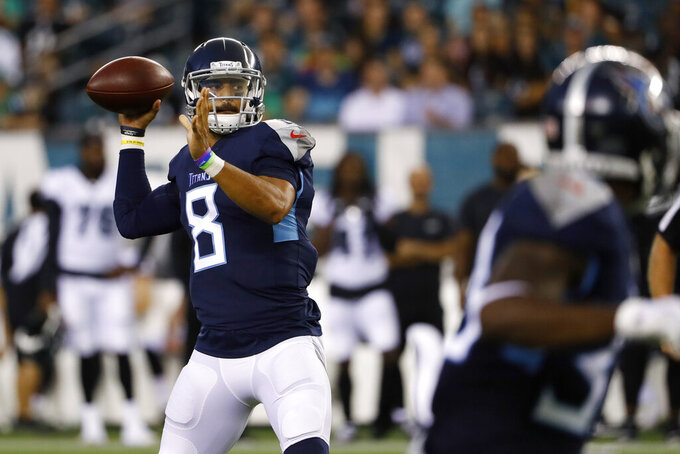 Tennessee Titans' Marcus Mariota throws a pass during the first half of the team's preseason NFL football game against the Philadelphia Eagles, Thursday, Aug. 8, 2019, in Philadelphia. (AP Photo/Matt Rourke)

NASHVILLE, Tenn. (AP) — The Tennessee Titans already have more points in a game with their new offensive coordinator than they managed in any game last preseason.

So the early results from Arthur Smith and the Titans' offense are encouraging.

Not bad considering a coordinator calling plays in his first game of any kind had to make a late pregame adjustment, moving to the sideline from the coaches' box when the headsets were down until too close to kickoff.

By beating beat Philadelphia 27-10 on Thursday night, the Titans scored more points than in 13 games last season with now Green Bay head coach Matt LaFleur calling plays. They ran 80 plays while holding the ball for nearly 38 minutes. And a team ranked next to last in the NFL for passing attempts (437) in 2018 threw the ball 44 times — more than in any game last season.

Vrabel, who also notched his first preseason win as the Titans coach, said Friday his team accomplished some good things in Smith's debut.

"For the most part, I felt the communication between him and the quarterbacks were good," the second-year head coach said of Smith. "He had an idea of where he wanted to go on the next play. I tried to tell him, 'Hey, I think we're going to be in four-down territory, let's have a couple of plays ready.' So, I thought that that communication was good."

The Titans have shared little of what they want the offense to look like this season with Mariota in the final year of his contract other than to say it will be quarterback friendly.

Mariota had the worst numbers of Tennessee's three quarterbacks playing only one series.

Mariota liked how his communication with Smith went.

"Pretty smooth," Mariota said after the game. "I thought the operation in and out of the huddle went well. And I think everything was pretty clean and crisp."

Scoring touchdowns inside an opponent's 20 has been a big focus during training camp after the Titans ranked 27th last season averaging 19.4 points per game. The Titans scored twice from inside the 20, though they also turned the ball over on downs on Mariota's drive when Vrabel went for it on fourth-and-7 at the Eagles 23.

"We've tried to be able to be very efficient in the red zone," Vrabel said. "It's something that we have to improve and try to score touchdowns, and we did that."

Both Ryan Tannehill, the new backup quarterback the Titans picked up in a trade from Miami, and Logan Woodside produced. Tannehill had a 126.7 passer rating after throwing for 138 yards and two touchdowns, and Woodside added two more TDs and 130 yards with a 138 passer rating.

The Titans dropped too many passes for Vrabel's taste, including one on a would-be TD. A team that had the fewest penalties in 2018 with just 82, a franchise-low for a 16-game season, was penalized 12 times for 117 yards. The Titans also gave up three sacks, and Vrabel didn't like the pressure allowed up the middle.

"When you're trying to throw the football, that's the last place you want to see leaks," Vrabel said.

Notes: The Titans have three days of practices before the defending Super Bowl champion Patriots come to Nashville for joint practices Wednesday and Thursday ahead of their preseason game Aug. 17.