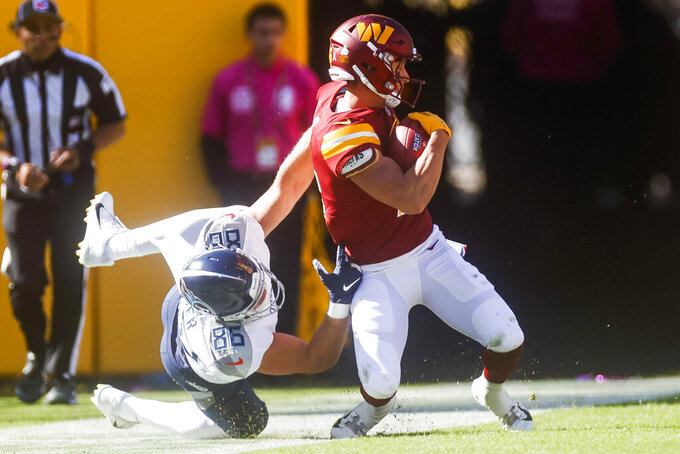 Washington Commanders wide receiver Dax Milne (15) gets brought down by Tennessee Titans tight end Kevin Rader during the second half of a NFL football game on Sunday, Oct. 9, 2022, in Landover, Md. (Shaban Athuman/Richmond Times-Dispatch via AP)

NASHVILLE, Tenn. (AP) — Having a bye at the NFL's first opportunity is not usually not what anyone wants.

The battered Tennessee Titans are in no position to complain, needing this break both to heal and fix a laundry list of issues.

“This is when it falls, and certainly we’ll use the time best to our advantage to try to get guys back healthy, give some guys some rest that have played a lot of football for us and we’ll see if (we can) find ways to improve,” coach Mike Vrabel said Monday.

The Titans (3-2) have won three straight by a combined 13 points, the latest a 21-17 win at Washington. Their rally from an 0-2 start has allowed the two-time defending AFC South champs to claw their way from the bottom of the division back to the top.

And they're a missed field goal and a blown lead from being 4-1.

The defense. At least when defending the run and making big stops when it matters most, not bad for a unit that has started an NFL-high 20 different defenders already after using 26 last season. They haven't allowed more than 101 rushing yards since then and have allowed 38 and 43 yards in each of the past two games.

Tennessee broke up a 2-point conversion pass to preserve its first win of the season over Las Vegas, and linebacker David Long Jr. got the interception at the goal line to seal its latest victory on Sunday over Washington.

The offensive line. The Titans at least ended a seven-quarter scoreless drought in the second half. But a late scratch of right guard Nate Davis left Tennessee with yet another new starter on the offensive line, and Tannehill was sacked five times and hit 13 after being sacked only seven times combined coming into the game.

Derrick Henry. The two-time NFL rushing champ has strung together back-to-back 100-yard rushing games, climbing to fifth in the league with 408 yards rushing entering Monday. He's fourth with five rushing TDs entering Monday. Henry also has blossomed as a pass-catching threat with 10 catches for 121 yards over this three-game streak.

CB Caleb Farley. The first-round pick of 2021 played only nine snaps against Washington, his second game this season where he played fewer than 10 defensive snaps. He has size at 6-foot-2, 197 pounds, but Farley currently is backing up rookie Roger McCreary.

The Titans already have 11 players on injured reserve with their top draft pick, wide receiver Treylon Burks, added to the list the day before their win at Washington. Three starters were scratched from that game with LB Zach Cunningham (elbow) and S Amani Hooker (concussion) missing their second straight.

OLB Bud Dupree has played 21 snaps combined over the past month, missing two other games with an injured hip. Starting RG Nate Davis (knee/foot) was a late scratch after apparently getting hurt in practice last week.

43 — That's the number of penalties the Titans have been flagged for this season, too many for a team that has been one of the NFL's least-penalized teams since Vrabel took over as head coach in 2018. They ranked seventh for fewest penalties since 2018.

They were flagged eight times for 69 yards against Washington. Vrabel refused to discuss penalties Monday to avoid being fined, saying “Let the league talk about penalties and officiating."

Heal up. Then they host Indianapolis on Oct. 23 with a chance to sweep the Colts, then face a two-game road swing at Houston capped by a prime-time game at Kansas City. Then they'll have five games in Nashville starting Nov. 13 to try to stay atop the division.