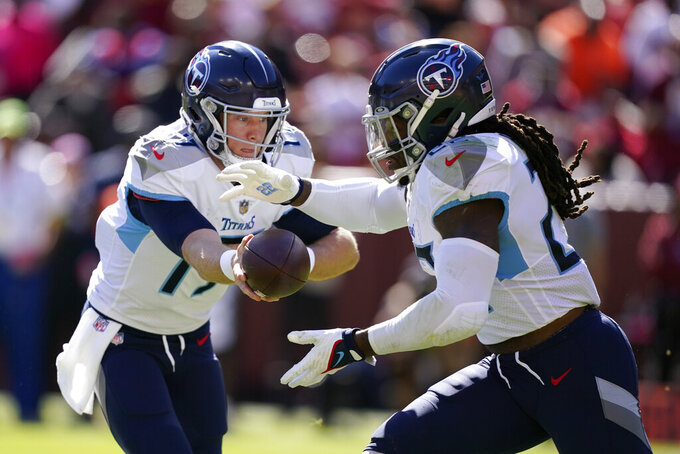 Tennessee Titans quarterback Ryan Tannehill, left, hands the ball off to running back Derrick Henry in the first half of an NFL football game against the Washington Commanders, Sunday, Oct. 9, 2022, in Landover, Md. (AP Photo/Alex Brandon)

NASHVILLE, Tenn. (AP) — The start to this season feels painfully familiar to both the Tennessee Titans and their fans.

Yes, it's a bad case of deja vu because of injuries. The Titans have 11 players on injured reserve five games into this season after setting an NFL record last year by using 91 different players in a non-strike season.

Mike Vrabel was named the AP Coach of the Year for guiding Tennessee to the AFC's No. 1 seed and a 12-5 record despite his staff working with a rotating roster.

This time around, Vrabel and the Titans (3-2) face bigger challenges.

They are among the first four NFL teams to get a bye week, leaving a slog of 12 straight games with no break. Last year, their bye was the first week of December. And an NFL rule change will limit Tennessee to bringing only eight players back from injured reserve. There was no such limit last year.

“I don’t think we ever think just because we did something last year or last week that we are just going to roll it out there and be able to survive,” Vrabel said. “That has never been our attitude here.”

The injuries started right after the final roster cuts. Pro Bowl outside linebacker Harold Landry III tore an ACL in practice on Aug. 31, knocking out the guy who led Tennessee with a career-high 12 sacks last season. Left tackle Taylor Lewan's season ended Sept. 24 after he hurt the same right knee that ended his 2020 season.

The Titans started 0-2 thanks to a 47-yard field goal that missed just left in the season opener. They have won three straight by a combined 13 points to claw their way from the bottom of the AFC South back to the top of the division they've won each of the past two seasons.

An interception at the goal line secured a 21-17 win over Washington and a three-game winning streak ahead of the bye.

The Titans used a 20th different starter on defense in that game — most in the NFL this season. Defensive back Joshua Kalu got his first start, putting Tennessee six starters from matching the 26 used on defense last season when it ranked fourth-highest in the league in that category.

Only five Titans have started every game on defense, led by two-time All-Pro safety Kevin Byard. The changing roster has kept Tennessee from cleaning up issues like penalties and missed tackles, but Byard credits the Titans' culture with keeping everyone close with no finger-pointing.

Vrabel is a big reason the Titans are on a three-game winning streak despite the injuries and an offense that has scored only two touchdowns after halftime this season.

He keeps Tennessee practicing situational drills repeatedly, especially in the red zone. The Titans lead the NFL in scoring inside an opponent's 20 on offense and are tied for fifth when the defense is backed up against its own goal line.

Ryan Tannehill, now 33-15 as a starter with this franchise, credits the message Vrabel sends each week and a close-knit locker room. Not one player on the active roster has been a part of a losing record with Tennessee, which has six straight winning seasons.

The Titans will host Indianapolis on Oct. 23 with a chance to sweep their division rival for a second straight season. Tannehill said it comes down to staying hungry with 12 games remaining.

The bye could help the Titans get some starters back including right guard Nate Davis, outside linebacker Bud Dupree and safety Amani Hooker. Wide receiver Treylon Burks, the 18th pick overall, still has to miss three more games with an injured left toe that put him on injured reserve.

The Titans also know they have plenty of room left for improvement, even from two-time NFL rushing champ Derrick Henry, who has put together back-to-back 100-yard rushing games. Henry is on pace for his best season yet as a receiver and has been a big key to this winning streak.

“That’s always the focus, just focusing on getting better and improving," said Henry, who missed the final nine games last year with a broken right foot. "No matter what the outcome is, we continue to do it each and every day and get ready to work when we come back.”