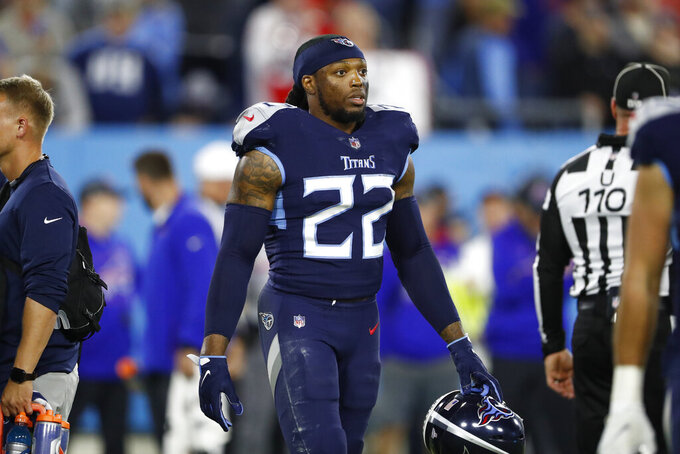 FILE - Tennessee Titans running back Derrick Henry walks on the sideline during an NFL football game against the Buffalo Bills on Monday, Oct. 18, 2021, in Nashville, Tenn. The Titans have moved a step closer to having the 2020 AP NFL Offensive Player of the Year back, opening the 21-day window Wednesday, Jan. 5, 2022, for Derrick Henry to start practicing. (AP Photo/Wade Payne, File)

NASHVILLE, Tenn. (AP) — The Tennessee Titans have made the easy move opening the 21-day window for Derrick Henry to practice Wednesday.

The next decision, particularly the timing, will be more challenging.

Taking the 2020 AP NFL Offensive Player of the Year off injured reserve by Sunday means he could help beat Houston, clinching the AFC's No. 1 seed. Waiting means the Titans try to earn the first-round bye without Henry, giving him more time to shake off the rust from missing the past nine weeks with a broken right foot.

“See how he responds and ask him to start doing some of those things that he's going to need to do in the football game,” coach Mike Vrabel said Wednesday. “No different than what we have done with any other guy that’s come back from the injured reserve and as they start their return to play.”

The Titans have to balance Henry's health against the benefits of playing in a game compared to the quality of work available in practices at the end of the NFL regular season.

“We will try to do everything we can for the players that are coming back to try to recreate, to give them the confidence and the trust that they can go out there and do their job,” Vrabel said. “We try and do that with every player that is returning.”

Henry, who turned 28 on Tuesday, broke his right foot Oct. 31 and had surgery Nov. 2 to repair his fifth metatarsal. Henry led the league with 937 yards rushing when he was put on injured reserve, and the NFL's 2019 and 2020 rushing leader still ranks sixth in the league despite missing eight games.

The 6-foot-3, 247-pound Henry has been out nine weeks counting the Titans' bye Dec. 5. Henry is averaging a league-high 117.1 yards a game. He is averaging 4.3 yards per carry with 10 touchdowns rushing.

The Titans (11-5) clinched their second straight AFC South championship last week with a 34-3 rout of Miami. A win Sunday over Houston (4-12) would give Tennessee the franchise's third No. 1 seed in the AFC since leaving Texas and first since 2008. Even better would be practice for Henry.

But Henry has 461 yards rushing with five TDs combined in his past two games in Houston.

One factor could be the Texans play on an artificial surface, similar to Indianapolis where Henry played his most recent game. Using more of the 21-day window would allow Henry to return on natural grass in Nashville in the wild-card round at worst and divisional round with the bye as the No. 1 seed at best.

“There’s a lot of factors that go into decisions that we make,” Vrabel said.

Quarterback Ryan Tannehill said the Titans would like to have Henry back as soon as possible.

“We would like to get him back as soon as we can,” Tannehill said. “We will see when that is going to be. He has to work through some things and get ready to go, but excited for the steps he has taken and the work he has put in to get to this point. Hopefully it is sooner rather than later."

Pro Bowl safety Kevin Byard said obviously having Henry back would be great for everybody and the offense.

“I know he’s excited, so we’re all excited,” Byard said.

Tennessee has used a committee approach to replace Henry, who became the eighth man to run for at least 2,000 yards last season with 2,027 yards. The Titans currently rank third in the NFL in averaging 142.5 yards a game.

Adrian Peterson was waived after three games. D'Onta Foreman, who played six games with Tennessee last season, was signed and has 497 yards with three 100-yard games since being signed off the street Nov. 2. Dontrell Hilliard is averaging 6.2 yards per carry with 293 yards rushing and also has 18 catches for 86 yards.