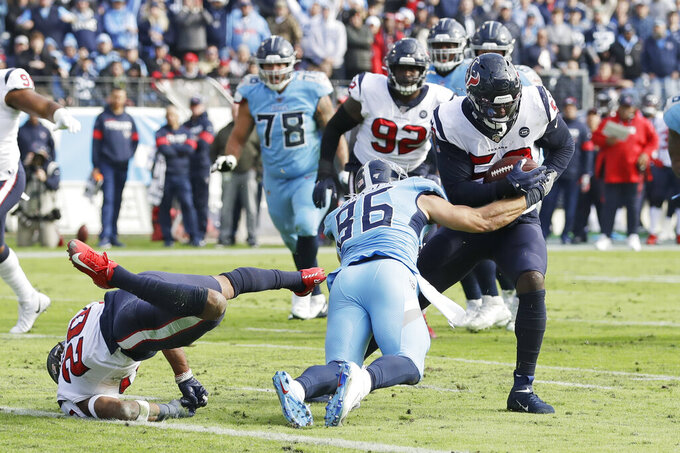 NASHVILLE, Tenn. (AP) — The Tennessee Titans have a serious problem getting started at kickoff.

They've failed to score even a point in the first quarter of eight games this season and are 2-6 in those games. In five of them, they didn't score in the first half. And lost all five.

Since Ryan Tannehill took over as the starting quarterback, they've been very good at scoring points in the second half. That's why they've gone 6-2 and find themselves still in playoff contention at 8-6 with two games remaining.

Starting faster, beginning Sunday when they host the New Orleans Saints (11-3) will be key in whether this franchise reaches the postseason for the second time in three seasons.

“We've just got to be on the same page,” tight end Jonnu Smith said. “I know we're not going to be perfect all the time. I feel like we've just got to start fast, not only on offense, but all areas, and feed off each other's energy, and I think we'll put ourselves in a better position coming out.”

After trailing 14-0 at halftime last week to Houston, the Titans tied it up early in the fourth. They just couldn't get the lead and lost 24-21 along with a chance to sit atop the AFC South with two games left.

Tannehill said the Titans have been moving the ball. They drove into field goal range after an interception by safety Kenny Vaccaro. Ryan Succop had a 45-yard field goal blocked and wound up on injured reserve Wednesday. The Titans went three-and-out, then drove to the Houston 5 before tight end Anthony Firkser had the ball popped out at the goal line for an interception.

That puts an emphasis on finishing drives, which the Titans have been good at once they get inside an opponent's 20. They lead the NFL in scoring touchdowns in the red zone at 73.1%.

“So, I think not so much that we got off to a slow start, we just didn’t finish the drives that we needed to finish and got behind," Tannehill said. “Obviously, something we’ll look to do this week is be able to finish those drives, put points on the board and get the momentum going.”

That will be crucial against the Saints, who have outscored opponents in each of the first three quarters. They've only been outscored in the fourth.

Titans coach Mike Vrabel said Thursday he's not sure if the issue has been simply starting slow.

“It’s about finishing drives and finishing those things off,” Vrabel said. “We’ve got a lot of confidence in the red zone right now, where we’re at and what were doing, and our ability to find a way into the end zone.

“So, hopefully that can continue, especially tomorrow when we focus on the red zone.”