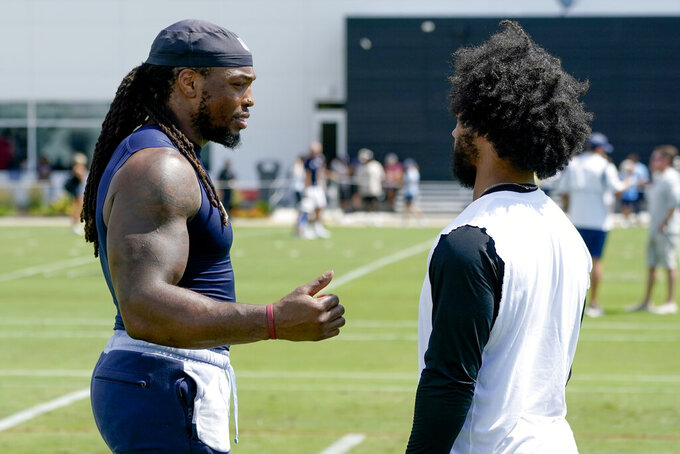 OPENING LINE: Titans by 5 1/2, according to FanDuel SportsBook.

TURNOVER DIFFERENTIAL: Giants minus-8; Titans minus-3.

TITANS PLAYER TO WATCH: WR Treylon Burks. The rookie was the 18th pick overall used with the selection acquired from Philadelphia trading away A.J. Brown, who was QB Ryan Tannehill's favorite option.

KEY INJURIES: The Titans already have four on injured reserve, led by Pro Bowl OLB Harold Landry III, who tore an ACL in practice Aug. 31. Landry led the team with a career-high 12 sacks last season. ... Giants first-rounder Kayvon Thibodeaux (knee) and fellow OLB Azeez Ojulari (calf) are doubtful to play, but were traveling with the team.

SERIES NOTES: The Titans have won six of the past seven in this series with the Giants' lone win in that span in Nashville on Dec. 7, 2014, in a 36-7 rout. That was during Ken Whisenhunt's lone full season as head coach as Tennessee went 2-14. The Titans are 2-1 at Nissan Stadium against the Giants, who are 3-3 overall on the road in this series.

STATS AND STUFF: Titans coach Mike Vrabel is 2-2 in season openers. ... This is Brian Daboll's NFL debut as the Giants head coach after being hired away after four seasons as Buffalo's offensive coordinator. ... The Titans are two-time defending AFC South champs looking for a fourth straight playoff season after earning the No. 1 seed in the AFC last season. ... The Titans, Buffalo, Kansas City and Green Bay are the only NFL teams to reach the postseason each of the past three years. ... Only Kansas City has more consecutive winning seasons with nine than Tennessee with six. ... The Titans have 21 new players since the end of last season. ... Tannehill's 30 wins are the most by a starting QB for the Tennessee franchise in his first three seasons with the team. ... Giants QB Daniel Jones is going into his fourth season. The sixth overall pick of 2019 has thrown for 8,398 yards and 44 TDs with 29 interceptions. He was limited to 11 starts with 2,428 yards and 10 TDs and seven interceptions last season. ... Tennessee ranked second in rushing defense and sixth in scoring defense with a pair of Pro Bowlers back in two-time All Pro Kevin Byard and defensive tackle Jeffery Simmons. ... The Titans went an NFL-best 6-1 in games decided by three points or fewer last season. ... WRs Kenny Golladay and Kadarius Toney are looking for their first TDs as Giants after failing to reach the end zone even once last season.

FANTASY TIP: Henry. His worst game last season was in an opening loss to Arizona, and the two-time NFL rushing champ, who led the league when he broke his right foot Oct. 31 and still finished ninth in rushing despite missing the final nine games of the regular season. Henry is fourth in team history with 6,797 yards rushing.