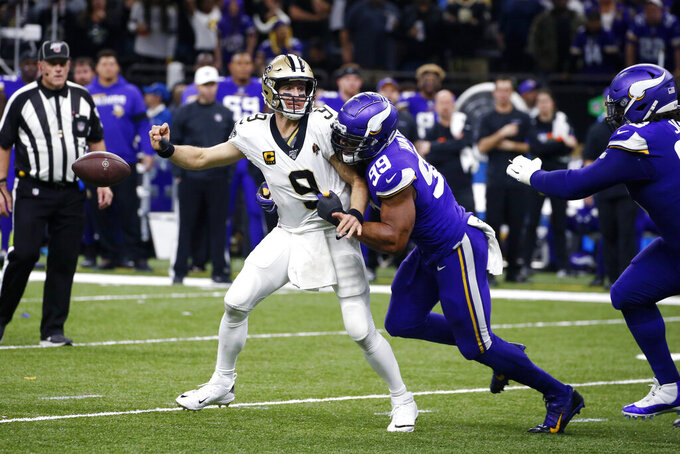 Tom Brady, who wants to keep playing next season at age 43, was overshadowed on wild-card weekend by a QB who threw for just 72 yards.

Drew Brees, who turns 41 this month, followed up what might have been his best season ever with a dud that featured his first multiple-turnover game of the season on a day he wasn't even the best QB on his own team.

The Patriots' 20-13 loss to the Tennessee Titans at Gillette Stadium marked New England's earliest exit from the playoffs in a decade.

Only twice in Brady's two decades in New England has his season ended earlier. In 2002, he missed the playoffs at 9-7 and in 2008 he blew out a knee in the opener and watched the Patriots miss out again despite going 11-5.

Without his usual weaponry on offense, Brady faded down the stretch. The defending Super Bowl champs looked unbeatable over the season's first half, dominating opponents whom they outscored 250-61 through eight games.

That all changed beginning with a 37-20 loss to Jackson and the Ravens on Oct. 27 in Baltimore. From that point on, the Patriots won just four of nine games and were outscored 184-183.

It was during one of those early-season blowouts that Patriots coach Bill Belichick exploited another loophole in the NFL rule book that came back to haunt him in the playoffs.

Belichick realized he could just eat up game clock with a series of delay-of-game or false-start penalties prior to a punt and oddly he exposed this loophole late in a 33-0 blowout of the Jets on Oct. 21.

"It was just the way the rules are set up," Belichick said after that game. "We were able to run quite a bit of time off the clock without really having to do anything. It's a loophole that'll be closed and probably should be closed. But right now, it's open."

While Belichick was smirking on the sideline when he was the one doing it to the Jets, he was furious Saturday night and yelled at the officials when Titans coach Mike Vrabel employed that same strategy -- and at a much more opportune time.

Tennessee was ahead 14-13 when Vrabel had the Titans run nearly two minutes off the clock before punting the ball to New England with four minutes left. The Patriots went three-and-out and didn't get the ball back until 15 seconds remained, still down by one.

Brady forced a pass that was intercepted and returned for a touchdown, sealing the loss in what could be Brady's final game for New England if he decides to play elsewhere in 2020.

Except that he was the one who paid the price.

Brady finished with a 59.1 passer rating, throwing for 209 yards with no touchdowns and an interception. His counterpart, Ryan Tannehill, only completed 8 of 15 passes for 72 yards but one of those was for a touchdown and another was a 22-yarder to Derrick Henry, who also rushed for 182 yards.

In New Orleans on Sunday, Brees completed 26 of 33 passes for 208 yards but he threw a costly interception that led to a Vikings touchdown and committed his first fumble of the season on one of his three sacks. The Saints had set an NFL mark with just eight turnovers in the regular season.

Brees was outplayed not only by Minnesota's Kirk Cousins but also by his own teammate, do-everything backup Taysom Hill, who became the first player in the playoffs with 25 or more yards rushing, receiving and passing.

Hill's 50 yards rushing on four carries led the Saints, who got just 21 yards rushing from Alvin Kamara. Hill also threw a 50-yard pass and had two receptions for 25 yards, including a 20-yard touchdown.

(Wondering if Jerry Jones asked Mike McCarthy about the Packers cutting Hill in 2017 after the former Brigham Young star first flashed his skills in Green Bay that summer).

The Patriots and Saints were considered the most dangerous lower seeds in their respective conferences but neither could get out of the wild-card round.

The Patriots saw their three-year run to the Super Bowl end — along with their eight consecutive appearances in the conference championship — and the Saints lost on the final play for the third consecutive year.

Two years ago, it was on the Minneapolis Miracle and last year it was in overtime to the Rams after the infamous non-call on a blatant pass interference, which led to a rules change in 2019.

This time, it was on a tight end Kyle Rudolph's touchdown grab in overtime that gave Minnesota a 26-20 win moments after Cousins hit Adam Thielen for 43 yards to the Saints 2-yard line.

Saints fans argued that Rudolph pushed off defensive back P.J. Williams on the game-winning catch.

Many TV commentators and NFL rules analysts said offensive pass interference should have been called on the field or by the league office in New York. But officiating chief Al Riveron said that while there was contact by both players, "none of that contact rises to the level of a foul."

"Nineteen years in this league, I've got it as OPI," Parry said. “I mean, I have a right arm that's extended. There's clear separation. And at the end there is a push, which creates the advantage based on the defender's body going back into the field of play. So, the receiver can take advantage and get up and get the football. I have it as offensive pass interference.”

Wil Lutz kicked a 49-yarder at the end of regulation to tie it at 20, but the Saints blew a chance to take another shot or two at the end zone and avoid overtime altogether.

Brees lamented a false start penalty that triggered a 10-second runoff shortly before Lutz's game-tying kick. If not for the penalty, the Saints would have had a second-and-10 from the Minnesota 26 with 21 seconds left. Instead, the ball went back 5 yards and there were 11 seconds remaining.

Brees threw an incompletion and Lutz trotted out for the field goal.

"That was costly,” Brees said, noting that without the penalty, the Saints might have taken a couple of more shots at the end zone.

The Saints also could have avoided the 10-second runoff by calling their last timeout, which they ended up not using.