'Too good to be true': Buzz surrounds Burrow during bye week 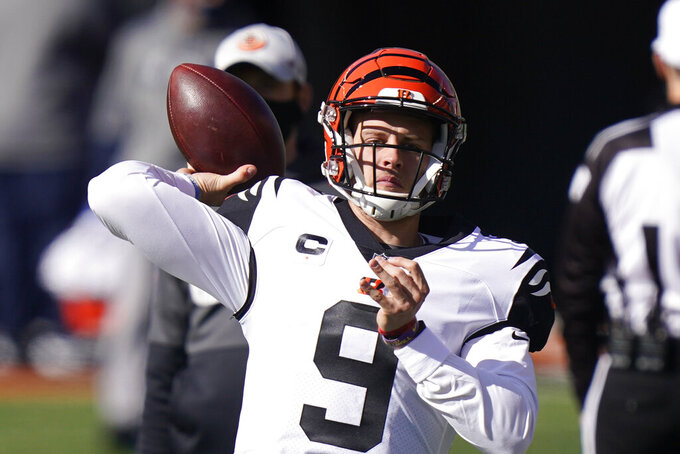 Coach Zac Taylor says rookie quarterback Joe Burrow was the one piece the Cincinnati Bengals needed to get the other pieces of an already good offense to coalesce and play at a higher level.

Taylor's framing of the narrative is meant to recognize some of the guys who slogged through a 2-14 season with him last year, while acknowledging that the linchpin is the 23-year-old newcomer whose dynamic play has brought some excitement back to a franchise that was stuck in the mud.

The 2019 Heisman Trophy winner has made the Bengals interesting to watch again, and arguably better than their 2-5-1 record reflects. At the halfway point of the season, Burrow's development has exceeded expectations in Cincinnati and validated the organization's decision to make him the No. 1 overall draft pick last spring. He's already being talked about as a candidate for Offensive Rookie of the Year.

Burrow certainly has made his share of drive-killing rookie mistakes, but he's also demonstrated the poise and creativity of a seasoned NFL quarterback. The prevailing opinion is that if he stays healthy, he can be the guy here for the long haul.

“I wouldn’t say it’s gone smoother than I thought — I thought I’d play well,” Burrow said Wednesday. “There’s obviously still a lot of room to improve. I’m just scratching the surface on where I can be and where I can go. So, that’s the most exciting thing for me.”

Burrow leads the league in passing attempts (330) and completions (221), and is third in passing yards (2,272). He’s also been sacked 28 times — second most in the NFL — but has proven to be a quick study when it comes to working around the nagging deficiencies in Cincinnati's pass protection.

Last week behind an offensive line patched together with backups, Burrow adapted. He got rid of the ball extra quickly, chipping away with intermediate passes. He extended plays with his legs, took zero sacks and had no turnovers in the Bengals' 31-20 win over the Tennessee Titans.

The victory gave the whole team a much-needed shot of confidence ahead of a bye week, which couldn't have come at a better time for the beat-up O-line regulars. The Bengals get back at it Nov. 15 in Pittsburgh against the Steelers (7-0).

That the Bengals don't have much to show for Burrow's gutsy performances is due largely to their failure to protect leads. Four of their five losses have been by five points or less and easily could have gone the other way.

Tyler Boyd (54 catches, 584 yards, three TDs) has been Burrow’s favorite target, but in each of the two games before the break the quarterback completed passes to seven players. Said Taylor: “He knows where to go with the ball."

Burrow's dad, a retired college football coach, said his son's matter-of-fact confidence was developed through an obsessive commitment to preparation and winning at every level, including a national championship at LSU in 2019.

“He was always a quarterback, so you had to show confidence and you had to be a leader," said Jimmy Burrow, who spent 14 years as defensive coordinator for Frank Solich at Ohio University. "And that really started in the third grade. So that’s a long time to develop your quarterback/football player personality.”

“I always preach about Joe Burrow,” said Cincinnati safety Jessie Bates III. “He goes in the locker room like, ‘Hey, they can’t stop us.’ He just has that swagger about himself. Our defense, we just feed off that.”

Long-suffering Bengals fans are starting to get aboard, too.

Burrow, who grew up near Athens, Ohio, 159 miles from Paul Brown Stadium, has given wary supporters hope the franchise has finally snagged a college superstar who can put the team on his back and carry it back to respectability.

Scott Houchens, 58, is a lifelong but understandably cynical Bengals fan and season-ticket holder who lives an hour up the road near Dayton. He was part of the socially distanced crowd of 9,712 that watched Burrow throw two fourth-quarter touchdown passes to seal the win over the Titans.

“Walking out of that stadium, you’re like ’Holy cow, do we have what we think we have? Do we dare invest ourselves emotionally in this young man?'" Houchens said. "It’s almost too good to be true.”