Top chef: As Vikings chase playoffs, Cook as busy as ever 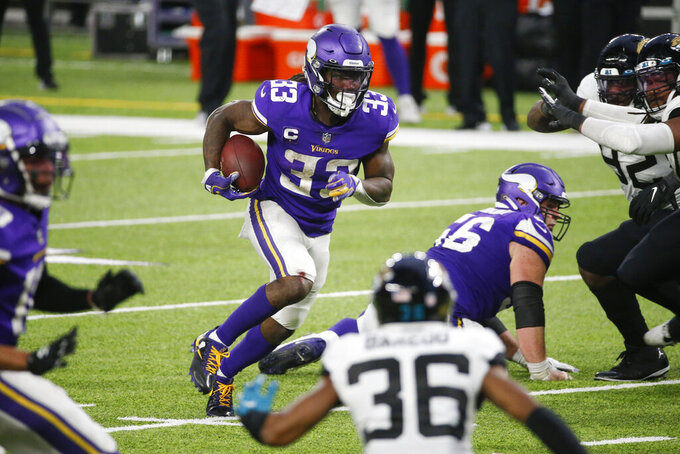 Minnesota Vikings running back Dalvin Cook (33) runs up field during overtime in an NFL football game against the Jacksonville Jaguars, Sunday, Dec. 6, 2020, in Minneapolis. The Vikings won 27-24. (AP Photo/Bruce Kluckhohn)

MINNEAPOLIS (AP) — The Minnesota Vikings wanted to keep Dalvin Cook fresh for the final stretch of their race for the playoffs, concerned about an increasing number of punishing hits on the star running back.

Then Cook touched the ball 38 times in an overtime win over Jacksonville, the second-highest single-game total in team history. The Vikings can't quit him, and he wouldn't want it any other way.

“I’ll probably need 38 more. I feel great, to be honest. I'm not pulling your coattails or nothing,” Cook said Wednesday, three days after his 32 carries for 120 yards and six catches for 59 yards helped the Vikings edge past the Jaguars to take control of the third and final wild card in the NFC.

After missing 19 of a possible 34 games over his first two seasons to knee and hamstring injuries, Cook's availability has since caught up to the team's strategy of revolving the offense around his enviable skill set. He has played in 27 of 30 games over the last two years.

“I’ve been taking some pretty good shots, but my process of getting my body ready has put me in position to stay fresh,” said Cook, who has 1,564 yards and 14 touchdowns from scrimmage to top the league despite missing one game to a groin injury. He's tied with Tennessee's Derrick Henry with 286 total touches.

The 25-year-old Cook, whose average of 26 combined rushes and receptions per game also leads Henry and the rest of the NFL, is on pace to produce one of the busiest seasons of the last decade.

Christian McCaffrey led the league with 403 touches last year. The only others with 400-plus totals in the last 10 years were Le'Veon Bell (406) in 2017 and DeMarco Murray (449) in 2014. Murray's single-season usage ranked sixth all-time, an outlier in this running back evolution favoring a varied attack in the backfield instead of a featured workhorse.

Last week, prior to the Jacksonville game, Cook was asked during his video conference call with reporters if he was concerned about wearing down, a question he dismissed like a stiff arm to a cornerback trying to arm-tackle him from a bad pursuit angle.

“Wear down. What is that?” Cook said with an uncharacteristic rise in his voice. “I’m a running back just like everybody else. I don’t think that’s a question you’d ask Derrick Henry or anybody else."

The Vikings (6-6) play Sunday at Tampa Bay (7-5), which ought to present one of the most difficult obstacles for Cook in 2020. The Buccaneers have allowed league-low averages in rushing yards per game (74.2) and attempt (3.28). Cook averaged 5.96 yards per rush over his first seven games, with a drop to 3.66 yards per rush over the last four games.

That doesn't mean Cook is actually wearing down, of course, but rather a reminder of how focused recent foes have been on keeping him from wrecking their game plan. Quarterback Kirk Cousins, meanwhile, has produced one of the finest stretches of his career over the last six weeks.

“Sundays are Sundays, right? I mean, you’re going to play and subject yourself to hits to get the win for the team and help however you can,” Cousins said. “What’s key from Sunday night to the following Sunday morning is being really smart about every minute of your day and how you use your time and how you use practice reps and how you recover.”

The Buccaneers blitz often, so Cook's pickup ability will come in handy for Cousins this week, too, along with the screen passes, toss sweeps and other plays offensive coordinator Gary Kubiak dials up to try to keep the Vikings on track. Cook is on pace to finish with the second-most yards from scrimmage in franchise history, behind Peterson (2,314) and his sensational 2012 season.

“All those great ones that I’ve been around,” Kubiak said, “the more they touch it over the course of the game, they get going and they’re eventually going to make something happen.”