From top down, Chiefs pushing for social justice initiatives 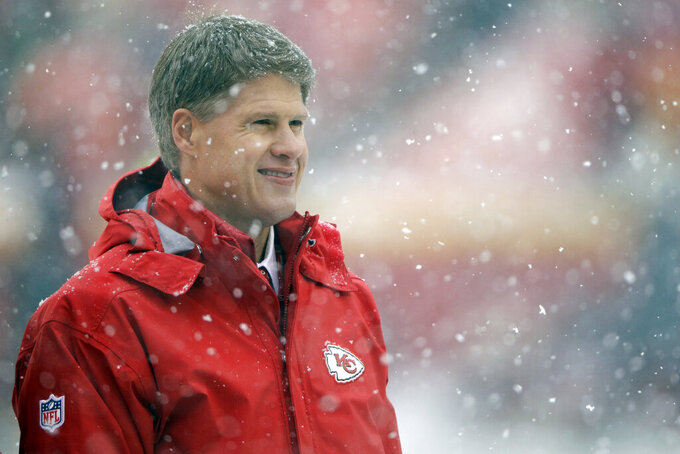 FILE - Clark Hunt, chairman and CEO of the Kansas City Chiefs, follows warmups before an NFL football game against the Denver Broncos, Sunday, Dec. 15, 2019, in Kansas City, Mo. Lamar Hunt was a champion of Black rights during the Civil Rights era of the 1960s. He grew up in conservative circles yet formed his own opinions of right and wrong. And when his football-loving son was born in 1965, those principles that Hunt instilled in his football franchise became instilled in Clark, who years later would succeed him as chairman of the Chiefs. (AP Photo/Charlie Riedel, File)

KANSAS CITY, Mo. (AP) — Two years before Clark Hunt was born, the Kansas City Chiefs made history by taking Grambling State defensive tackle Buck Buchanan in the American Football League draft, making him the first Black player from any college — much less a historically Black one — to be the first player selected first overall.

It was a testament to the progressive nature of Hunt's father, Chiefs founder Lamar Hunt, the trailblazing son of a Texas oil tycoon who helped form the American Football League when the National Football League refused to grant him an expansion team.

Hunt was a champion of Black rights during the Civil Rights era of the 1960s. He grew up in conservative circles yet formed his own opinions of right and wrong. And when his football-loving son was born in 1965, those principles that Hunt instilled in his football franchise became instilled in Clark, who years later would succeed him as chairman of the Chiefs.

“My dad really encouraged the players to get out there and use their platform to make a difference in the community,” Clark Hunt said. “A lot of those efforts over the decades have been focused on things that benefit the minority communities.”

Indeed, the biggest reason the Chiefs are among the most progressive teams in the NFL these days — during a new era of social justice initiatives — is that the reigning Super Bowl champions always have been that way.

When star quarterback Patrick Mahomes, fast becoming the face of the league, speaks out in support of the Black Lives Matter movement, the Chiefs in turn support him. When safety Tyrann Mathieu and defensive end Frank Clark discuss the importance of registering people to vote, Hunt and his top lieutenants respond: “How can we help?”

The answer, by the way, is discussions to turn Arrowhead Stadium into a voting location in November.

“You referenced Arrowhead being a polling station,” Hunt continued. “That's one of their big issues, is voter registration and getting people out to vote. We've worked with them and we're working with some organizations here locally to try to encourage people to get out to vote. We've made an effort to get all of our players registered to vote here. The icing on the cake would be if we could have Arrowhead be a polling station. We don't know if that's going to work out."

Yet the fact that discussions are taking place at the highest levels of Missouri government is a sign of just how seriously Hunt, team president Mark Donovan and the rest of the Chiefs franchise are taking such initiatives.

It's not as if there aren't players elsewhere in the NFL that are working for social justice, or for increased voting and better representation in government. But there are few organizations that are so vocally in support of them.

It's not just Hunt, either, though he sets the tone. Chiefs general manager Brett Veach and coach Andy Reid also are outspoken in their support, shrugging off the antiquated notion that having opinions and taking action outside the walls of the football facility can be a distraction or somehow detrimental to what happens on Sunday.

“I like when people come together. I'm about that,” said Reid, who grew up in the melting pot of Los Angeles in the 1960s, and whose father was an artist that championed equality. “I've had a Native American athlete at Northern Arizona — phenomenal person. I've had Hispanic athletes. I've had obviously Black athletes, but from different areas of the world. I've had white athletes, and it's so unique how they all get together. I just appreciate the world I get to live in with athletics.”

Reid understands taking any kind of stance can be divisive, particularly these days. So do Mahomes and Mathieu, who know that everything they say and do will be dissected and discussed in the wild world of social media.

Yet they dismiss any political concerns in favor of a simple idea: “Do what you think is right.”

“I'm going to do whatever I can to fight for equality for all people,” said Mahomes, who has a white mother and Black father. "I'm not worried about people and how they're going to do negative stuff back to me. I am worried about doing what's right for humanity and making sure that all people feel equal.”

There have been missteps over the years, such as the Chiefs' use of Native American imagery that drew widespread condemnation and has been slowly phased out. Members of the franchise have expressed thoughts and taken stances that have proved regrettable. Opinions on a number of topics, such as Hunt's preference that players stand for the national anthem, have changed amid the changing landscape of American life.

The core values that Lamar Hunt set down remain, though. They're the values that gave Buchanan a chance with the Chiefs in 1963, and that are giving Mahomes and the rest of the team the platform to speak out nearly 60 years later.

“My dad set a great example for me and my siblings on a lot of issues. And probably his greatest strength was how he treated people," Clark Hunt said. “He didn’t care where you came from, what your background was, what your race was. He treated everybody he met with respect and appreciation. That’s been a lesson that we’ve all learned, and just bring it forward to what’s going on with racial equality and social injustice. I think Andy probably said it as well as anyone: 'We just need to love our neighbor.' And if we all do that, this world is going to be a whole lot better place.”