Top picks from '16 draft face off in Washington-Detroit game 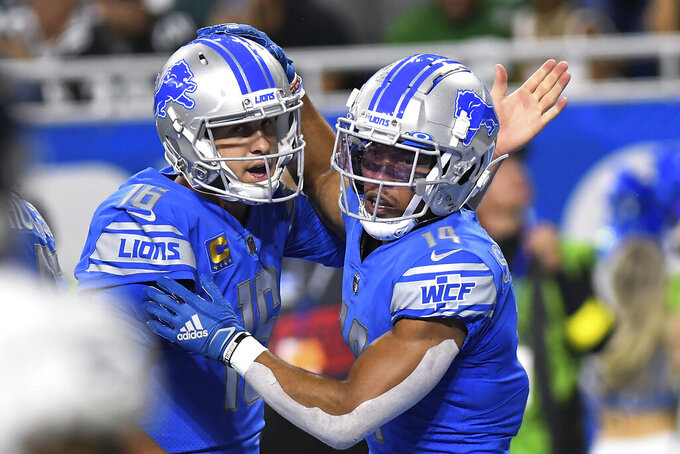 OPENING LINE: Lions by 1 1/2, according to FanDuel SportsBook.

TURNOVER DIFFERENTIAL: Commanders minus-2; Lions minus-1.

COMMANDERS PLAYER TO WATCH: QB Carson Wentz. Playing on his third team in three years, he was 27 of 41 for 313 yards and threw four TD passes for the first time since 2017 when he played for the Eagles.

LIONS PLAYER TO WATCH: WR Amon-Ra St. Brown. If he catches at least eight passes for the eighth straight game, the second-year pro will join Antonio Brown and Michael Thomas as the three players in NFL history to pull off the feat.

KEY MATCHUP: Detroit's D'Andre Swift against Washington's defense. The third-year running back had career highs with 144 yards rushing and 175 yards of offense against Philadelphia. If the Commanders can slow down Swift, they will take away QB Jared Goff's ability to set up play-action passes.

KEY INJURIES: Commanders S Kam Curl (right thumb), who missed the season opener, and RG Wes Schweitzer (hamstring) are questionable. ... Rookie TE Cole Turner (hamstring) is expected to make his debut after missing Week 1. ... Rookie DT Phidarian Mathis (left knee) is expected to miss the remainder of the season. ... Lions C Frank Ragnow (groin, foot) will miss a second consecutive game. ... OG Halapoulivaati Vaitai, who is on IR, had back surgery this week and may miss the entire season.

STATS AND STUFF: The top two picks in the 2016 draft will be under center, and they'll break a 1-all tie in their head-to-head series. Detroit QB Jared Goff was selected No. 1 by the Los Angeles Rams and Commanders QB Carson Wentz was selected by Philadelphia one pick later. Wentz beat Goff in 2017, and Goff won three years later. ... Washington is aiming for its first 2-0 start since 2011. ... Wentz is the first player in Washington history to throw for four TDs in his debut with the team. ... WR Jahan Dotson became the second rookie since 1970 and first in 18 years to have a game-winning TD catch in the final two minutes of regulation or overtime in his NFL debut. ... The Commanders signed undrafted free agent Donovan Jeter, a former Michigan player, to replace Mathis on the roster. ... CB William Jackson led Washington with nine tackles in Week 1. ... S Darrick Forrest had his first career forced fumble and made five tackles, filling in for Curl. ... Goff was 21 of 37 for 215 yards with two TDs and an INT against the Eagles. ... Detroit RB Jamaal Williams had a career-high two rushing TDs in Week 1, scoring twice in a game for the fourth time in his career. ... S Tracy Walker had a team-high 11 tackles against Philadelphia despite being ejected in the third quarter for swiping in a scrum after being flagged for hitting QB Jalen Hurts near his head when he was down. ... CB Jeff Okudah had a career-high 10 tackles last week. ... DE Aidan Hutchinson, the No. 2 pick overall, was credited with one assisted tackle in his debut. ... In eight of 18 games under coach Dan Campbell, the Lions have given up 30-plus points.

FANTASY TIP: Washington RB Antonio Gibson had 130 yards from scrimmage in the season opener and seems set up for another productive day at Detroit. The Lions allowed Philadelphia to run for 216 yards, gaining 5.5 yards per carry, and four TDs on the ground from four players.