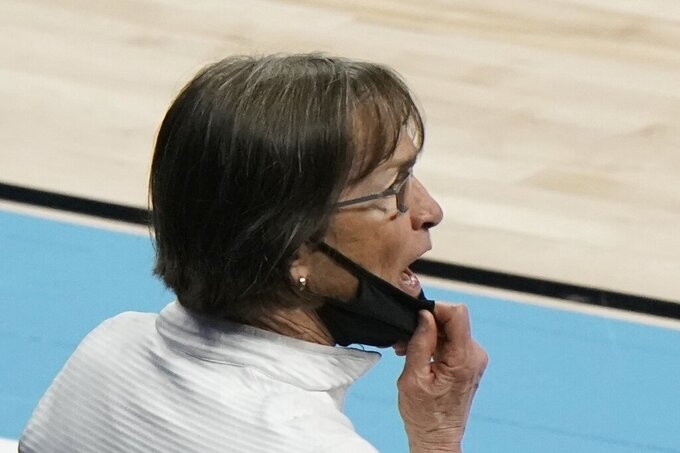 Stanford head coach Tara VanDerveer yells to her players during the second half of an NCAA college basketball game against Missouri State in the Sweet 16 round of the Women's NCAA tournament Sunday, March 28, 2021, at the Alamodome in San Antonio. (AP Photo/Morry Gash)

Tara VanDerveer rooted for Oregon to reach the Elite Eight — supporting the Pac-12 after all.

Her Stanford Cardinal instead will face the Louisville Cardinals, who used a late surge to defeat the Ducks. The overall top-seeded Cardinal (28-2) will face No. 2 seed Louisville (26-3) on Tuesday night for a place in the Final Four.

Yes, it's Cardinal vs. Cardinals. And both teams are determined to return to the Final Four and take care of unfinished business.

Louisville eliminated Stanford in the 2018 Sweet Sixteen with an 86-59 victory before going on to lose in the national semifinals to Mississippi State. Then, a year later, the Cardinals fell to Connecticut in the Elite Eight.

It's been a long time between Stanford titles under VanDerveer. It has been since 1992.

“They're a really good team, they're coached by a really good coach, so we've just got to prepare and we've got to focus like we've been doing in the past,” Louisville senior guard Dana Evans said.

Louisville coach Jeff Walz praised his guard play and the way the Cardinals attacked the ball to beat Oregon, noting, “Our ball pressure had to be elite, and it was.”

They will have to do it again given Stanford's multiple perimeter threats.

Some notables things to look for heading into the Louisville-Stanford Elite Eight matchup:

As a senior in high school in tiny Cashmere, Washington, highly touted Louisville recruit Hailey Van Lith had a special guest watch her play in January 2020. Just more than two weeks before he died, Kobe Bryant and daughter Gianna — who perished with him in the helicopter crash on Jan. 26, 2020 — flew to rural Washington State to support Van Lith.

“Tara always talks about this: She didn’t recruit any of us for our defense,” said fifth-year senior Anna Wilson, cheered all tournament by big brother and Seattle Seahawks quarterback Russell Wilson.

Finding a way to somehow slow down the perimeter threats will be paramount.

Louisville limited Oregon to 14 points in the first half of Sunday's 60-42 Elite Eight win.

“I think we are playing our best defense right now, I think it's starting to come together,” Evans said. "We're able to help each other, get in the passing lanes, pressure the ball. We know at this time of year you can't make many mistakes.”

Even after decades of doing this and being successful year after year, VanDerveer is making sure to enjoy the ride this time.

This is her 35th season at Stanford and this will be the Cardinal's 21st Elite Eight — and they hope a 14th Final Four.

“You just have to enjoy the moment," VanDerveer said said. "I’m a very live-in-the-moment person.”

Stanford still doesn't think it has peaked yet. After a second-round win against Oklahoma State, the Cardinal considered it a C performance. Then the team gave itself a B after beating Missouri State on Sunday.

“I still don't think we're playing our basketball yet,” Wilson said. “We're playing really well, we're clicking in a lot of different ways than usual I think each player has a lot more to give the team. I have more to give to the team. I think that with the trajectory that we're going in I think it will be good timing. We don't want to peak too early, we want to peak right at the right time. ... I think there's another gear that we can get into.”

So, the Cardinal are counting on a couple of A's ahead to keep their run going.

TO DUNK OR NOT TO DUNK

In a December game at rival California, Stanford's Francesca Belibi became the eighth woman to dunk in a game. She nearly had a chance against Missouri State, but made what VanDerveer considered the best decision by not going for it this time and still scored on the play with a layin.

The sophomore forward typically tries one every warmup.

“She's comfortable dunking off of a dribble. We do have a lob play but it's not necessarily for a dunk but she gets up on that lob play,” VanDerveer said. “Fran did some great things for us. ... I was glad to see her just finish on that play. ”