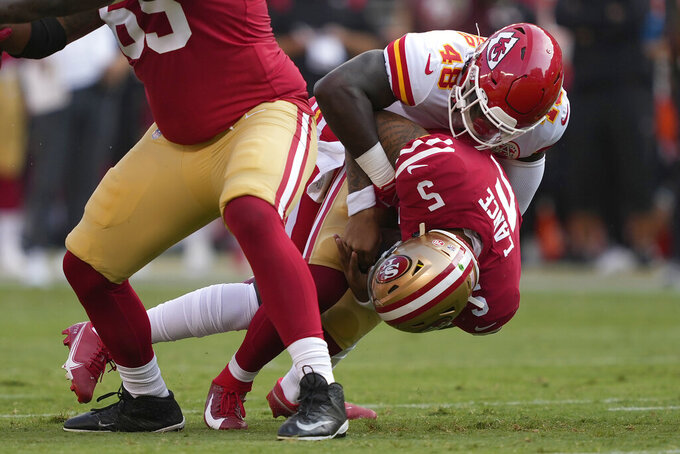 SANTA CLARA, Calif. (AP) — Trey Lance's up-and-down debut performance in the preseason has done little to alter the timeline the San Francisco 49ers have for when their rookie quarterback will get more time with the first team in practice and possibly take over as starter.

Lance had a few dazzling plays on Saturday night against the Kansas City Chiefs highlighted by an 80-yard touchdown pass to Trent Sherfield but also showed some signs of inexperience with some off-target throws and inability to avoid sacks.

So as the Niners head into the week of their second preseason game following two joint practices against the Los Angeles Chargers, the pecking order at quarterback remains Jimmy Garoppolo as starter with Lance mixing in just occasionally with the first team.

“I haven’t really defined that for myself either,” coach Kyle Shanahan said Sunday about what Lance needs to show to get more time in practice with the starters.

“When I think it feels right, when he seems ready, when I think the team seems ready. We’ll continue to mix them in there. But I don’t plan on just doing that completely. ... I wish I could help him out there longer. I know he enjoys playing. He’s only been able to play one game in over a year. But I think it was good for him to get out. I think he started out good, got a little excited sometimes which he does. And you get a little excited, some of your technique and stuff you lose which will be fun to watch with him."

Lance threw the 80-yard TD pass on the first play of his second drive, making a half roll to his left, stopping and throwing back across the field to Sherfield. The Niners got a field goal on their next drive and then came up empty on the final five possessions with Lance in the game, getting just two first downs on those drives.

Lance finished 5 for 14 for 128 yards. He was hurt by three dropped passes by his receivers but also nearly threw two interceptions and recovered his own fumble on one of his four sacks.

The Niners invested heavily in Lance, trading three first-round picks to get up to No. 3 in the draft. Despite inexperience in college when Lance played just one full season at FCS-level North Dakota State and only one game last season, Shanahan saw enough to believe that Lance has the tools to be a franchise quarterback.

But with Garoppolo in place as starter after helping San Francisco reach the Super Bowl in the 2019 season, the Niners aren't in a rush to make the change despite some of the highlight plays from Lance so far in practice and in the first exhibition game.

“We all know Trey has the ability to play well and do some special things,” Shanahan said. "Being in practice and you saw a little bit in the game, but that’s not playing quarterback in the NFL. You’ve got to have the ability to get into the club, but it’s how you respond to adversity, how you can play over the course of a game, when you do make a mistake, can you come back and make another big play?