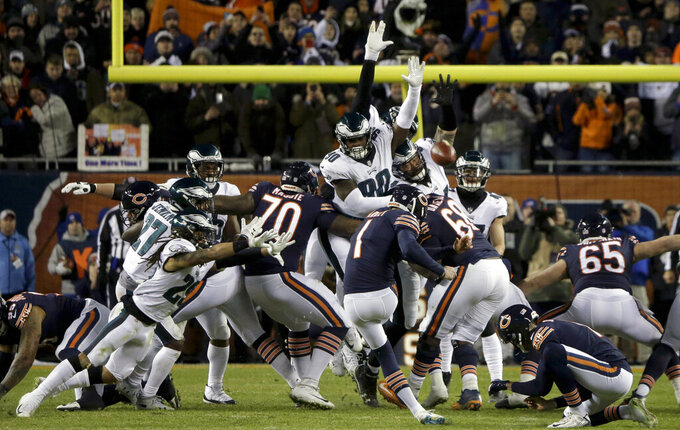 FILE- In this Jan. 6, 2019, file photo, Chicago Bears kicker Cody Parkey (1) boots a field goal-attempt during the second half of an NFL wild-card playoff football game against the Philadelphia Eagles in Chicago. Eagles' Treyvon Hester (90) tipped Parkey's attempt just enough to send the ball bouncing off the upright and crossbar, securing a 16-15 win at Chicago in the wild-card round. (AP Photo/David Banks, File)

The Eagles (10-7) are heading to New Orleans (13-3) for a divisional playoff game Sunday because Hester barely tipped Cody Parkey's 43-yard field-goal attempt just enough to send the ball bouncing off the upright and crossbar, securing a 16-15 win at Chicago in the wild-card round.

The 6-foot-2, 304-pound defensive tackle didn't even see where the ball went after he touched it.

"I felt I didn't get enough of it because when I looked back, it looked like it was on the right path," Hester said. "I turned back and it bounced off and the rest was history. I didn't see it bounce off because I was so frustrated. I heard the reaction of the crowd and saw the team running out there. It was a surprise. I couldn't believe it happened."

Hester began the season on Philadelphia's practice squad after Oakland released him at the end of training camp. He was a seventh-round pick by the Raiders out of Toledo in 2017 and appeared in 14 games as a rookie.

The Eagles promoted him to the active roster in October and he worked himself into becoming a part of the defensive line rotation. Hester has played anywhere between 16 and 58 percent of the snaps in 12 games. He got his first NFL sack on Deshaun Watson in Week 16 and was on the field for 12 snaps against the Bears.

"Treyvon has come up big for us," defensive coordinator Jim Schwartz said. "He got his hand up and did what he was supposed to do at the right time and we were able to get the win."

"I'm trying to make a name for myself but I got a lot of vets out here helping me out, helping me improve my game, so I'm grateful," he said. "Without Haloti Ngata, I wouldn't have been able to get the push that I got because we both get down there and try to get the guy in front of us out of the way, so credit to him."

"First of many," Hester said. "It's definitely a big confidence booster and I would like to continue to make more plays and help this team win any way I can."

Hester has found his role on the Eagles, giving the defending Super Bowl champions an opportunity to continue their quest for a repeat.

"It's fulfilling," Hester said. "Philadelphia proved me right, allowed me to show what I can do. I owe them everything."