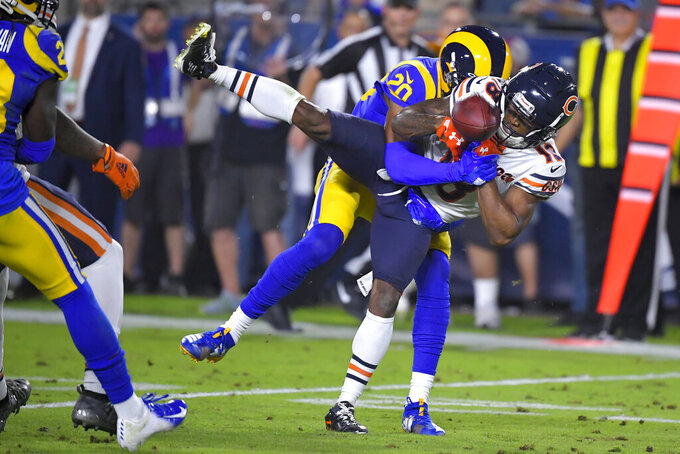 LOS ANGELES (AP) — Mitch Trubisky wanted to finish out the game, but the decision was taken out of his hands

The Chicago Bears’ quarterback said he sustained a right hip injury in the first half of a 17-7 loss to the Los Angeles Rams on Sunday night, which prompted coach Matt Nagy to replace him with Chase Daniel in the fourth quarter.

Nagy noticed Trubisky was struggling to create power from his lower body after being alerted to the situation by quarterbacks coach Dave Ragone in the second half. What Nagy saw was Trubisky making throws that were all arm, ultimately prompting him to pull the third-year quarterback aside and find out what was happening.

“I said, ‘Listen, here’s the deal. We got to know, and you got to be honest with us as to where you’re at.’ And it was hard for him to say that. It was really hard, but he told me exactly how he felt, and I made the decision to put Chase in there at that time,” Nagy said.

Daniel was 1 of 4 passing for 9 yards on his lone drive leading the offense, which ended in a turnover on downs.

Trubisky was 24 of 43 passing for 190 yards, one touchdown and one interception. He was 7 of 9 for 66 yards on the Bears’ touchdown drive in the third quarter, which ended with a back shoulder 14-yard scoring throw to Tarik Cohen.

The difference on that drive, Trubisky said, was the effective pass protection he received.

“The O-line did a great job just allowing me to sit back there, and I didn’t really have to move around on that drive,” Trubisky said. “Just dink and dunk down the field, and receivers got open, and Tarik made a great play on that back shoulder route to score. I just felt like I could keep doing that and that’s why I kept going.”

Nagy said he was not aware of the specifics of the injury, apart from his brief conversation with Trubisky on the field. That was seemingly evident from some of the calls Nagy made in critical situations in the second half that put Trubisky on the move, including an option pitch to David Montgomery to the short side of the field on third-and-1 that resulted in a tackle for loss by Rams linebacker Samson Ebukam.

“You appreciate that the kid did not want to come out, but at the same time we had to know exactly what was going on,” Nagy said.

Trubisky already missed one game this season because of a dislocated shoulder he sustained against Minnesota on Sept. 29, and he hopes to avoid having to sit out more games. However, he was not sure as to the extent of the hip injury, other than that he hoped to play against the New York Giants next week if able to do so.

“You just want to be out there with your team,” Trubisky said. “But if you’re not 100 percent, you can’t help the team. I’m not doing the team any favors if I’m not able to run around or throw the ball with accuracy because I’m throwing with all arm. Just you got to be smart from that factor, but I’m going to fight as long as I can to try to be out there with my guys.”

Trubisky’s injury represents another blow in what is quickly becoming a lost season for the Bears, who dropped to 4-6 less than a year removed from a 12-4 campaign and NFC North division title. The uncertainty about the situation was evident from Trubisky’s teammates, with wide receiver Anthony Miller saying he pulled Trubisky aside and told him to stay positive, even if he wasn’t entirely clear about the situation.

And if the injury were to force Trubisky out of the starting lineup, Miller said that is out of his control.