Turbin the other part of the running back reunion in Seattle 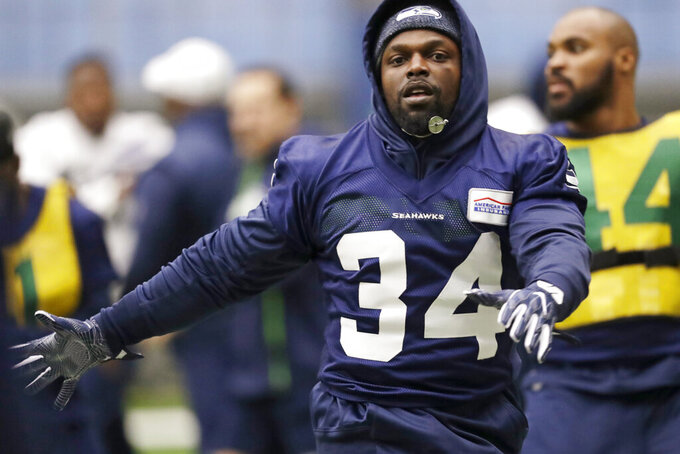 RENTON, Wash. (AP) — When Robert Turbin made his first trip to Seattle for a workout with the Seahawks, he packed enough clothes to stay for an extended period.

He ended up going back to Sacramento, California, unsigned after the workout ended. But the bag remained packed just in case another call came.

“I actually left my bags packed in my car, in the trunk of my car. I said, ‘Somehow, someway, hopefully we’ll get back there.’ Then, the next week came, and here I am,” Turbin said on Thursday. "I felt really good about the workout. They just needed other needs at the time. Here I am now.”

The call Turbin was hoping for came last Sunday night when the Seahawks realized they needed multiple running backs after three major injuries in the span of three games. And while the return of Marshawn Lynch is understandably getting most of the attention, the signing of Turbin is also important.

No one expects Lynch to come in after more than a year away from the game and be able to handle a full workload for this Sunday's matchup against San Francisco. The same could be said of Turbin, who hasn't played since Week 6 of last season. But in unison, the duo that shared backfield duties for the Seahawks from 2012-14 may bring just enough of what Seattle needs this week against San Francisco and into the postseason.

“Both of these guys are good players. They’ve been through a lot. They know a lot of stuff. Football comes easy to them,” Seattle coach Pete Carroll said. "Still, they’re going to have to put together a really good week to really have the hold on it so they can have command and feel confident and play like they want to play.”

Turbin's never been able to match the same level of production he had in Seattle when he served as Lynch's backup. For the three seasons he was with the Seahawks, Turbin played in every game, averaged 4 yards per carry and rushed for more than 250 yards in each season.

After leaving Seattle following the 2014 season, Turbin played for Cleveland, Dallas and Indianapolis. He was never able to win a starter's role, fell into being a lightly-used backup and was suspended for the first four games of the 2018 season.

He had just one workout — back in the spring — before Seattle called a couple of weeks ago.

"We wanted to keep football as a priority for 17 weeks and we did that, and the opportunity presented itself,” Turbin said.

How the carries will be split between Lynch, Turbin and rookie Travis Homer is unknown. Even the Seahawks coaches may not know until Lynch and Turbin get their initial carries against the 49ers and see how they respond to being hit for the first time in more than a year.

Turbin understands that as much as he worked out daily with the hopes of getting another NFL shot, it doesn't come close to simulating what it'll be like on Sunday night.

“You throw the pads on and the helmet and the intensity of the game is obviously higher,” Turbin said. “That’s really hard to mimic when you’re training. Guys talk about it all the time when they come back for training camp. It’s like, man, I thought I was in shape until I got here to training camp. We’ll see how it goes.”

NOTES: Seahawks DE Jadeveon Clowney (core) said he intends to play after missing the past two games. Clowney missed Week 15 because of illness and last week still dealing with his core muscle injury. Clowney suffered the injury in the first matchup with the 49ers and is hoping Seattle can win and possibly get a first-round bye in the playoffs for more recovery time. ... T Jamarco Jones was limited in practice on Thursday listed with a shoulder injury. Jones started at left tackle last week with Duane Brown out.