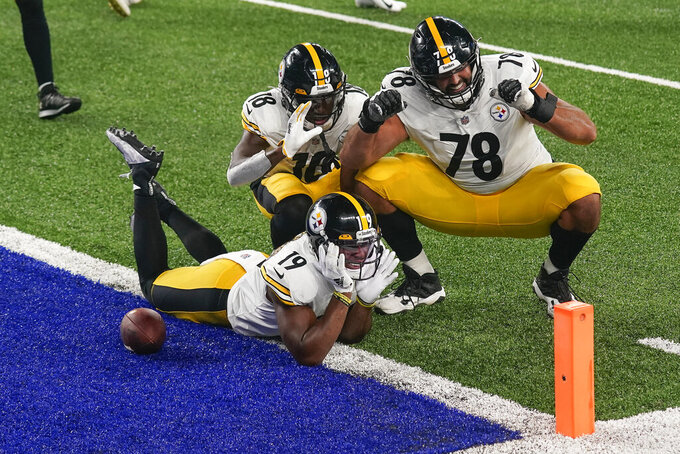 PITTSBURGH (AP) — The Pittsburgh Steelers stressed the need for unity as the team weighed how to properly promote social justice.

It didn't quite work out that way during their season-opening win over the New York Giants, and left tackle Alejandro Villaneuva finds himself again in the middle of a difficult conversation about self-expression on a volatile subject.

Three years ago Villaneuva — a graduate of West Point and a decorated U.S. Army veteran — found himself standing alone with his hand over his heart as the national anthem played while his teammates remained out of sight in a nearby tunnel. On Monday night, while the rest of his teammates honored Antwon Rose Jr., a Black Pittsburgh teenager shot in the back and killed by a white police officer in 2018 by emblazoning his name on a white strip on the back of their helmets, Villanueva instead chose to honor Alwyn Cashe, a Black soldier who died from injuries sustained in Iraq in 2005.

While Steelers head coach Mike Tomlin said Villanueva approached him about the decision before the game, quarterback Ben Roethlisberger and defensive tackle Cam Heyward — both captains — admitted they were caught off guard.

“I did not know about Al's choice for the back of his helmet,” Roethlisberger said. “Obviously, it’s his choice. That’s the amazing thing about the country we live in. Unfortunately, it is what it is.”

Tomlin has encouraged his players to speak out and take action if they do so respectfully, guidelines Tomlin believes Villanueva's decision did not violate.

“We are going to support our players in however they choose to participate and express themselves or to not participate or not express themselves, as long as they do so thoughtfully and with class," Tomlin said Tuesday. "And so that is a blanket approach that we have had. I think it needs no further explanation in terms of our support for Al Villanueva or anyone else in terms of what they do or do not do in terms of social justice.”

Rose died in June, 2018 after being shot in the back, arm and side of the face by East Pittsburgh Police Officer Michael Rosfeld. Rose had been riding in an unlicensed taxi that had been involved in a drive-by shooting minutes earlier when Rosfeld pulled the car over and shot the 17-year-old as he ran away. Rosfeld was charged with homicide but acquitted in March 2019.

“Let me very very very clear,” Kennedy wrote in a Facebook post. “The Pittsburgh Steelers took a team vote. Obviously one person didn’t like the results so they chose to do something different. I have nothing against vets and absolutely appreciate everything that they have done and continue to do for us. But this one person showed us exactly who he is and obviously he didn’t approve of how the vote turned out.”

Villanueva has not spoken to the media since the end of the 2019 regular season. Heyward admitted he was “surprised” by Villanueva's choice but said he would not attempt to explain Villanueva's actions for him.

The 31-year-old Villanueva is a two-time Pro Bowler who took an unlikely path to the NFL. He served three tours in Afghanistan before joining the Philadelphia Eagles practice squad, eventually making his way to Pittsburgh and a starting job. In 2017 he found himself as an unlikely touchstone on the debate over the merits of protesting during the national anthem when he stood on turf at Soldier Field with his hand over his heart while his teammates remained out of sight.

Villanueva called the optics of that chaotic afternoon a miscommunication. That wasn't the case this time. Villanueva wrote Cashe's name down in black marker on the white tape he used to cover the bottom of his helmet. Cashe was on patrol in Samarra, Iraq in 2005 when the vehicle he was traveling in struck an improvised explosive device. Cashe sustained severe burns but helped six soldiers inside the vehicle escape safely. He died on Nov. 8, 2005 in Texas and was posthumously awarded the Silver Star.

No member of the Steelers' organization hinted at any problem with Villanueva's right to honor Cashe. Heyward hopes that Kenney understands the team remains committed to making a difference not just with high-profile displays on the field, but by their actions off it.

“We chose this first game to represent her son and ... we chose to support her son and if she wants to make the community closer, that’s what we’ve got to do," Heyward said. "Was it perfect at the end of the day? No. But as a collective unit we wanted to support her and her family.”