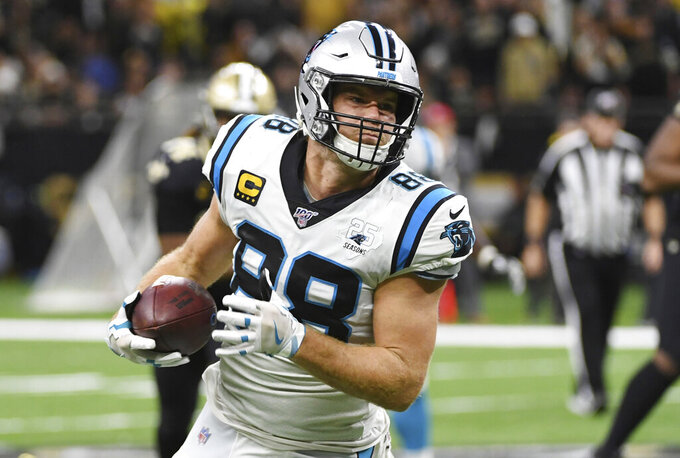 FILE - In this Sunday, Nov. 24, 2019 file photo, Carolina Panthers tight end Greg Olsen (88) runs, during the second half at an NFL football game against the New Orleans Saints in New Orleans. Veteran tight end Greg Olsen is retiring from the NFL to become a broadcaster. Olsen announced Sunday, Jan. 24, 2021 that he is ending his 14-year career to join Fox as a game analyst. (AP Photo/Bill Feig, File)

Veteran tight end Greg Olsen is retiring from the NFL to become a broadcaster.

Olsen announced Sunday that he is ending his 14-year career to join Fox as a game analyst.

“Proud of what I was able to accomplish in this league, proud of the relationships and everything that the game has given me," Olsen said on Fox. “But sometimes, when it’s time it’s time, and my time in the NFL now has come to an end. I’m excited for the next chapter."

A 2007 first-round draft pick by the Bears, Olsen spent his first four pro seasons in Chicago before being traded to Carolina for a third-round selection. It was one of the better transactions the Panthers have made.

In his nine seasons with Carolina, Olsen made three Pro Bowls and one Super Bowl and had 524 catches for 6,463 yards and 39 touchdowns. He also was a team leader for the Panthers.

Olsen spent his final season in Seattle, making 24 receptions and scoring once. Overall, he made 742 receptions for 8,683 yards and 60 TDs.